On Wednesday, the Dallas City Council unanimously approved the construction contract for Carpenter Park, a 5.6-acre redevelopment of Carpenter Plaza near DART’s East Transfer Station that aims to connect downtown with Deep Ellum and East Dallas. The land has not functioned as a park since roadway reconfigurations disrupted it in 2011.

The new green space is the result of a public-private partnership between the city of Dallas Park and Recreation Department and Parks for Downtown Dallas. It is one of four priority parks that the the city identified in its 2013 Downtown Parks Master Plan Update. To make four new parks a reality, Parks For Downtown Dallas brought $55 million to the table to pair with $35 million in 2017 bond funding and $4.4 million in 2006 bond funding.

When finished, it will be the largest park in Dallas’ core, topping Klyde Warren Park by nearly half an acre.

Bounded by Live Oak Street and Pacific Avenue and extending up to North Cesar Chavez Boulevard, the park will include spaces for children and dogs to play, a basketball court, interactive fountain, walking paths, and a pavilion. It will also house two sculptures, including a reimagined version of Robert Irwin’s Portal Park Piece (Slice), the second-most valuable piece of public art owned by the city of Dallas. New York-based firm Hargreaves Jones is behind the new design of the park. 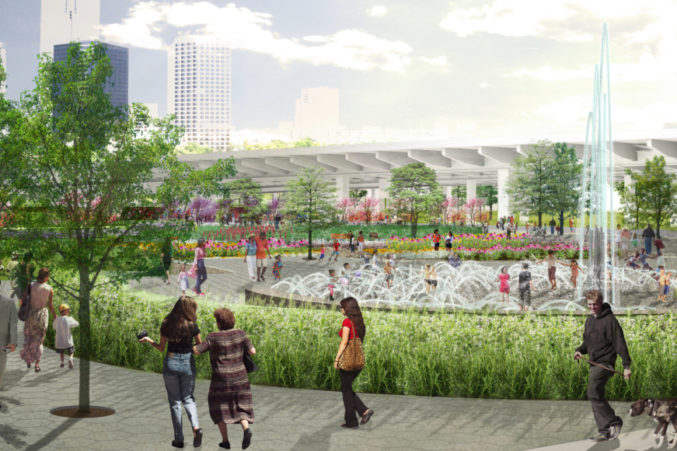 Carpenter Park is among many public works efforts in the area near I-345. The city redid several roads in the area to form a continuous landmass, which made space for the park.

Removing I-345 has been a controversial vision since 2010. The highway connects I-45 to Central Expressway, dividing downtown from Deep Ellum. Its removal would supply more than 240 acres of space that could house retail, residential, or restaurant concepts that could bolster the local job market.

Just last month, the City Council had discussed delaying this very vote on Carpenter Park’s construction to August. As of now, construction is estimated to begin in September 2020 and continue into mid-2022.

“The approval of the construction contract is a significant step towards making this park a reality for Dallas citizens and visitors alike,” Meadows said in a release.

Phase two of the project will expand the park into the median between North and South Central Expressway and include a skatepark and basketball courts. The City will vote on this phase in the next few years.