The Cedars is sometimes referred to as the artists’ district of Dallas because of its concentration of creatives. That’s highlighted in The MAC’s latest show, HYPERLOCAL, which the gallery is presenting in partnership with neighboring nonprofit, the Cedars Union. The exhibit is a curated selection of works by studio artists from the Cedars Union, including Jeremy Biggers, Sheryl Anaya, Riley Holloway, Carmen Menza, Kevin Owens, Desireé Vaniecia, and others. The artists vary greatly in their practices, but are tied together by a few common themes: personal loss, alien landscapes, ecological issues, social and cultural commentary, and individuality. The exhibit is on view through December 21; find The MAC’s hours and location here.

The Goss-Michael Foundation collaborated with esteemed gallery Unit London for its latest show, a collection of new paintings by South African artist Ryan Hewett. It’s Hewett’s first solo exhibition in Texas and his second in the U.S. The artist made a name for himself by painting expressive, semi-abstract portraits of public figures and everyday people. While his older work is characterized by that style of portraiture, his latest work in Nothing New Under the Sun shows the artist experimenting with a reductive, almost Cubist style. Hewett has also shifted to depicting the human figure rather than just the face, something which lends itself well to his new vocabulary of geometric shapes. Ryan Hewett: Nothing New Under the Sun is on view at The Goss-Michael Foundation through January 11, 2020. 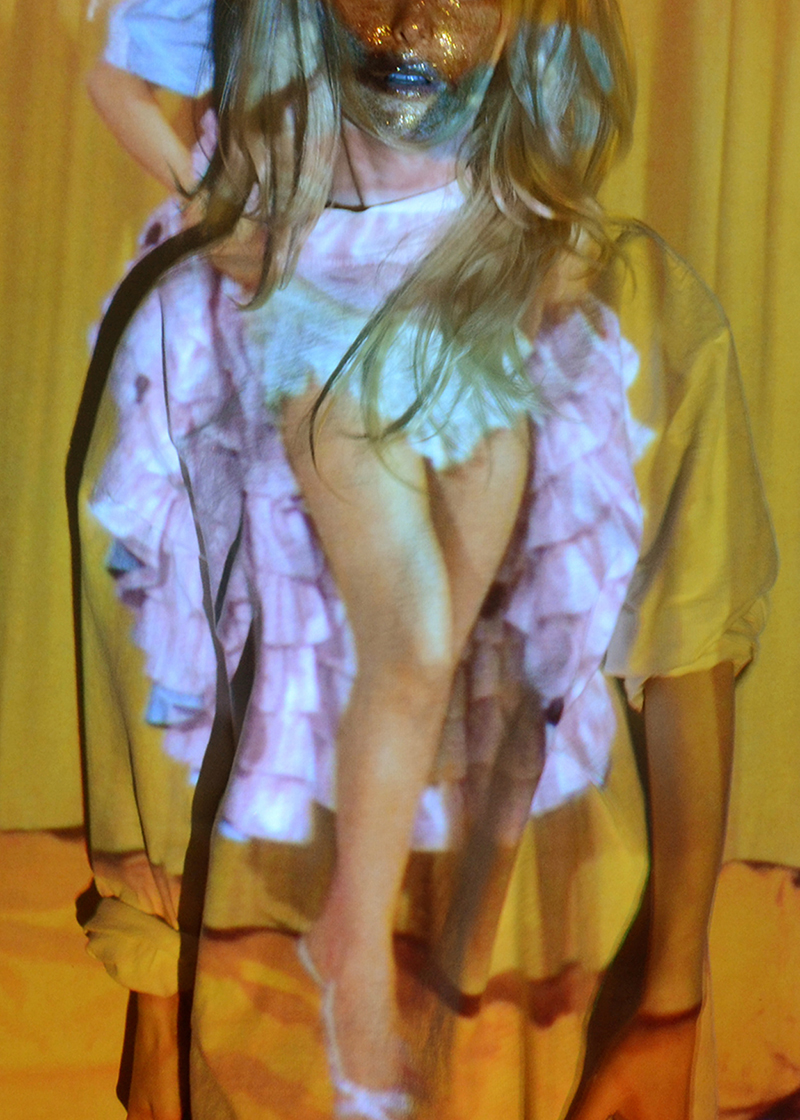 Dallas-based multi-disciplinary artist and actress Hillary Holsonback shows a series of Polaroid self-portraits called Pinups at Sean Horton Presents in Oak Cliff. The photography series depicts Holsonback with images–often portraits of old Hollywood stars–projected onto her body. She moves with blurred motion in the photos, making it difficult to distinguish the artist from the characters she superimposes onto herself. Several of the Polaroids have been blown up and tacked on the wall, while others are showcased in their original size in small frames. The exhibit is on view through January 4, 2020.

The Dallas Museum of Art has a couple new things to check out. If you haven’t seen Wanda Koop’s Dreamline yet, head to the Focus II Gallery. After that, take a stroll through the museum’s concourse, which now houses a sprawling, immersive mural by Brazilian artist Sandra Cinto. You can read more about that here. There’s also a pretty cool video installation on view. After enjoying the museum’s free offerings (that’s most everything), pick up a special exhibitions ticket ($16) for speechless: different by design. The interactive, Instagram-friendly new exhibit is fun for all ages. You can read my write up of it here.

Galleri Urbane Marfa + Dallas ushered in a trio of exhibits over the weekend: Sight-reading by abstract painter Arden Bendler Browning, Time/Life by multimedia artist Dennis Koch, and The Gift Edit: Contemporary Ceramics by Sam Mack, Melinda Laszczynski, Aisha Bryant, Lindsey Howard, and Iren Tete. I haven’t had the chance to see the new shows, but after getting some sneak peeks on social media, I’m particularly excited for Koch’s Time/Life portion. The three exhibits are on view through December 28.