When the Cedars Union was founded in 2015, its home neighborhood was having a long-awaited moment in the sun. The historic Ambassador Hotel was still standing tall, ready to be revived into a luxurious apartment building with retail shops on its ground floor. Alamo Drafthouse was preparing to open its first Dallas location with a rooftop bar on Lamar. Four Corners Brewing Company was relocating from Trinity Groves to South Ervay. The bowler hat was there, but that dang umbrella wasn’t. The area was fraught with possibility. And it was already popular with artists. So, the Bowdon Family Foundation, under the leadership of two of its youngest, purchased the Boedeker Ice Cream plant and decided to create a new kind of studio space.

“We were looking for a way to have more direct contact with the community,” says executive director Matthew Bowdon. “My sister and I both went to art school. I went to SCAD, my sister graduated from TCU, and we sort kind of experienced the same thing when we were leaving the collegiate environment, where you get this incredible education and have access to these multi million dollar shops, and you get pushed out into the real world and you no longer have the community that you relied on, or the resources that you used, and you just have to try to figure out how to do it on your own.”

The siblings had the idea to create a coworking space, but this was before the trend really caught on in Dallas, and there weren’t many examples to model it after.

“The Makerspace movement had already started, and I was a member of Dallas Makerspace at the time, and really liked what they were doing with that community-run environment, but we also felt that it could use a little more structure, and a bit more top-down perspective so you can have more of the carry over from the collegiate side,” says Bowdon.

The Cedars Union spent its first few years figuring out its purpose in the city. (The ice cream factory was a huge undertaking, too big for the Bowdon Family Foundation to take on alone, so that plan was put on pause.) Since it moved into “The Annex,” a smaller structure next door to the Boedecker building, a year ago, it’s become a hub for local creatives. 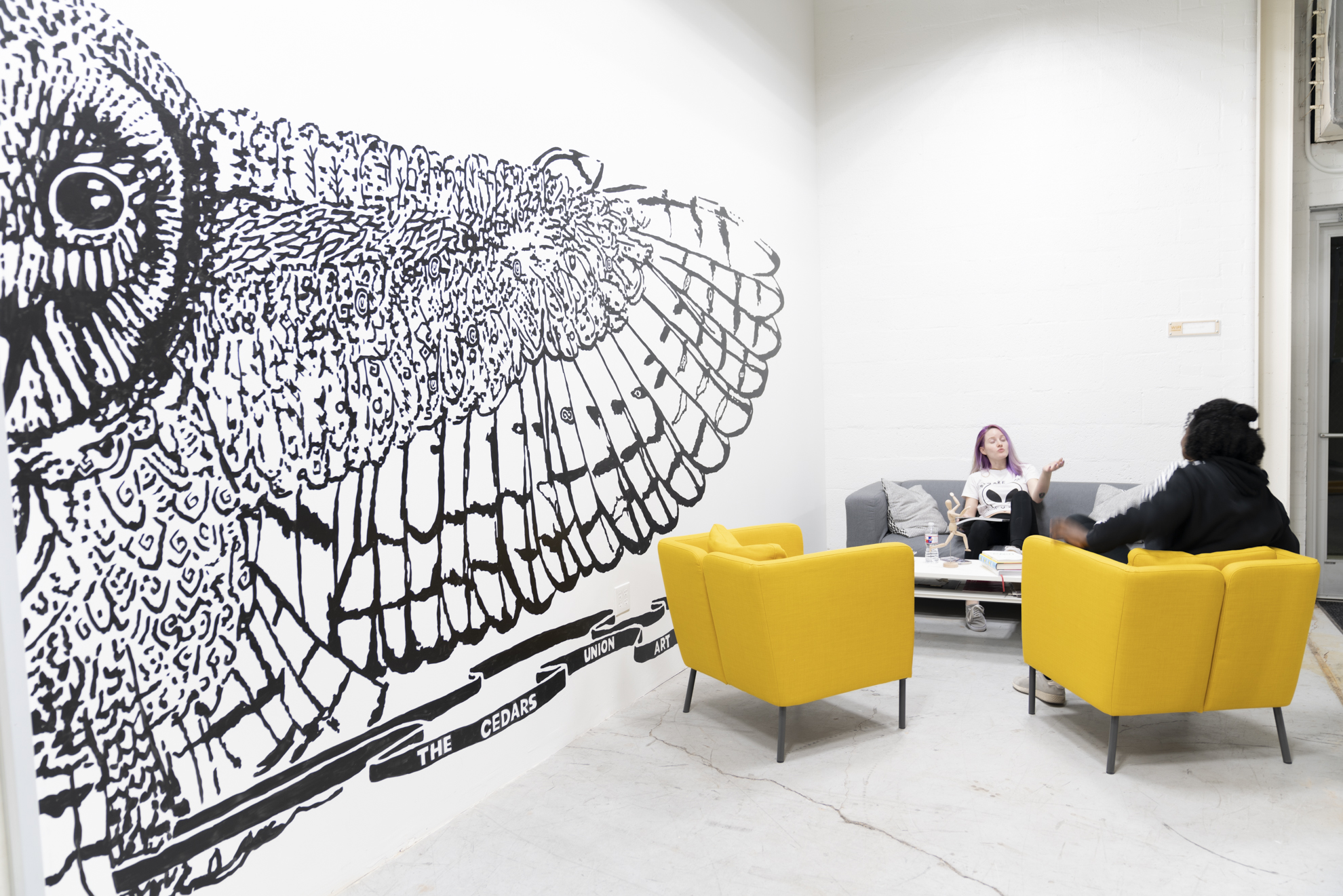 The space includes 15 mini artist studios, a woodshop (which recently suffered a burglary), a fabrication lab, computer labs equipped with software and a 3D printer, a wet lab, and a meeting hall. Studio artists, like Carmen Menza and Riley Holloway, apply and are chosen by an outside jury. There are also community members, who apply and pay a monthly fee to use the space without a dedicated studio. Collaborations are frequent and encouraged—for example, Hatziel Flores recently taught Jeremy Biggers oil painting.

“It’s been really exciting seeing the artists bouncing ideas off of each other and working and having critique among themselves and learning new stuff. That’s a huge part of how the design of the studios was done. My background is in industrial design, so the actual design of the building sort of enforces our ideals on the artists. We have low wall height, we don’t have doors, they sort of have to be in the community when they’re here,” says Bowdon.

Giving the artists tools to be entrepreneurs is also at the core of the Cedars Union mission. Bowdon says they want to end the concept of “starving artists” by teaching the artists how to negotiate contracts, price artwork, do taxes, “all the things that they don’t teach you in art school, but are fundamental in today’s marketplace.”

“The ultimate goal is to make the project self sustainable, but in order to do that we’re going to have to scale up,” adds operations director Rachel Stanfield.

For the Cedars Union, that means expanding its reach to include the community at large. The organization recently brought on a development manager, Betsy Lewis, and a marketing and programs manager, Adrienne Lichliter-Hines. They’re beginning to implement more paid public programming to make strides toward sustainability and community involvement.

In addition to its regular members-only programming, the Cedars Union has several public events and workshops planned this month.

If you’re an artist who’s not a member, you should consider attending a Lunch + Learn session, a free discussion and lunch in partnership with Arts Counsel Texas. The next one on August 14 covers the ins-and-outs about taxes and accounting.

On August 20, Cedars Union program manager Erica Felicella and Dallas Fire Marshall Keith Wilson will be talking about Permits and COs. That discussion is open to the public on a pay-what-you-can basis.

If you’re interested in experiencing the studio hands-on, there are workshops like Make Things with Clay on August 15. That class is $40 and includes supplies and instruction. Assignments and Beer, a more casual “class,” is on August 30 and is open to all experience levels for $20. (BYOB.)

You can find the full schedule of upcoming panels, workshops, and classes on The Cedars Union website.

The Cedars Union Was Robbed Over the Weekend