The Dallas Cowboys have had quite a tumultuous four weeks since returning from their bye. There was the Cooper Rush Game™ against the Vikings, the downer against the Broncos, then the destruction of the Falcons. Which version of the Cowboys would we get in Week 11 against the Kansas City Chiefs?

If this were a happier Monday morning, I’d probably tell you the number to know is 19, the number of points allowed to Patrick Mahomes and the Chiefs offense, an impressive performance even if this year doesn’t look quite like the same old Mahomes. But that’s not the real story of this game. No, this week came down to the nine points scored by the Cowboys offense and, more important, why they mustered only nine points.

Let’s dig a bit deeper into the stats and discuss why the number to know for Week 11 is 8.9. That’s the number of expected points the Cowboys lost due to sacks on Sunday.

Expected points is a way of measuring the impact of specific plays based on contextual factors like down, distance, time remaining, and field position. It’s derived from historical NFL data, and the model used in this piece comes from The Athletic’s Ben Baldwin.

If we were to add up all the yards, downs, and time lost from sacks by Kansas City, it comes out to the equivalent of about nine points on the scoreboard. If nothing else changed but Dallas avoiding those sacks, they likely would have doubled their total points on the day.

The offensive line was a major problem Sunday. Prescott was sacked five times and was frequently under duress when he was on his feet. Sacks are drive killers. The loss of yardage and the loss of a down are frequently just too much to overcome in a series. Such was the case against the Chiefs, where four of Dallas’ five sacks came on third downs and directly ended drives. The lone early-down sack came on 2nd-and-2. It turned the subsequent third down into an obvious passing situation and led to … another sack.

The Cowboys were without Tyron Smith yet again, and the toll it’s taking is really starting to add up. The Chiefs didn’t need to bring the house to get pressure past a Cowboys offensive line featuring starting left tackle Terence Steele. They could do it with just four rushers quite often, as they proved early in the first quarter:

Frank Clark was able to run untouched right to Prescott, where he forced the turnover deep in Dallas territory. A free rusher without bringing a blitz is a less than ideal way to start a game. Interestingly, that sack was actually the fourth-fastest sack of the week, per the NFL’s Next Gen Stats. Only 2.82 seconds elapsed between the time of the snap and the time Clark hit the quarterback.

On the Cowboys’ fourth drive of the game, they appeared to be getting their groove back. They moved the ball to midfield and converted a big 3rd-and-9, as Prescott sat in the pocket and delivered a strike to Dalton Schultz. However, it turned out the reason he finally had a bit of time back there was because Terence Steele held his pass rusher. Steele, bless him, is simply not Tyron Smith. The ensuing 3rd-and-19 was actually converted thanks to a defensive holding penalty, but the drive stalled three plays later when the Chiefs again got hands on Prescott. This time, they actually brought the blitz they showed, and it was enough to force a bad throw and end the drive for Dallas.

On 3rd & 5, the #Chiefs blitz Dak Prescott and tip the pass, forcing an errant throw that falls incomplete. pic.twitter.com/kPv1fOrF28

There was some chatter prior to the game about whether Kansas City would blitz Prescott, one of the better quarterbacks under pressure in the NFL (just ignore Sunday, please). They did, in fact, decide to bring an extra pass rusher nearly as often as usual.

The Chiefs blitzed Dak Prescott 14 times, according to @NextGenStats. Dak had more TD passes vs the blitz (16) than any other QB in the #NFL this season — by a lot. He was 8-for-14 for 55 yds vs the blitz in KC.

Those 14 blitzes put them at about a 28 percent blitz rate, a touch lower than their season-long rate of 32 percent. That’s nowhere near the drop in blitz rate we’ve seen from some other teams when they play the Cowboys. The Broncos, for example, only sent the extra rusher on six dropbacks during their decisive win in Week 9.

Next Gen Stats can actually track how far away each pass rusher is from the quarterback at the time of a throw (or sack). The league-average is 4.52 yards between QB and pass rusher on any given throw. On Sunday, three different Chiefs were closer to Prescott than that 4.52 yards, with Melvin Ingram and Chandler Jones actually tracking below 4.0 yards of separation from the quarterback on the average pass. It’s tough to make good passes with that in your face.

The offensive line could not protect their quarterback this week, and it led to a rare touchdown-less game for the offense. Allowing five sacks is a serious issue that can’t become a regular occurrence, especially when the cost is nearly nine points on the scoreboard. And, just to add a bit more context to the kind of impact that represents and how rare it is to see a Cowboys team give that up, I’ll leave you with this one final stat: there have been only seven games in Prescott’s career when Dallas lost more expected points due to sacks than were lost yesterday: 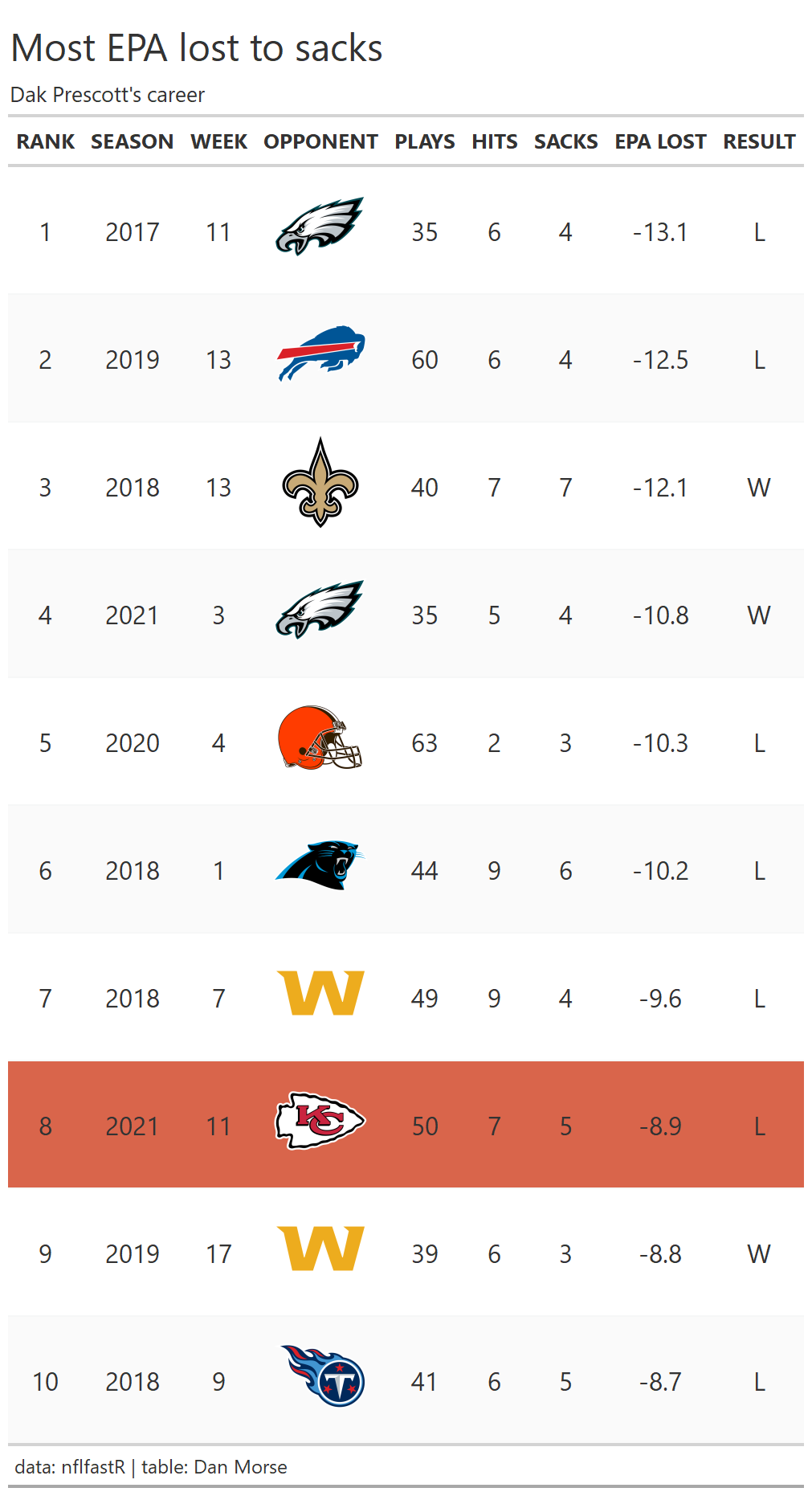 The Cowboys will need that to remain an outlier if they are to get back to playing like the team we saw through the first seven games this year.