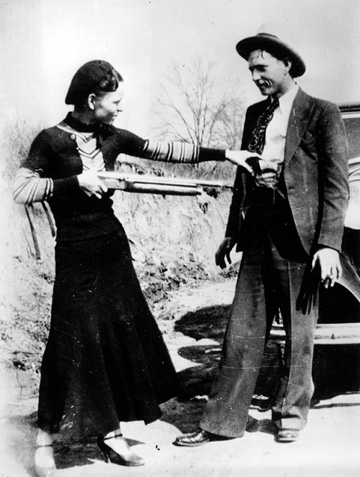 The first three weeks of clyde barrow’s and Bonnie Parker’s new lives as career criminals were notable mostly for bad decisions and worse luck. At times, their misadventures would have constituted slapstick comedy if lives hadn’t been at stake.

After dark on March 25, 1932, the trio of Clyde, Ralph Fults, and Raymond Hamilton set out to commit its first robbery. They didn’t have to go far. The Simms Oil Refinery was just a few blocks down Eagle Ford Road from the Barrow family garage in West Dallas. Clyde picked the fume-spewing target. He swore to his cohorts that a Simms employee had told him the company would have a large amount of payroll cash in its safe on the night of the 25th. It would be simple to sneak there under cover of darkness, cut through the chain-link fence surrounding the refinery, overpower a guard if one happened to be there, crack the safe, stuff their pockets with loot, and roar out of Dallas with their haul. Clyde anticipated a large take, perhaps as much as several thousand dollars.

As Clyde had promised his partners, cutting through the fence was easy. He hadn’t known that four employees were still going to be in the building, but they were quickly subdued and tied up. The refinery safe was located and its door cracked open with a hammer and chisel. But then Clyde’s foolproof plan imploded—the safe was empty.

The would-be thieves bolted. Clyde’s initial attempt to lead his newly formed criminal gang had been an abject failure, and Raymond Hamilton let him know it. Though he was still only 18, Hamilton had been supporting himself through petty crime for several years. He’d begun by stealing and reselling bicycles, then graduated to stealing cars. After the Simms fiasco, Hamilton wanted the gang to focus on automobile theft. The individual takes would be much smaller than they might be from robbing banks or businesses, he argued, but at least you didn’t have to wonder whether there was money in a safe.

From GO DOWN TOGETHER by Jeff Guinn.  Copyright © 2009 by 24 Words LLC.  Reprinted by permission of Simon & Schuster Inc.