Unfortunately for the would-be gun thieves, Kaufman employed a night watchman downtown. He noticed the two huge cars and the men in front of the hardware store. He approached them with his gun drawn, Clyde spotted him, and the two exchanged wild shots. Clyde told his family later that he deliberately fired high. Then the watchman ran for help as Clyde and Fults jumped back into their cars and sped out of town, with Clyde’s Chrysler ahead of Fults’ Buick. Behind them, a bell began ringing loudly—the watchman’s cries had been heard and someone was sounding the alarm.

The townspeople of Kaufman might have gone to bed early, but they awakened ready for action. In the few minutes it took Clyde and Fults to figure out an escape route to the main road back toward Dallas—there was no time to consult a road map now—the highway was blocked, probably with a pair of giant road graders. The fleeing criminals had no choice; they yanked their cars into U‑turns and drove back through town again, whizzing past a growing crowd of alarmed citizens and finally blundering east onto a narrow country road of packed dirt. There was no roadblock there. Clyde and Fults had cars that were undoubtedly much faster than any vehicles the country bumpkins they’d just left behind could use to pursue them. They hadn’t gotten the guns, but they’d clearly gotten away. And then it began to rain.

In spring 1932, almost all the back farm roads in Texas were still dirt, and Clyde and Fults were driving down one of them. It had been raining recently in and around Kaufman County, and as the Lake Dallas crooks tried to make their getaway a heavy new storm struck. The already saturated farm road quickly deteriorated into thick, goopy mud, and the weight of the massive Buick and Chrysler sank the tires of the cars so deep in the sludge that the vehicles stuck fast. Try as Clyde, Fults, and Bonnie might to get them up and out, they wouldn’t budge. The fugitives were drenched. The lighter, slower vehicles of their Kaufman pursuers would probably be able to skim over the worst of the mud. The trio had to abandon their immobilized cars and slog off on foot. They knew pursuit was coming. Everyone gathering in downtown Kaufman had seen the two cars racing away on the farm road. 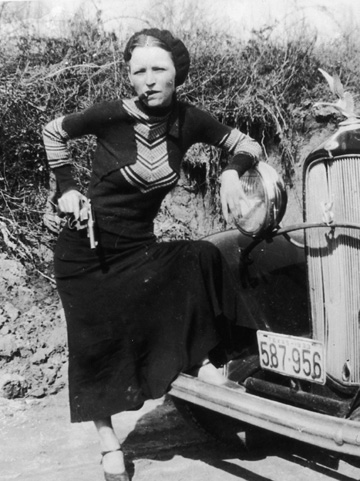 The rain hammered down hard in the pitch-black darkness as Clyde, Bonnie, and Fults stumbled through sodden pastureland. When they came upon a farmhouse at about 1 am they pounded on the door to wake up whoever was inside. The bleary-eyed farmer who emerged had no car for them to steal, but he offered the use of his two mules. There wasn’t much choice. Clyde and Bonnie clambered up on one mule, and Fults got on another, though not before it pitched him into the mud. The town of Kemp was a few miles away, and they guided their balky mounts in that general direction. Bonnie’s splendid adventure had degenerated into complete misery. She was soaked to the skin, petrified at the prospect of imminent capture, and perched on the uncomfortable, bony spine of a mule. They had to ride bareback because the farmer had no saddles.