Enjoy unlimited access to all of our incredible journalism, in print and digital.
Subscribe Now
Advertisement
10 Most Beautiful Homes in Dallas

We judged the following finalists by their exteriors—but when it comes to homes, we think that’s ok.
By Sarah Bennett | July 1, 2019|12:38 pm

Subscribe
Advertisement
Scroll through for this year’s favorites of all different neighborhoods, styles, and eras. (We’ve even planned a driving tour for you. You’re welcome.)

All housing information is from dallascad.org. 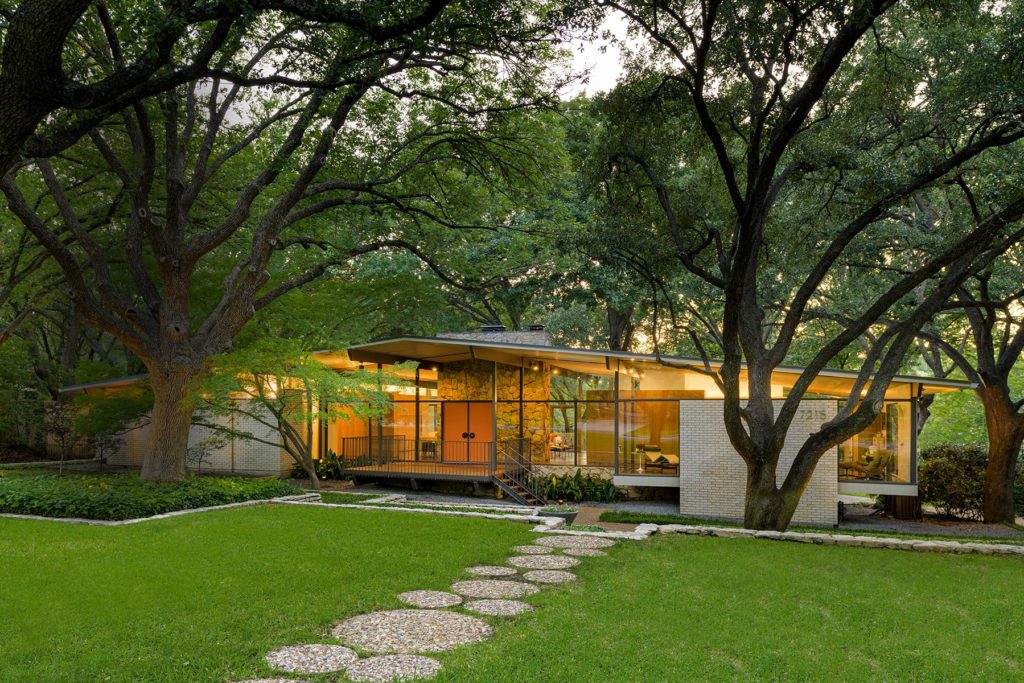 Why We Love It: In the words of the homeowner, this house “epitomizes midcentury modern.” When the owners bought it in 2004, it was in teardown condition—the previous owner had died a few years before. But the new residents took loving care to restore it to its full glory. “All we wanted to do was breathe life into it and resuscitate it,” says the homeowner. “The lines were so pure and quietly beautiful.” 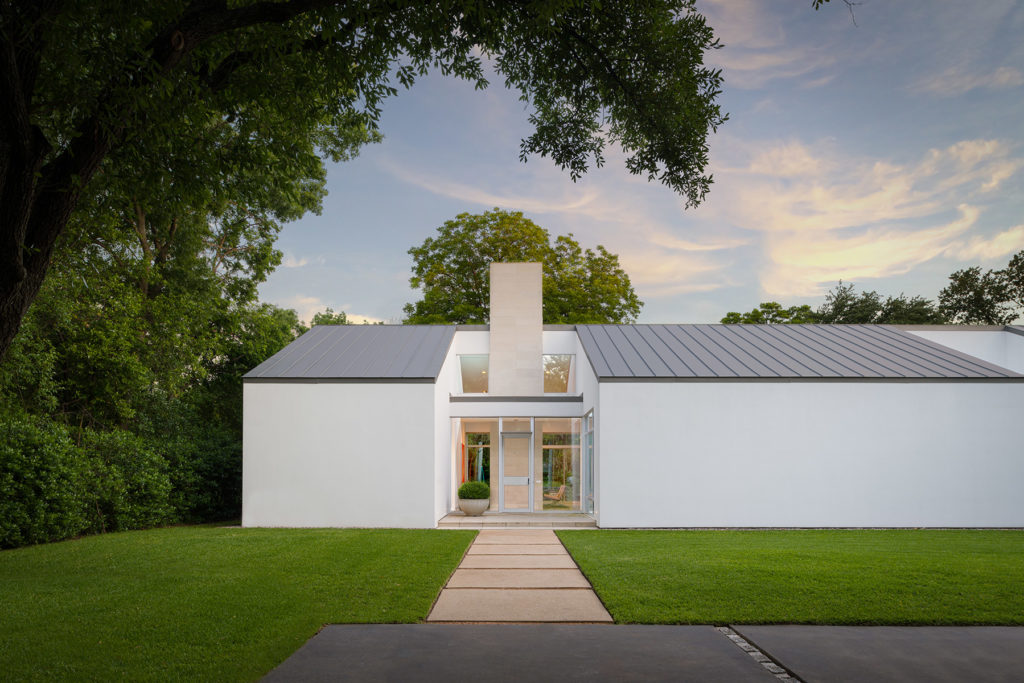 Why We Love It: Just looking at this house equates to serenity. “It’s kind of surprising: It doesn’t look like a 25-year-old home,” says the homeowner. Despite its perfectly pristine aesthetic, it lends itself well to being a family home for the residents. Before them, only couples with no kids or singles had lived there. Perhaps it also helps that last year, the family converted part of the 3-car garage into a room with a bath and a closet. “It was supposed to be a playroom but has turned into a multipurpose office/library with bookshelves and desks,” says the homeowner. “It was just such an interesting challenge.” The family wanted to be respectful of the original architecture, created by Lionel Morrison, when they made changes. “It’s in really pristine condition and really simply furnished and wasn’t a house that required too much in that regard,” she says. “[It’s got] clean lines, it’s bright and open, and has lots and lots of light. And amazing skylights. You can see clouds and sky from most rooms.” Sounds like a daydream to us. 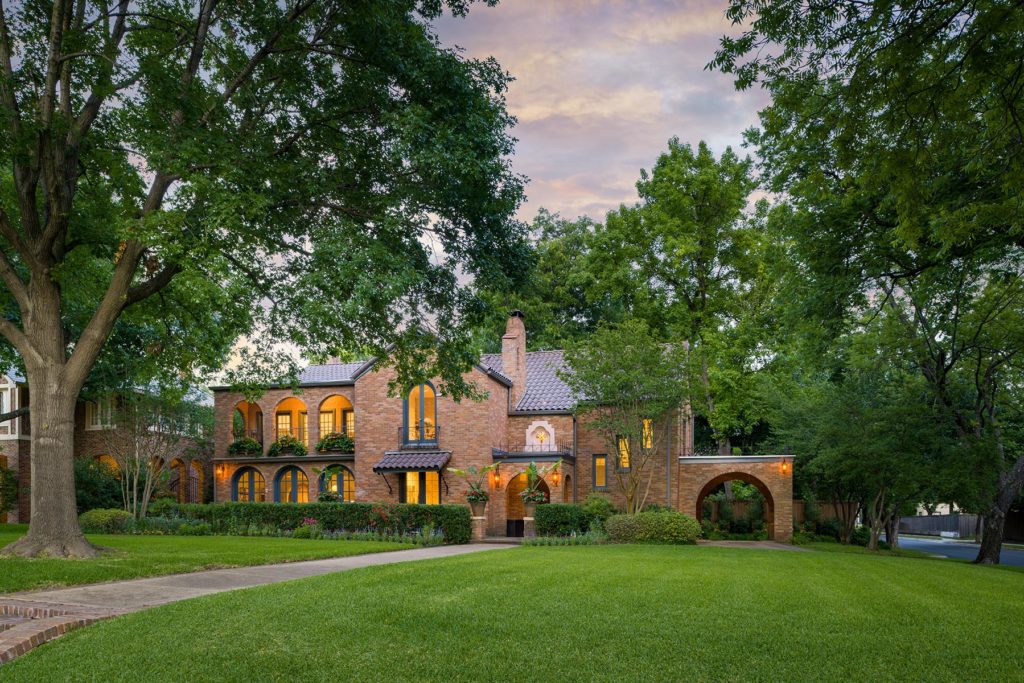 Why We Love It: This home is the perfect marriage of old and new—it’s got all the heritage and charm of its 1924 bones but with added space associated with modern living. That’s because in 1990 (prior to the current owners’ residency), the original carriage house was torn down and the bricks and tile were used to add a master suite and family room. “When it was built, it was the smallest house on the street,” says the homeowner.

Today, the addition blends seamlessly with the original exterior. You’d never know. But the homeowners are thankful for the additional space on the inside. “We have a house that has the history of being almost 100 years old but have an addition that looks historic but with a ‘real’ closet and bathroom,” he says. “In old homes, the bedrooms were smaller and the bathrooms are tiny.” A new carriage house was also built concurrent with the previous one’s teardown. The new build features brick that imitates the original. And today’s owners honor that spirit of history: “It’s a labor of love.” 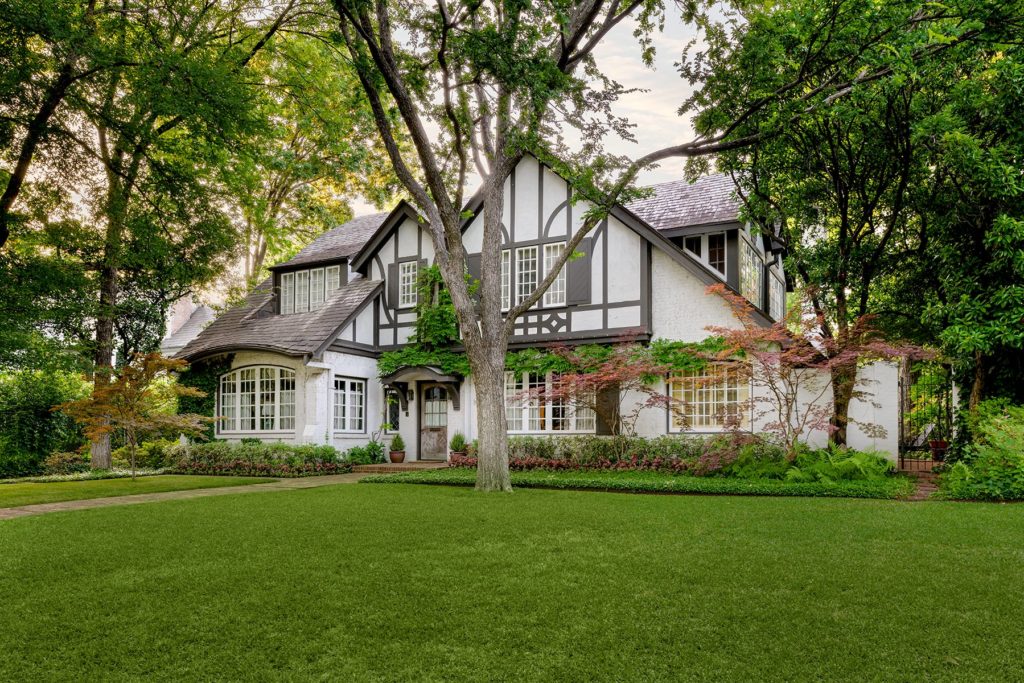 Why We Love It: The current owners have lived in this beautiful Tudor for 32 years. They love the tree-lined streets and the fact that the house was close to the nearby elementary school when their children were young. But over the years, they’ve made a few adjustments here and there to keep it working for their family. Twenty years ago, they tore down the garage and added on. Later, they remodeled the back of the house to add more bedrooms, a new den, and a kitchen.

But the charm and character has stayed the same. “It has wonderful doors with glass doorknobs,” says the homeowner. “My husband’s favorite parts are the sitting rooms upstairs and down. The one downstairs has wonderful glass doors.” It’s the pefect place to watch their grandchildren play when they come visit. 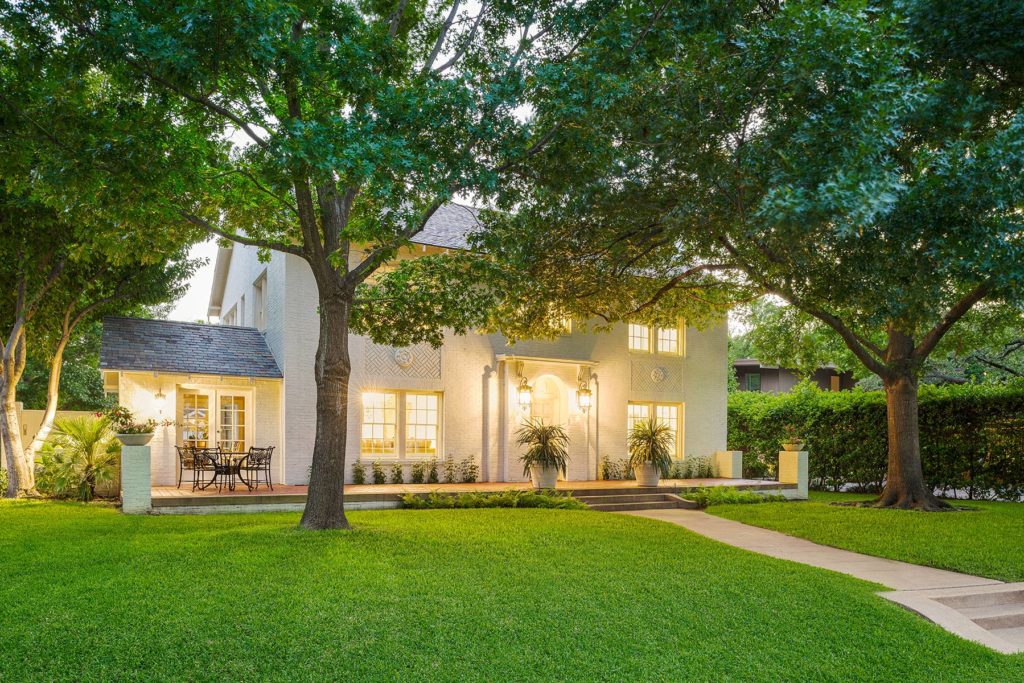 Why We Love It: This white-painted Spanish Colonial is a head-turner, for sure. The homeowner certainly thinks so, too. “When I found out the architects were [Marion] Fooshee and [James] Cheek, I was like, ‘Done. This is happening,’ ” she says. We would’ve felt the same: The renowned late architects were the brains behind Highland Park Village, as well as many homes across Dallas. But to the owner, it hearkens back to another region. “I grew up in South Texas, and it reminds me of what I grew up with,” she says.

In addition to that inkling of home, the interior designer and business owner loves the huge trees, long porch, large lot, and the spacious rooms. “When I bought it, it was not in the best state,” she says of adding many coats of paint, inside and out. “But I’ve made no structural changes inside.” That’s what we call true inner beauty. 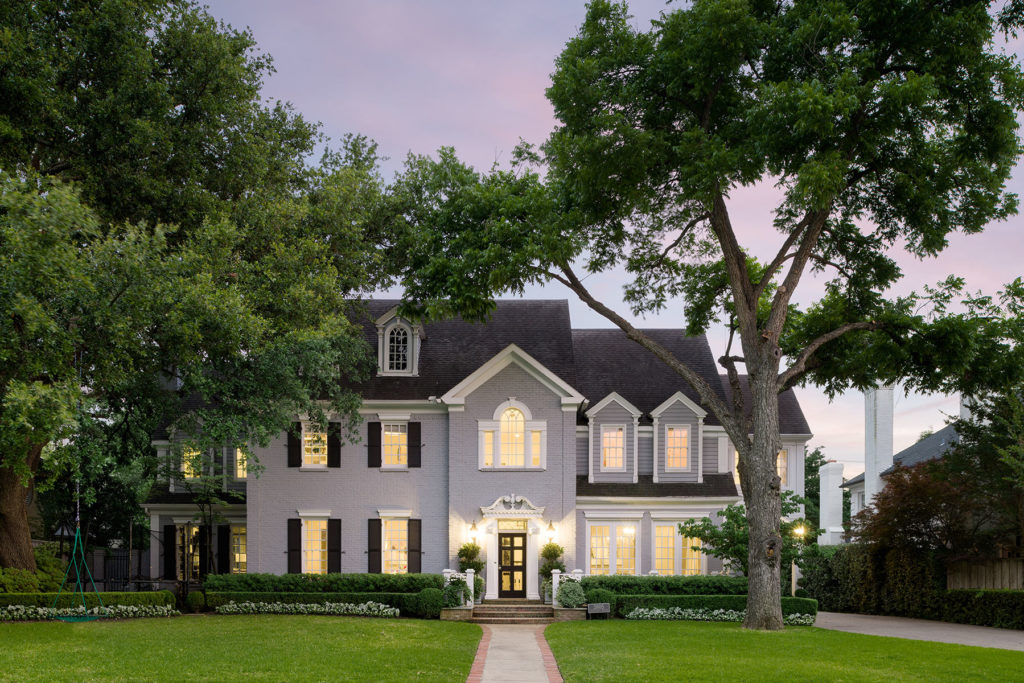 Why We Love It: The exterior of this house is the epitome of Colonial charm, with its black shutters, scrolled pediment, and pineapple keystone, and Ionic pilasters. Even the gray exterior paint color itself adds to the mystique. “At different times of the day, it looks different colors.” The family has lived there since 2006, when they were looking for a large lot with no pool (though they have since added one). “I had always noticed this beautiful, kind of Father of the Bride–looking house,” she says. The home has since proven to be the perfect place for their young children to grow up. We’re sure George Banks would approve. 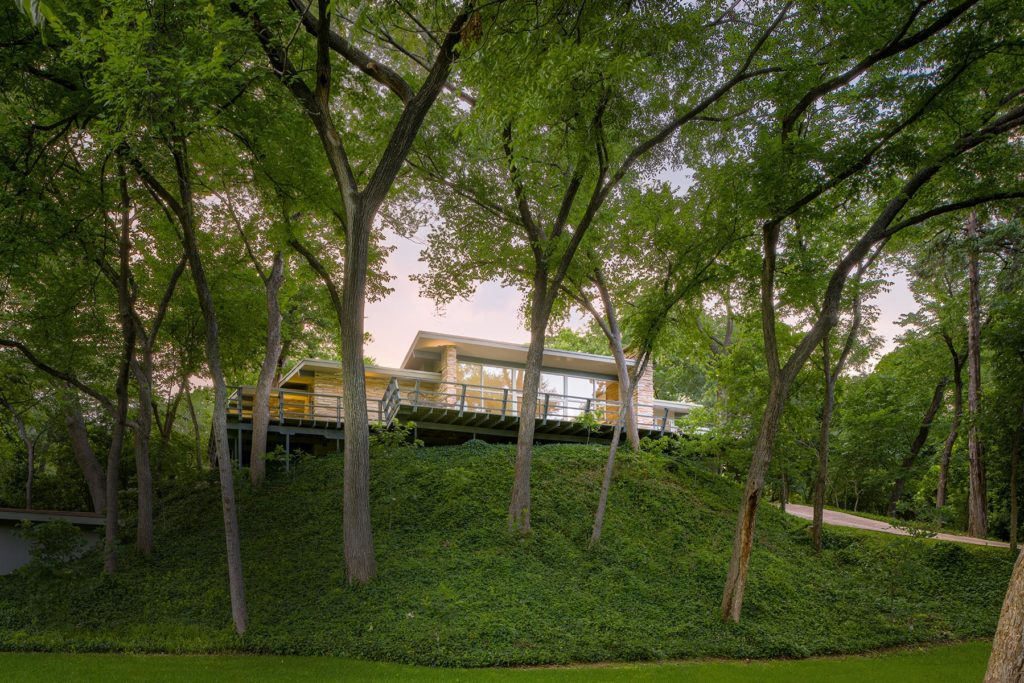 Why We Love It: You can’t help but fall in love with the way this house is tucked back within the hills and trees of Kessler Park—and the homeowners, unsurprisingly, feel the same. “It’s got sort of this treehouse feel,” says the homeowner. “It’s a gorgeous midcentury modern, and the Coombs Creek Trail is right behind us. You can’t see another house from the inside, [and yet] I can be downtown in five minutes.” She and her husband, a longtime East Kessler resident, eyed the property long before it was available: “It was the only house we would’ve left our previous home for.”

The couple knocked out one bedroom in order to extend the master suite and create a larger closet. With few updates since its original build, a number of renovations were needed, from plumbing and electric to the kitchen. It is truly the couple’s customized dream house. 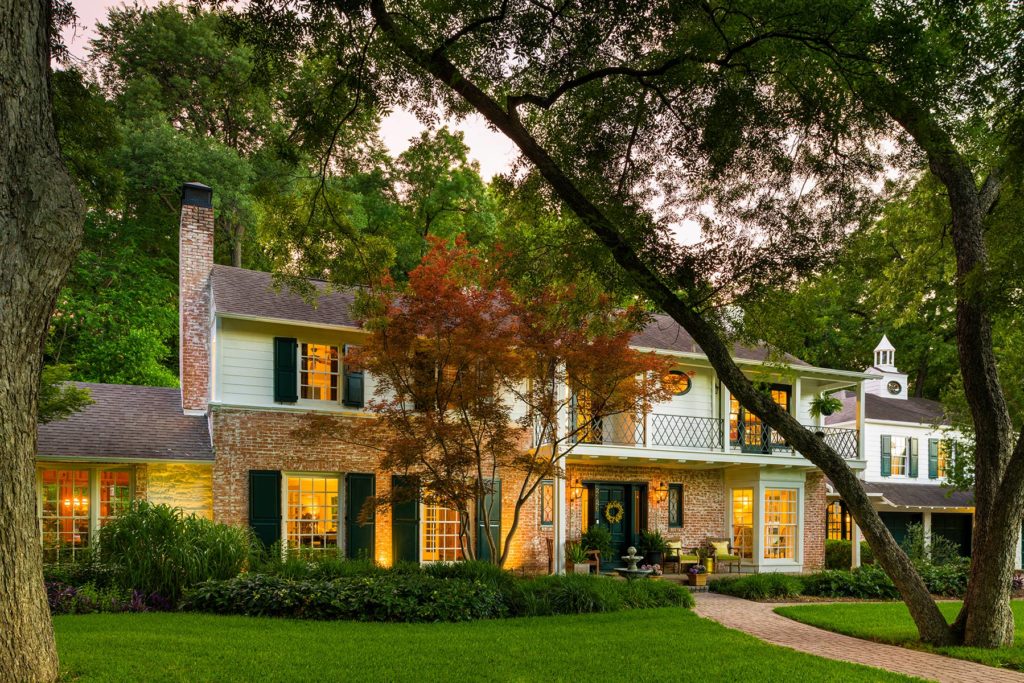 Why We Love It: Before moving in 11 years ago, the homeowners lived a few blocks away and chatted about someday living in their “dream home.” Now, that dream is a reality. Only the fifth owners, the immediate previous residents expanded in the 1990s and doubled the square footage. But the exterior is also a big plus. “We love the classic style,” says the homeowner. “It looks Southern, but also sort of Hamptons.” True to their love of Charleston, the couple chose designer Kara Legako to help choose the perfect shade of deep green for the shutters and door and add haint blue under the eaves.

The couple also loves the area: Their kids swim in the pool, ride their bikes down the street, or play tennis in the courts across the way. There’s also plenty of reason to preserve its beauty. “You feel a responsibility to it when you’re only the fifth owners ever.” 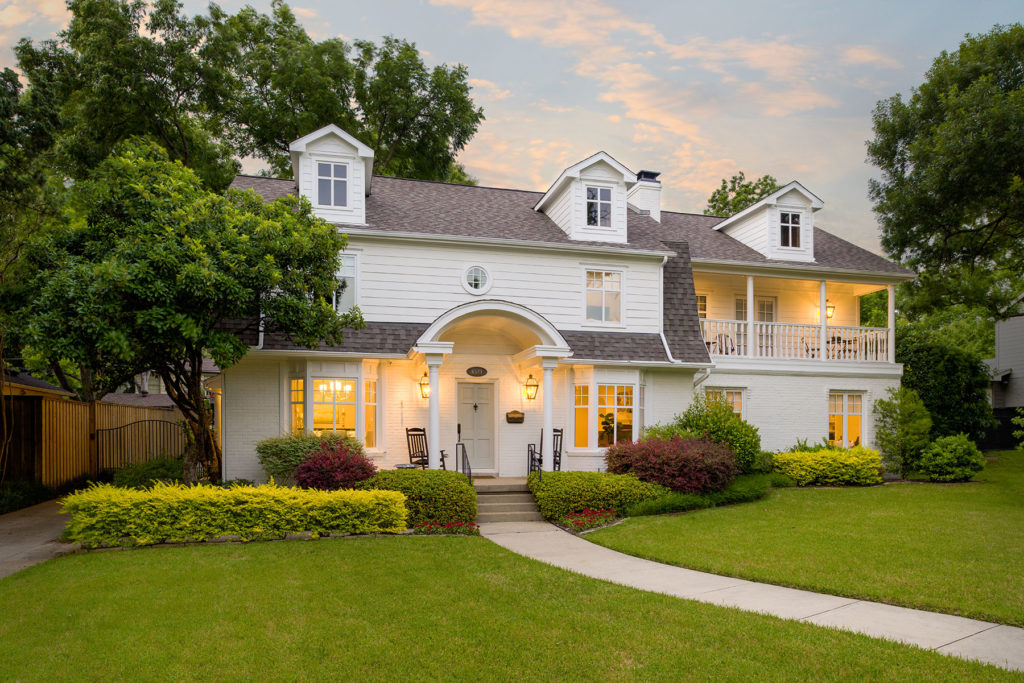 Why We Love It: Can you take your eyes off this beauty? We can’t. It’s at once traditional and yet striking, thanks to its Dutch Colonial play with shapes and lines. The arched entrance interacts nicely against the perfectly symmetrical windows. The homeowners, as you can imagine, are big fans, too: “We love the classic look and feel of the home; we love the white [exterior]; we love everything.” The family has lived in the space just over a year, but it’s already the perfect place for backyard summer entertaining with its pool. The family also loves the close proximity to White Rock Lake and nearby elementary school.

The sheer amount of space doesn’t hurt, either. “Everyone has plenty of room to do their own thing,” says the homeowner. “We love that it’s been updated and it’s open, so everything flows nicely.”

Why We Love It: The second Fooshee and Cheek home on this year’s list, we love this house for its historic significance and graceful beauty. And we’re not alone in that opinion: It was designated as a historic home by the Park Cities Historic and Preservation Society in 2010. It was also mentioned in Virginia McAlester’s Great American Suburbs book. Did we mention that the interiors were done by London’s Woodstock Design, headed up by Lady Henrietta Spencer-Churchill?

There’s obviously lots to love about this place—something the homeowner, who is only the second resident of the house, is proud to share. “There is a lot of original detail in the home,” he says. “The handcarved mantel overhead, the door surrounds, the moulding—much of which I thought was plaster, but it’s all handcarved wood.” (According to lore, the carvers were from Spain and lived in the back house during completion of the project.)

16 Colorful Finds to Liven Up Your Space

The sculptural pieces will light up your life in an artful way.
By D Home
D Magazine Directories