Caleb Smith didn’t think he’d last too long in Dallas. A New Jersey native who has traveled—and lived—all over the world, he came here in 1998 to oversee renovation of Bryan Tower, a 40-story downtown office building his father had just acquired. The then-29-year-old says he wasn’t sure what would kill him first, the Dallas heat—or boredom.

“I didn’t know anyone who went to UT or A&M, which put me at a huge disadvantage,” Smith says. “Socially, I’m very shy. If I’m talking about business, I’ve got no problems. But put me at a party that’s not about business, and I’ll be the guy in the corner chain-drinking and looking at my watch to see when I can leave.”

Smith was befriended by John Sughrue, who had come to Dallas from New York and who’s now one of the developers behind Museum Tower. “He told me, ‘It will take you 10 years to become a Dallasite. But when you do, you won’t want to leave.’ ”

Turns out, Sughrue was right. Smith and his company, Spire Realty Group, are now firmly planted in Dallas. But the real estate investor wants to do more than just live here; he wants to be a driving force in shaping the city’s future.

“I’m hoping to be the Trammell Crow of the 21st century,” Smith says.

A lofty goal, and one that seems almost blasphemous coming from an East Coaster. But Smith is putting his money where his mouth is. Since taking the helm of Spire, he has grown its portfolio to 3.5 million square feet of office space in Dallas, Austin, and Houston, plus 21 acres of urban land that’s ripe for development. The real jewel: a 12-acre tract that connects the Arts District with a downtown DART rail station, on which Smith plans to build a massive mixed-use neighborhood called “The Spire.”

“I don’t know of any other 12-acre plot of land in the central business district of a major city, certainly not in Texas,” Smith says. “It has created a unique opportunity, and that is not lost on us.”

“If you look at Dallas on paper, you’d say only an idiot would build office now,” Smith says. “But I live here. I’ve been to every floor of every [downtown] building. They’re all at least 30 years old. Look at everything that has changed since then: the Internet, electrical systems, HVAC systems—not one of those office buildings was built for today’s efficiencies.”

Most Dallas office towers are owned by outside investors. Smith is one of the few who is local—and that’s an advantage, he says. “Our strength is having an intimate knowledge of the markets we’re in,” he says. “That’s why Trammell Crow was so successful. He was here and he knew what was going on.”

Family Business
Smith’s parents met while they were students at Cornell University. His mother, Kathryn, went on to earn a Ph.D. in political science. His father, Randy, got a job with Bear Stearns, where he launched its bankruptcy and and distressed-debt division. In the late 1960s, the couple used their quick wits to win furniture and $20,000 in cash on the television game show Dream House. The money became the initial capital for an investment company Smith’s father launched from home, while still working at Bear Stearns. The whole family chipped in to help. By the time Caleb was 8 years old, he was making trades on a Quotron computer.

“I once had to train a 40-year-old how to do it,” Smith says. “The keys on the keyboard were in alphabetical order, which, as a kid, I thought was greatness.”

The returns rolled in. (Smith’s father, billionaire Randy Smith, is now known as one of the world’s leading distressed-asset investors; his Alden Global Capital generated a 187 percent return in 2009.) But Caleb says the family’s growing net worth didn’t change things much at home. He continued to work for his father through high school, then got a job at a restaurant washing dishes and peeling calamari.

When Smith went off to Macalester, a private liberal arts university in St. Paul, Minn., his parents told him to take anything but business classes. “You’ll be in business all your life,” they told him. “Don’t study it for the next four years.” He ended up with a double major in early childhood development and sociology and a double minor in art history and religion. He also composed music and sang and played guitar in a rock band and a blues band.

Things changed after his junior year at Macalester. Smith’s mother died of ovarian cancer, and he moved home to help take care of his younger sister. After working as a securities analyst for three years, he took some time off to think about whether he really wanted to work on Wall Street.

Smith spent about three months in India, China, and Japan, then went to Russia for another three months to study the markets. He returned home, finished up his degree in New York, then got a job as a bartender, with an eye toward opening his own restaurant. After a year, he realized he missed investments and took on some consulting projects for his father and other clients, working primarily in Russia and Eastern Europe. 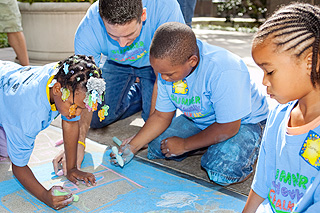 Spire Realty Group’s Children and the Arts Foundation hosts an annual sidewalk-chalk art event and other activities to inspire young Dallas artists. photography courtesy of Spire Realty Group
During all of this time, as his firm continued to grow and as he took on global investments, Randy Smith had tapped two of his brothers to join him at his company, knowing he could trust them to look out for the family’s interests. (Another brother, Russ Smith, is a well-known East Coast newspaper publisher who’s also a regular contributor to the Wall Street Journal’s editorial page.) But by the late 1990s, having run out of brothers, it was time for Randy Smith to look to the next generation. He called up his son and asked him if he’d oversee renovation of Bryan Tower in Dallas.

“I still had hair down to my ass,” Smith says.

Value Investors
The long hair is gone now, but Smith still doesn’t look the part of a Dallas commercial real estate magnate. He favors jeans and polo shirts—socks optional. In meetings, he likes to knock back cans of diet orange Sunkist and fiddle with a stress ball. He speaks in a gravelly voice.

Smith says his company is nontraditional, too.

It’s one that bucks the trends, expanding in bad times and contracting in good times. It’s not contrarian investing, Smith says; it’s value investing. Given their decades of experience working with bankruptcy and distressed assets, Smith says he and his father like to determine a building’s “fire sale” value before deciding to buy.

At Bryan Tower, Smith finally found his true calling: commercial real estate. He was given responsibility for Dallas in mid-1999. He wanted to take over the company, but his philosophy about how to run it clashed with his father’s. Smith favored a long-term-ownership approach; his father, being a lifelong trader, wanted to buy, improve, sell. After some debate, the elder Smith gave his son the reins in 2003 and the go-ahead to operate Spire as he saw fit.

Smith looked to Dallas native Jon Ruff, whom he hired in 2000, to help him transform the company.

“Caleb will tell you that it’s his job to come up with ideas; it’s my job to implement them,” says the 35-year-old Ruff, who serves as senior vice president.

Rather than looking solely at occupancy, Ruff says Spire’s strategy is to fundamentally improve each asset’s value, taking it from a Class B to a Class A, for example. “By doing so we provide a better service to our tenants, while at the same time, through standard valuation methodologies, exponentially increase the value of the properties,” he says.

Along with acquiring office buildings, including 500 E. John Carpenter Freeway in Irving, Smith began quietly buying parking lots along “San Jack” as an amenity for tenants at Bryan Tower. To control pricing, he bought all lots on both the north and south sides of the street.

Ruff filled him in on the history of the Arts District, which was being expanded nearby, and encouraged him to keep adding parking lots and land. Smith ultimately assembled six contiguous blocks between Ross Avenue and Federal Street.

“The Arts District was always intended to be a neighborhood, with office, retail, and residential,” Ruff says. “But over time, as it got developed, it instead became a grouping of venues. With The Spire, we now have an opportunity to provide that neighborhood.”

Although they’re actively marketing The Spire to prospective office tenants, the developers are under no pressure to break ground, as the parking lots are already producing income. The duo aims to create a project that will “transform” downtown Dallas, and they refuse to compromise their vision.

“We have the benefit of not playing with other people’s money,” Ruff says. “We don’t have anyone to answer to.”

With word getting out about The Spire, Ruff says people in the real estate community are shocked to learn how much land Smith has assembled. Along with investing in Dallas properties, Ruff and Smith have both become actively involved in the community. Ruff serves on the executive committee of DowntownDallas Inc. and on the city’s TIF board. Smith runs Spire’s Children and the Arts Foundation.

He says he’s determined that Spire—both the development and the company—will be a lasting legacy that his daughters will take over some day. (He and his wife, physician Jane Lee, have twin 2-year-olds, Savanna and Lillian.)

They’re already getting a taste of the family business. Half of Smith’s expansive office is a big playroom for the girls, who spend Thursday afternoons with their dad at Bryan Tower.

As a child, Smith says he once asked his father why he worked: “He said, ‘It’s a game and I love it. It’s competition.’ I said, ‘How do you know who wins?’ He told me it was whoever dies with the most money. I thought to myself, ‘That’s foolish. Why is he working when he could be playing?’