The data was compiled by Dexur, which provides applications and data to healthcare organizations to improve outcomes. Dexur’s database looked at 61 facilities in the DFW area for the calendar year 2019, all of which had done more than 11 hip or knee replacement surgeries without complications, which are the same hospital code. The data used Medicare claims data to calculate the amount of Medicare spending per beneficiary cost for hospitals in the areas and ranked them based on price.

The data reveals that most of the price discrepancy is not from the surgery itself but the follow-up required after surgery.

The majority of the hospitals have surgeries that cost between $11,000 and $15,000, but there are large discrepancies in post-surgery care costs. For the best-priced hospitals, the post-discharge cost was between $3,000 and $5,000. These extra costs are due to re-hospitalization, skilled nursing, or home health following the surgery. The range of post-discharge costs is the difference-maker for the hospitals, ranging as high as $25,000.

The post-discharge costs could be an indicator of surgery quality because a better surgery will mean a quicker and more inexpensive recovery. But there could be other factors such as medication and rehab adherence or other social determinants of health such as transportation, income, and education that might make a recovery more difficult but don’t reflect the quality of care.

Major health systems such as Texas Health Resources, Baylor Scott & White, Methodist Health System, and Medical City Healthcare all have hospitals ranked high in terms of cost and others that are some of the most expensive. However, Texas Health has three of the top four hospitals in terms of cost. There are rural, urban, and suburban hospitals throughout the list. The only clear conclusion is that the safety net hospitals are some of the most expensive for Medicare to pay for hip and knee replacements. JPS in Fort Worth and Parkland in Dallas have the two most costly surgeries and two of the three most expensive hip or knee surgery costs in the region. See some of the highest and lowest cost hospitals below. 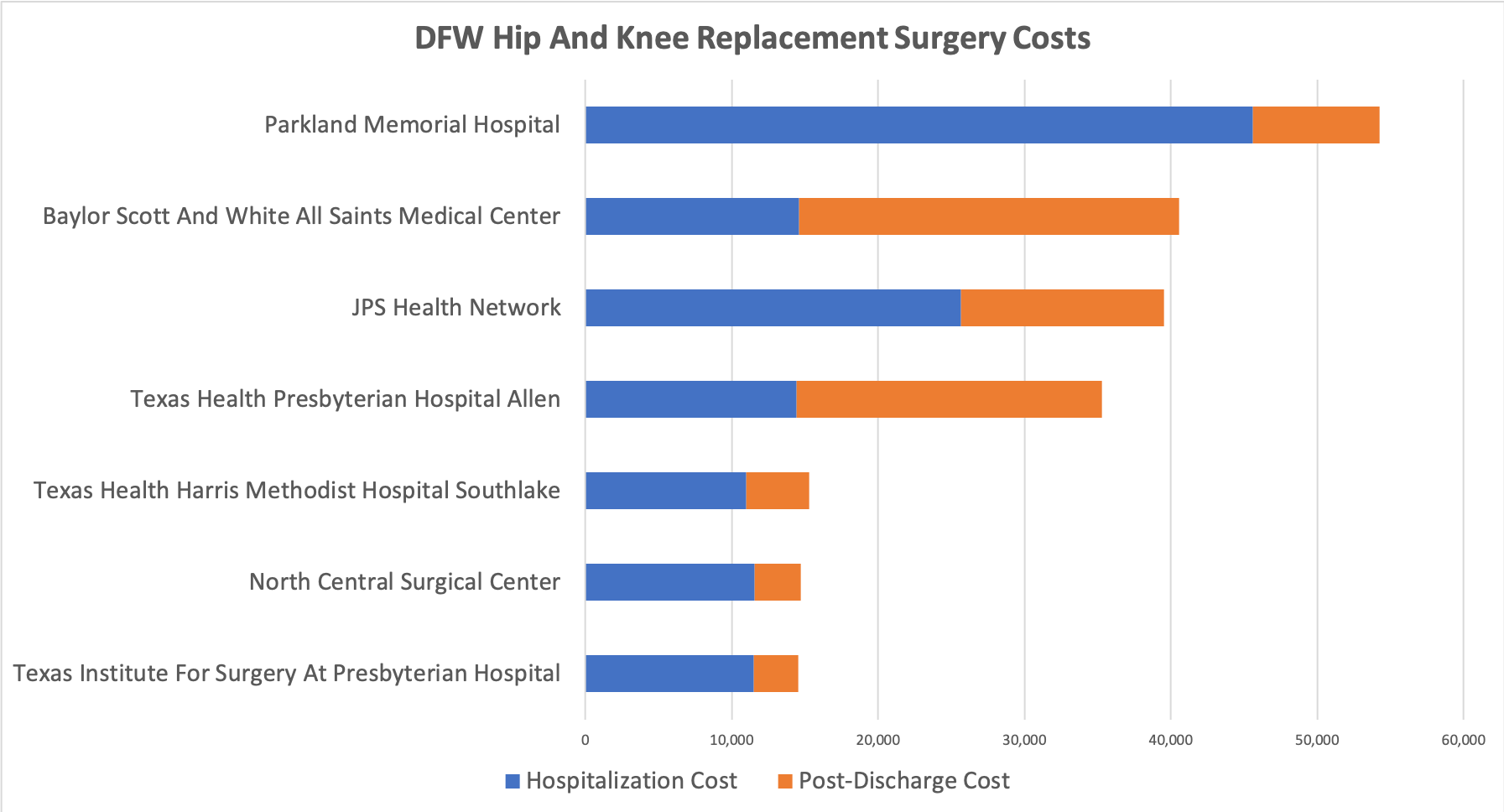 The other pattern has to do with surgery frequency. The six hospitals that are the most expensive all performed less than 30 surgeries in 2019, while most of the efficient hospitals performed more than 150 surgeries. Like most activities, the frequency of performing a task improves quality and efficiency.

Because Medicare is picking up the tab for most of these costs, patients have little incentive to choose a more affordable facility. Still, because the price variation is closely connected to post-discharge expenses, a more affordable hospital usually means that the patient has recovered quickly and didn’t end up back in the hospital.