Because COVID-19 has a longer incubation period than regular flu, it spreads most easily before symptoms occur, and has a large percentage of asymptomatic carriers. That makes it almost impossible to arrest the spread. People may be infected without knowing it, and may be spreading it at their greatest rate before they even have symptoms, according to the study. Based on other pandemics, CIDRAP thinks this pandemic will last 18 to 24 months and won’t be halted until 60 percent to 70 percent of the population is immune.

UT Southwestern’s report models the spread of the virus across North Texas, based on patient data. First, the report notes that Dallas acting when it did prevented tens of thousands of cases, with a two-week delay resulting in 6,100 total cases in North Texas rather than the anticipated 93,000. It notes the uptick in social movement over the past two weeks, as well as total hospitalizations has hovered between 250 and 350 since early April.

But the most startling prediction is that if current social distancing measures are continued, DFW may see 800 new cases a day by early July, rather than the 250 it is experiencing now. Current measures are 60 percent effective in containing the spread, which will result in 800 cases a day according to UTSW’s projections. But if prevention measures were bumped up to just 65 percent, cases would be begin slowly decreasing for the rest of the year. If the measures become 69 percent effective, cases are more quickly reduced to almost zero. 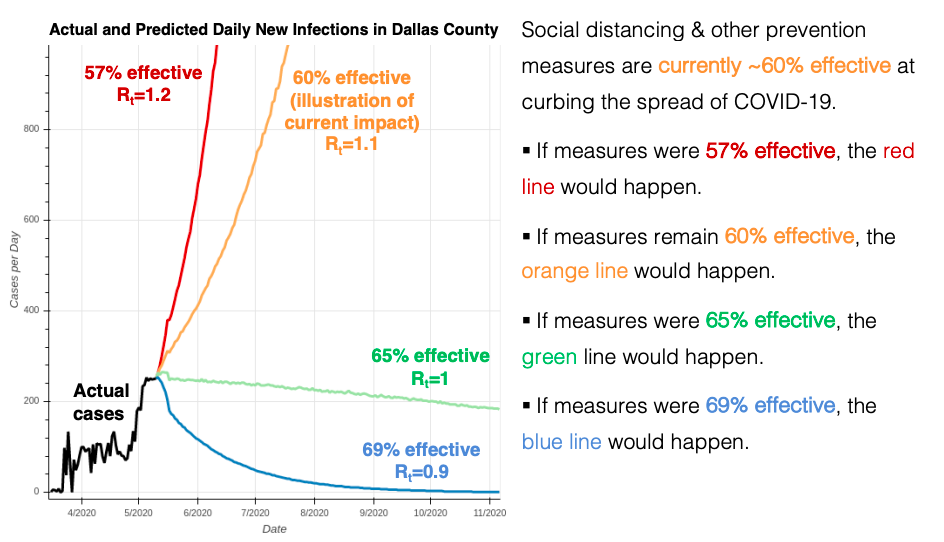 The CIDRAP study presents three possible scenarios. The most likely is (scenario 2, below) when the current wave of the disease is followed by a larger spike in the fall or winter and smaller waves through 2021. Mitigation measures like masks, staying home from work and the closure of public places will be required to slow the spread and keep the healthcare system from being overwhelmed. This is similar to what happened during the 1918-1919 pandemic, when a small wave hit during March of 1918 to be followed by a larger spike in cases that fall. 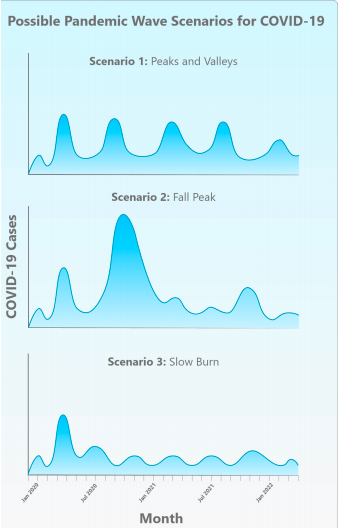 Another scenario (1, left) says the current wave of COVID-19 will be followed by a several smaller waves for the next two years or so, gradually diminishing in 2021. During that time, restrictions on where people can go and what is opened may begin and end as waves increase and decrease. The last scenario is what is called a slow burn without a clear wave pattern.

Geography and transportation are likely to play a role. North Texas is more spread out and less reliant on public transportation than other hot spots, so the waves might not be as pronounced here. The first wave wasn’t nearly as high as predicted, and this prediction may be similarly overblown. That said, Texas reported 1,148 new cases and 58 deaths on Thursday, both were record numbers as testing has increased.

“I don’t know what it is going to do,” says DFW Hospital Council CEO Steve Love. “To model and predict two weeks out is the best you can do. Looking at testing, hospital occupancy, the mobility of the population, modeling will be difficult.”

The study recommends that health authorities plan for the scenario with the larger second wave, with all government and healthcare organizations making plans to enact mitigation efforts, and protect healthcare workers. “This pandemic will not be over soon and people need to be prepared for possible periodic resurgences of disease over the next two years,” it reads.

Here in North Texas, the situation is being monitored closely by healthcare facilities. “Hospitals are looking at admissions, how many are in the ICU, and how many of those require ventilators,” Love says. “I am cautious but optimistic.”

Steve Love: Maternal Mortality in Texas is a Crisis Situation