Southern Dallas is squarely in the crosshairs of COVID-19 related hospitalization, according to researchers at the University of Texas Health Science Center at Houston. They have mapped the areas where residents are more likely to end up in the hospital due to COVID-19 in major Texas cities, and the Dallas map is a familiar image.

Looking at nearly any measure of health, education, or wealth, Dallas will exhibit stark lines north and south of I-30, and this map is no different. We know that living a few miles away in a different ZIP code can literally add decades to one’s life in Dallas, and because COVID-19 deaths are overwhelmingly connected to those with comorbidities, the UT map highlights where health problems already existed in the city because of everything from food deserts to access to healthcare, transportation, and good paying jobs.

Dallas is lacking in testing numbers and accurate data about the demographics of those who have tested positive, hampering the ability of the health department to respond. The current maps of positive tests reflect a mixture of access to testing and social determinants of health, an odd combination of southern Dallas and Highland Park.

Other Stories on This Topic

Black and Latino residents are likely being undercounted for the coronavirus.

How Dallas County is responding without testing data.

But using data from the American Community Survey Five-Year Summary from the U.S. Census Bureau and the 500 Cities Project from the Centers for Disease Control and Prevention, researchers identified risk factors for hospitalization due to coronavirus. Those in the red areas are those who are most at-risk, which includes over 1.3 million residents, who have obesity rates and poverty rates of up to 50 percent, asthma and and COPD rates over 10 percent, and diabetes rates of almost 25 percent, according to the data.

The areas most at risk are south of I-30, east of I-35, and in West Dallas, where much of the city’s black population lives, echoing other evidence that describes how much worse the virus has impacted black communities. Heart disease, history of stroke, obesity, chronic obstructive pulmonary disease (COPD), asthma, diabetes, and kidney disease are all contributing factors for hospitalization and developing critical illness.

Those areas with high concentration of people over the age of 60 are also at risk (below), the researchers noted, which includes areas of South Dallas near Fair Park and southeast Dallas near I-20 and I-45. The data combined age with those who also have a comorbidity to designate places where age and health combine to make populations especially vulnerable. 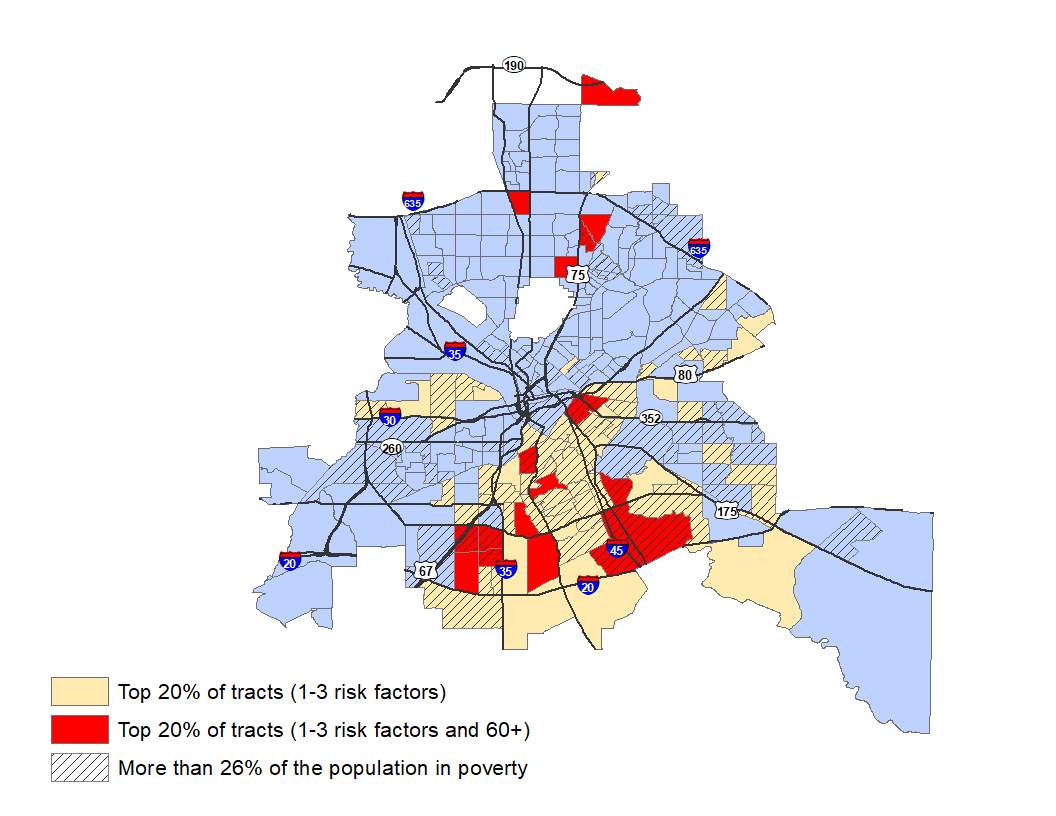 The map has also indicates which areas in Dallas have the highest concentration of poverty, which overlap with much of the at-risk areas. The report highlights ZIP codes to watch, which is an unfortunately familiar list that lines up with other lists naming the poorest and unhealthiest areas of Dallas. They are 75216, 75241, 75212, 75232, 75203, 75210, and 75215.

Time will tell whether social distancing can save more lives.

UTSW, UNTHSC, and Catalyst Team Up to Test First Responders