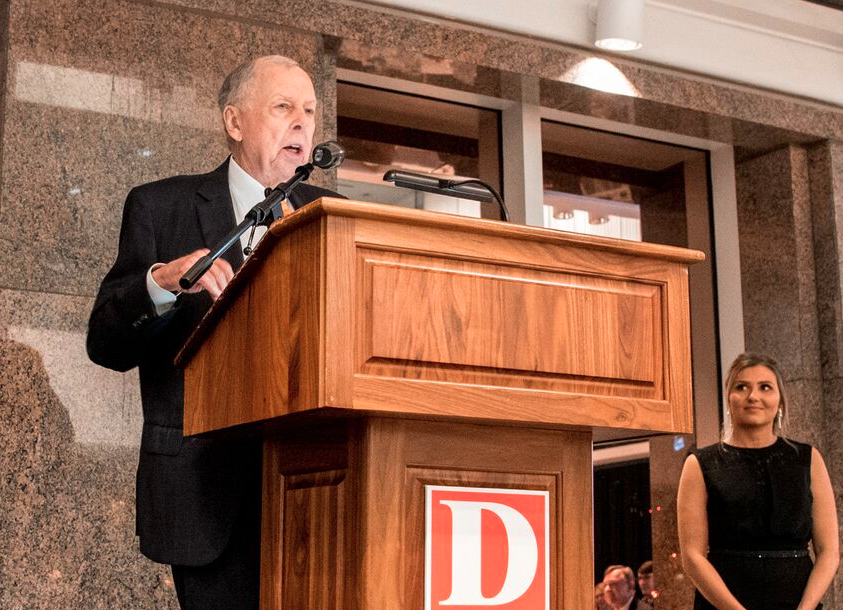 T. Boone Pickens’ passing last week rippled through nearly every community in North Texas, and the medical community joined in its mourning of one of the nation’s greatest philanthropists.

The old-school oil tycoon, known as the “Oracle of Oil,” was a larger than life character who risked a great deal to become one America’s greatest entrepreneurs. After a series of strokes in 2017 and a fall in 2018, he stopped most public appearances, but he still made it to D CEO‘s Oil and Gas Awards last October where he received the inaugural Lifetime Achievement Award.

Pickens was known as much for his wildcatting and oil field development as he was for his generosity. He gave substantial sums to Oklahoma State University, where he graduated in 1951 when it was known as Oklahoma A&M, as well as numerous medical and educational organizations. He gave $53 million University of Texas Southwestern Medical Center, where the biomedical building bears his name, as well as the Baylor Health Care System’s cancer center.

“Boone Pickens always found novel and inspiring ways to deal with challenges,” said Dr. Daniel K. Podolsky, President of UT Southwestern via release. “Throughout his career and life, Boone worked to ensure both immediate success and ongoing achievement for future generations. His creative solutions to life, business, and philanthropy inspired us all, and stand as an extraordinary testament to his visionary approach.”

“Boone had a sincere and deeply felt commitment to helping people through selected giving to institutions that he was confident could multiply his initial investment. We are grateful to have been among those institutions and look forward to fulfilling that commitment,” Dr. Podolsky said.

He was also very generous with the Center for Brain Health, where the Virtual Learning Center also bears his name for the $11.5 million he has given the center since 2006. Founder and chief director of the University of Texas at Dallas’ cognitive research institute Sandra Bond Chapman told The Dallas Morning News. “Boone told me, ‘This is one of the greatest investments I have ever made in terms of ROI to humanity and new discoveries,’ ” she said.

In 2006, he formed the T. Boone Pickens Foundation, which focuses on health and medical research, treatment and services, entrepreneurship, kids at risk, education, and athletics. He has given away more than $1 billion dollars throughout his career.