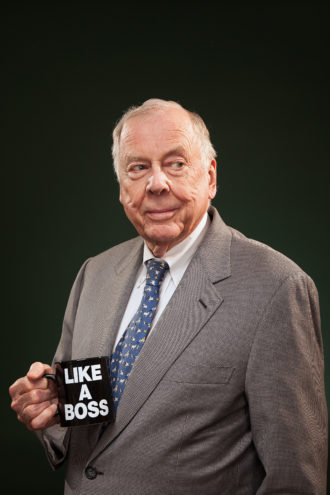 From 2013 CEO of the Year profile in D CEO Magazine.

It’s difficult to overstate the influence the legendary Pickens has had in his nearly six decades in the oil and gas industry, from his early days buying and drilling in the Permian Basin to building those efforts up into Mesa Petroleum, which he took public in 1964. He helped pioneer corporate raiding (“shareholder activist” is the term Pickens preferred) by buying stock in large energy companies, agitating for cost cuts, and then profiting when the firms sold. Decades later, in his 70s, he reinvented himself and founded the energy-focused fund BP Capital. And in February 2018, under the ticker BOON, BP Capital Fund Advisors introduced an index that tracks the oil and gas industry—shaped by decades of experience and energy thought leadership of Pickens and his team.

The larger-than-life Pickens was born in Holdenville, Oklahoma, in 1928. He attended high school in Amarillo and went to Texas A&M for a year before losing his basketball scholarship and transferring to Oklahoma A&M. He graduated from what is now Oklahoma State University in 1951, with a geology degree. An ardent OSU Cowboys fan, Pickens was known to wear his alma mater’s signature orange and fly his Gulfstream 550 jet to Stillwater for home football games.

An avid outdoorsman, his beloved 68,000-acre Mesa Vista Ranch in the Panhandle is currently on the market for $250 million. When Pickens dropped off of Forbes list of billionaires in 2013, he tweeted: “At $950 million, I’m doing fine. Funny, my $1 billion charitable giving exceeds my net worth.” In perhaps his best Twitter moment, though, Pickens trolled a “The first million is the hardest” tweet by Drake in 2012 with, “The first billion is a helluva lot harder.” 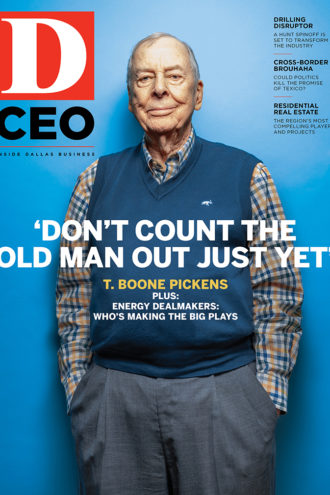 Pickens’ impact through his philanthropic efforts cannot be understated. The T. Boone Pickens Foundation, formed in 2006, donated more than $500 million to his alma mater, which named its football stadium after him. In Dallas, the YMCA, Presbyterian’s Hospice and Palliative Care Center, Texas Woman’s University’s Institute of Health Sciences, Baylor Health Care Center’s cancer center, a biomedical building at UT Southwestern, and a floor of the Perot Museum all carry Pickens’ namesake after major gifts.

Pickens was also a New York Times best-selling author of 1987 autobiography entitled, Boone. His second book, The First Billion is the Hardest, published in 2008, and contained several business tidbits, which came to be known as “Boone-isms,” like: “In a deal between friends, there’s no place for wolverines,” and “Chief executives who themselves own few shares of their companies have no more feeling for shareholders than they do for baboons in Africa.”

Pickens was a fervent advocate for reducing the United States’ dependency on foreign oil, pledging $100 million and launching the Pickens Plan in 2008. In his Dallas 500 Living Legends profile, he said: “I’m excited about the prospect of energy independence for North America. I don’t like OPEC.”

A series of strokes in late 2016 (which hospitalized him in what he called “a Texas-sized fall” in 2017) forced Pickens to retire in 2018. But that didn’t stop him from accepting the inaugural Lifetime Achievement Award at D CEO‘s Oil and Gas Awards last October.

He wrote on his blog about that evening:

A reporter once asked me if I considered myself a Texan or an Oklahoman. I said: “Both.” But at D CEO‘s 2018 Oil & Gas Dealmaker Awards, I was a Texan….

I’m honored to receive this lifetime achievement award because every major turning point in my life – and there have been many – has been impacted by or has strived to impact this great state….

It was a wonderful night of remembering how far Texas has come in these sectors, and how the future looks even brighter.

Can Coconut Oil Replace Your Beauty Routine? We Give It a Try. (Oil Pulling Included!)