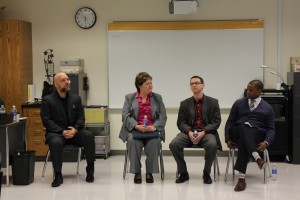 DISD Board trustee Mike Morath was featured in a Dallas Morning News Q&A over the weekend. You should read it. Morath also apparently feels the Q&A needs some clarification, which he has just issued via the miracle of e-mail. It does not mince words. Example: “Much like teachers, principals, and the superintendent, trustees should not be allowed to keep their jobs if they do not get results for kids.” [Bold typeface added by Morath, because BOLD, DAMNIT!]

As always, read with your eyes:

Home Rule and the Children of Dallas

Less than one third of Dallas students can properly read and write.  Clearly, major changes are necessary.

Given this need for change, last week, a group called Support Our Public Schools announced their intention to gather signatures to ask the Dallas ISD board of trustees to launch a commission to consider becoming a Home Rule school district.

This initiative has the potential of being a truly game changing reform of our system.  The law allows Home Rule school districts to do two things:  (1) seek exemptions from a variety of state mandates, and (2) adopt a new governance structure.

My interest in Home Rule stems from three years of experience serving on the board of trustees.  In the last two decades, a majority of trustees on the Dallas school board have consistently tried to make progress.  And some progress has been made.  But there is a fundamental problem with our system of governance.  I’ve come to the realization that there is no real accountability to children for board members.  Trustees are accountable to us, the voters.  But such a tiny number of us vote that is easy for adult special interests to triumph over the need to improve outcomes for children.

This isn’t right.  Much like teachers, principals, and the superintendent, trustees should not be allowed to keep their jobs if they do not get results for kids.

Home Rule will give the people of our city a chance to change this dynamic for the first time ever, by changing the structure of the school board.  This kind of change is different from individual policies enacted by a given superintendent, because it will change the incentives of those above the superintendent who are truly in charge.

Because of my role as trustee, I’ve had the unique opportunity to think about these issues for a long time.  And I have many ideas on possible structural improvements to our system.  These ideas and more deserve careful deliberation before we as a community decide on any one or combination of options.  The key is to recognize that we are not forced to accept the status quo.  Which is both liberating and frightening.  But the status quo is not acceptable for our children, so we should be both thoughtfully and courageously willing to engage in debate.  Given that, here are a few possible governance changes:

These are just a few ideas.  There are more.  They deserve to be discussed, debated, attacked, and/or supported as part of the democratic process of re-imagining what Dallas ISD could be.  I hope the citizens of our great city will participate in this great debate.  And I hope my fellow trustees will help lead that debate.

I think it is also important to clear up a few misconceptions related to this Home Rule discussion, given recent news stories on the topic.

Specifically, there have been a variety of questions about how the non-profit group Support Our Public Schools came about.  These questions are of course irrelevant to the broader issue of how we should better organize Dallas ISD to educate our children.  But they are good questions regardless.  To provide some clarity:  I do not serve on the board of Support Our Public Schools, and as a result, I have nothing to do with the decisions they make.  But I am an avid supporter of their organization.  I first learned about Home Rule over a year ago, and I brought the law to the attention of several of the eventual founders of Support Our Public Schools.  I even encouraged them to form the organization.  They decided it was a good idea, and did.  They’ve regularly updated me on their progress, and I’ve regularly tried to provide any help they requested.  For example, a couple months after they got started, I arranged for an introduction with the Mayor so they could brief him on the law and their organization.  Similarly, in February I introduced the organization to Hillcrest alumnus John Arnold & his wife Laura’s Action Now Initiative, and they decided to support the organization as well.  While Support Our Public Schools isn’t pushing any specific outcomes in this process, they are working hard to bring many different stakeholders together for a conversation on a very complex topic.

If we come together as a community and fully dedicate ourselves to meeting the needs of our children, I’m confident we can substantially improve the system that is Dallas ISD.