Jennie Kelley and Brandon Moore have, by now, mastered the pop-up. The culinary duo—and, yes, a couple—run Better Half Bistro, a pop-up that launched shortly after Kelley closed Frank’s Underground in August 2019 after a seven-year run.

Better Half Bistro will pop up at Cosmo’s in East Dallas this week.

This isn’t Kelley or Moore’s first kitchen takeover rodeo. Last year (pre-pandemic last year, mind you), Better Half did a 15-day run at Cosmo’s. It was such a successful stint that Cosmo’s co-owner Jackson Tran is having the pop-up come back, but only for four days this time: July 12–15.

“Sometimes you want something different in the neighborhood, but you still want to be at your favorite bar,” says Kelley. That’s what Better Half hopes to bring for a little while.

This time around, Kelley says, they’re making lighter, summery fare befitting 90-degree weather. (Sorry, no duck leg cassoulet.) Some dishes from the first Better Half pop-up will make a return: the two-hour sous vide carrot with a goat cheese mousse (it was a fan favorite, for sure); Le Sandweech, which consists of Parisian jambon, salami, gruyere, djionnaise, and more; plus a salmon belly tartare with cured egg yolks, pickled shallots, and capers. 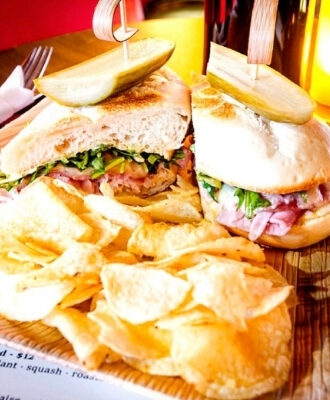 There will be share plates and entrees, even a dessert for the first time—a Fernet-Branca cold brew freezy pop. Check out the whole menu here.

“I like to pay homage to East Dallas when we do things. Last time we did The Grape’s cream of mushroom soup because they’d closed and I got permission from the chef,” says Kelley. “I put myself through college working at Terilli’s on Lower Greenville so I’m buying their Terilli’s Italcho Chips and that’s going to be this cool garnish on our stone fruit salad that is deceptively simple-sounding and epically killer texture and taste-wise.”

The pickled goods come courtesy of The Pickling Collective, a briny side hustle by Moore (Ocean Prime’s current executive chef). Aside from pickling, Moore started perfecting his sourdough during the pandemic and, being from Detroit, he also developed his own Detroit-style pizza for Better Half pop-ups. (Unintentionally, Moore basically predicted the top DIY pandemic projects of 2020 before they were cool.)

For all COVID did to upend lives, Kelley and Moore were able to take the time to rest and just be chefs again. “It’s just been fun. We took that time to grow as cooks and inspire each other, and we would have bread tastings or bread contests with each other,” she says. For some of Moore’s bread work, check out the summer focaccia on this week’s pop-up menu (spoiler: there’s summer squash, roasted garlic, goat cheese, and basil pesto involved).

Kelley and Moore would like to have a brick and mortar at some point, they say, but under a different name. For now, they’re having fun with Better Half as soon-to-be better halves.