VanTrust Real Estate will break ground in April on a 621,874-square-foot speculative industrial building in the East Dallas suburb of Forney.

“In the past year, North Texas has emerged as one of the nation’s premier industrial destinations,” said Bill Baumgardner, executive vice president at VanTrust and head of the company’s Texas office. “As the market continues its upward trajectory, Forney and Kaufman County as a whole, are the next frontier for companies looking for developable land and access to a competitive labor force.”

At year-end, Dallas-Fort Worth continued to see positive industrial absorption, with demand in the area surpassing 23 million square feet. The East Dallas corridor experienced a 1.2 million-square-foot total net absorption during the 2020 calendar year, with nearly 550,000 square feet of industrial space under construction, according to CBRE.

Nathan Lawrence and Krista Clark of CBRE are managing the leasing assignment of the Forney Distribution Center. The project is slated for completion in May 2022.

Permits have been filed for Phase I of the Southport Logistics buildings. The $60 million development will include two cold shell industrial buildings, totaling about 2.1 million square feet. Construction will begin in March 2021 and end in March 2022. Ware Malcomb will lead the design.

Permits have been filed for Langdon South, the 282,000 square foot, 4-Story multifamily development on Coit Road in Plano. Construction on the $42 million project will begin in June 2021 and end in October 2023. Hensley Lamkin Rachel will lead design.

Permits have been filed for Langdon North, the 280,000 square foot, 4-Story multifamily development on Coit Road in Plano. Construction on the $42 million project will begin in June 2021 and end in October 2023. Hensley Lamkin Rachel will lead design.

The Riley, a 262-unit multifamily property with five retail spaces located in the CityLine mixed-use development in Richardson, has sold. IPA’s Joey Tumminello, Will Balthrope, and Grant Raymond represented the seller, JLB Partners, and procured the buyer, TTI Capital.

Permits have been filed for Phase II of the Independent Financial office building at 7677 Henneman Way in Mckinney. The $12.6 million development will be 6-stories and 150,000 square feet. Construction will begin in August 2021 and end in April 2022. Corgan will lead the design.

Saltbox, flexible co-warehousing space for entrepreneurs and startups, has opened its second location in Farmers Branch. The 66,000 square-foot facility offers 100 private co-warehousing suites and 15 office spaces, in addition to an array of modern office amenities and conveniences.

Common Desk signed its first location in McKinney at 300 East Davis St. in Historic Downtown McKinney Square. They will transform the building into a coworking and flexible office space. Its McKinney space will offer just over 34,000 square feet across two floors.

Permits have been filed to build Manna Plaza’s shell, an expected multi-use office and dining center at 1012 McArthur Dr. in Carrollton. Construction on the $2 million, 29,921 square foot development will begin in April 2021 and will be completed by December. FK Architect will lead design.

OP2 Labs has relocated its headquarters to 18,800 square feet at Riverbend West Business Park. OP2 Labs, recognized as one of INC 5000’s fastest-growing companies in 2020, felt that moving its corporate headquarters to the space at 1825 Handley Ederville Road would allow them to accommodate rapid growth in both the short and long term.  With Whitebox Real Estate, Sean Smith, Jade Scott, and  Brendan Zrowka represented OP2 Labs, Inc on the transaction, and Todd Hawpe of Transwestern represented the Landlord.

GFM Ministries sign a 4,334-square-foot new lease at The Hills at Decker Court. Ben Crancer, Jade Scott, and Brendan Zrowka of Whitebox Real Estate represented the tenant on the transaction, and Parker Morgan of Younger Partner represented the Landlord.

726 Properties renewed its lease of 354 SF at Bedford Place I in Bedford. Marshall Mays and Geoff Shelton with Holt Lunsford Commercial represented the landlord, 1901 Properties.

Permits have been filed to build a new 38,623 square foot South Loop Self Storage building at 1135 FM 982 in Princeton. The $3 million development will include office space, as well as a 14-story storage building. Construction will begin in May 2021 and end in May 2022. HUO Architects will lead design.

Hickory Creek Plaza in Denton and Towne North in Irving have sold for $37.2 million. Hickory Creek Plaza is a 28,134 square foot retail center shadow-anchored by a Kroger Signature store. Two bank outparcels ground leased to Chase Bank and Wells Fargo were included in the sale. David Disney and Adam Crocket of DIG represented Regency Centers on the sale, and the property was purchased by a private REIT. Towne North is a 124,289 square foot shopping center anchored by El Rancho Supermercado and is currently 97 percent leased. David Disney and Adam Crockett of DIG handled the sale on behalf of an entity controlled by Nayeb Group, and the buyer was an out-of-state private equity firm. 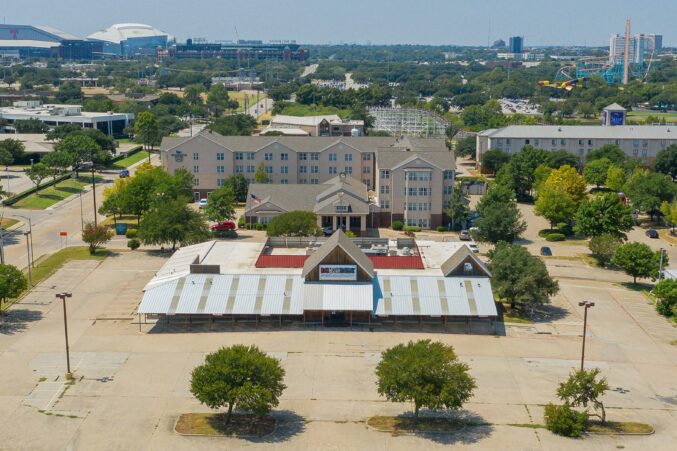 Permits have been filed to build a 4,885 square foot Landshark Express Wash & Detail at 800 Exposition Ave in Dallas. Construction on the $1.7 million project will begin in April 2021 and end this December.

Permits have been filed for a 4,400 square foot Westland Market to be built at 7493 Rendon Bloodworth in Mansfield. Construction on the $1.2 million project will begin in March 2021 and will be complete by this October. Morales Design Group will lead design.

Taco Heads has signed a 3,700-square-foot lease at 2341 N. Main Street in the heart of the Fort Worth Stockyards. This will be the restaurant’s second location, which is slotted to open in Spring 2021. Stream represented KRS Realty Advisors in the transaction, and it brings the building to 100 percent leased, with popular cowboy boot brand Tecovas next door.