Even if you haven’t heard of Kevin Curry, you’re probably aware of Fit Men Cook. What started as a Tumblr blog back in 2012, and a way for Curry to build and connect with a community of fellow healthy eaters, has evolved into a veritable media empire. There’s his YouTube channel (close to 500,000 subscribers), an app that’s been downloaded nearly 1 million times, an Instagram account (1.3 million followers), and, most recently, a cookbook, with more than 100 recipes focused on what Curry does best: healthy meal prep.

“The book is basically everything I’ve learned through social media and interacting with followers, then putting that into one journey. So it’s much more than just recipes,” says Curry. “It’s actually giving people a blueprint on how to live a healthy life.”

With New Year’s resolutions just being set in motion, Curry was kind enough to share simple tips on how to become a healthy meal prepper, his favorite recipes from the book (which features photography from longtime D Magazine contributor Kevin Marple), Dallas fitness, and his love of Whataburger (for “treat meals,” of course).

What’s a simple, manageable way to get started creating a healthier lifestyle?
When people say, “I want to eat healthy,” or would like to be healthier, they look at that end goal and they want to get there tomorrow — like the next day. And that’s just impractical. My number one advice to them is to just start small. Start right where you are and make incremental changes to your diet. Yeah, there are some people who can make a quick overhaul of their entire diet and stick with it, but the majority of us can’t. We are trying to undo years of behavior of bad choices — those things just don’t change overnight.

So, find one thing you could do differently. Once you’ve made that change, you’re going to get so excited. You’ll say, “Oh, I can do this, too. I can do this, this, and this.” You’ll be so enthusiastic about the small changes that you’ll end up transforming your entire diet without even realizing it.

Where’s the best place to get started when you want to start cooking healthier at home?
Find one healthy recipe that you want to make. Or you could say, “Alright, I really like hamburgers, so how can I make a healthy hamburger?” That’s how you start.

Also, don’t go and buy every healthy thing in the grocery store. People will make all these aspirational buys and look at all the fresh produce and think, Yep, real healthy. But by Friday, all that stuff is rotting in the back of your fridge. What I say is just buy one new thing. Personally, I didn’t even know what like arugula was for a long time. But I went and I bought some and I Googled a recipe. And that’s how I started. 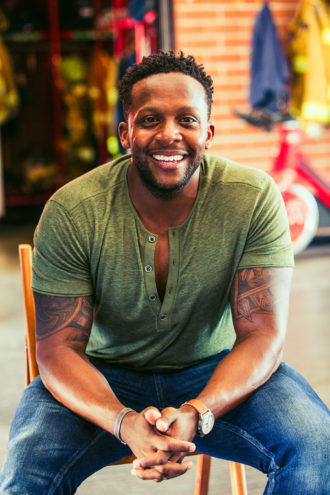 For even more of the charismatic chef, give his episode of Panera’s Food Interrupted series, which encourages a plant-based diet, a watch.
Richard Oak

Let’s talk about your book! Are there any recipes you go back to over and over?
There are quite a few, actually, that I really love. And one thing I was able to do with this book is include some of the follower favorites over the years. One of my favorites ones is Sweet Potato Lasagna. As a southerner, one of my favorite foods is sweet potatoes. It’s gluten free, and it basically replaces the pasta with thin slices of a sweet potato. So you get a nice, complex carbohydrate, but the sweetness of it actually balances really nicely with the salty, savoriness of the meatier lasagna.

Also, there’s a low carb Jambalaya recipe in there that I love. My mom is from Louisiana, so bringing the Cajun flavors and the excitement of Cajun food into a healthy setting was important to me.

Is there a particular ingredient or seasoning you go like to spice up blander ingredients?
There’s not one secret ingredient that you can just put on your food that’s going to make it taste super flavorful. You have to deconstruct a recipe. So, for instance, the lasagna that I just talked about. Instead of using super fatty beef, why don’t we use some bison or wild game? Then, with the sauce, instead of a really sugary store-bought sauce, you could just make your own with some tomatoes and add your own seasonings. So, it’s little hacks along the way that makes healthy food a lot more enjoyable, and you know exactly what you’re putting into your body.

Did you have a background in cooking when you started Fit Men Cook?
I was definitely a newbie. There was a trainer that wanted to charge me a whole lot of money for four weeks of working with him, but I just said, “Nope. I’m gonna to go to Half Price Books.” I bought every single book there they had about nutrition, and then I just went into the kitchen and started putting things together. So there was not a lot of background there. But you know, when you’re determined that you want a change, you’re going to do anything. And I was at that point. I just really was tired of the weight, and I was tired of the way that I felt. That’s what motivated me to figure it out.

Where do you work out around town?
I really like City Surf. I’m not even how I found out about it, but I was like, “Oh. That looks like fun.” I tried it out and ended up paying for like 10 classes because it was just something out of the box and it challenged me in brand new ways. It really kind of humbled me, too.

The other spot that I really love, I’ve been going there for almost two years now, is Mohler’s MMA. It’s right there in Deep Ellum. I love their endurance boxing class. It’s a total body workout. I get that twice week, and I that just kicks my butt.

Where do you eat healthy around Dallas?
My favorite restaurants are HG Sply. I’m always liking what they do there. It’s one of the places where you can go to get a good satisfying meal and not feel bloated. I think that’s the whole point of eating. And then I love Rapscallion.

Do you allow cheat days?
That’s going to be Whataburger. There’s just something about Whataburger that connects with me. Where else can you go in and get a burger on Texas Toast?

Getting Married and Getting Skinny? Try Our Bridal Gown Slim Down.