The Mavericks Are a Chore on Offense, and There’s No Easy Solution

Shouldn't a team supposedly built to score points be better than mediocre at it?
By Iztok Franko | December 17, 2021|9:01 am
Advertisement

Watching the Dallas Mavericks try to put the basketball in the hoop has become a grind. A team that was the most exciting offense in the NBA just 15 months ago is currently ranked 20th on offense. The same team that averaged 117 and 112 points the last two seasons, respectively, has failed to reach 100 points 10 times this season, which is only 28 games old; all last season, over 72 games, that happened just 11 times.

Which begins to explain why, after blowing a 17-point lead in a loss to Brooklyn earlier this month — another night when the Mavericks failed to hit triple digits — a visibly frustrated Jason Kidd characterized his team as “a jump-shooting team that just doesn’t make jump shots.” And who could blame him after a night when his team shot 9 of 46 from beyond the arc, including a ghastly 1 of 12 in the fourth quarter? (The next day, Mark Cuban tweeted out a long thread theorizing that the new NBA ball was to blame. Make of that what you will.)

Shooting struggles were not the only issue brought to national attention during the Nets game. Reggie Miller talked at length on the broadcast about Luka Doncic’s weight and his slow start this season; Doncic late agreed he’s had issues, saying, “I know I’ve got to do better.” You don’t need to be an expert to figure out that the offense will look much better once Doncic gets back to his All-NBA level and the Mavericks hit on more than 33 percent of their threes. This team is built around Doncic’s ability to drive, collapse the defense, and find a shooter who will make the open shot. If both parts of this equation are not up to par, it’s logical that the results are not all that great.

Shooting struggles aside, though, shouldn’t a team that is built for offense — per Kidd’s own words — still be better than mediocre at it?

The answer is yes, and it starts with Doncic and his decline in efficiency. Doncic’s added weight saps the burst he had in prior seasons, so he has to work harder to drive by defenders and get in the paint. That’s a big problem for a Mavericks team that is the worst in the league at getting to the rim and getting shot attempts in the restricted area. To be fair, they were 28th (2020-2021) and 29th (2019-2020) in rim frequency the prior two seasons, but the gap has widened this year in no small part to Doncic, whose rim frequency declined from 23 percent last season to 17 percent this season.

Blame the added weight, blame new rules that allow defenders to be more aggressive, but I don’t think Kidd and his new offensive system are doing Doncic many favors, either. Back in August, Kidd said he wanted to make the game simple and easy for his young superstar, to give him answers to the proverbial test. We’re now a third of the way into the season, and it looks like Kidd is adding new questions to the quiz rather than solving questions on the existing ones.

The first big challenge is the lineups. I’ve written about the problem of two-big lineups a lot here in the past, and by now we all understand the logic of preserving Kristaps Porzingis’ body during the regular season. This isn’t new; the Mavericks did play Porzingis next to a center under the prior coaching staff. What is new is Kidd using those two-big lineups way more than Rick Carlisle ever did and those lineups with Porzingis at the power forward spot hurting the offense to the extent we haven’t seen in the past. Last year, Doncic spent 7 percent of his playing time with Porzingis paired with another center in the frontcourt. This season, it’s 26 percent. Lineups with Porzingis at the power forward spot currently rank among the worst in the league on offense, in the bottom 6 percentile among all NBA lineups.

Those two-big lineups and the resulting awkward spacing (more on that later) are a big reason why attempts at the rim, and consequently shot quality, have decreased. Per Second Spectrum, the Mavericks have regressed from 23rd in shot quality last season to 28th this year. Shot quality is not always the best measure, but it’s evident that the Mavericks are shooting more mid-range shots and are generating fewer easy ones at the rim. Dallas declined from 14th in the NBA on drives last season to 24th this year. Most of the advanced tracking data — drives, Doncic pick-and-roll efficiency, volume of uncontested corner threes and shots in the restricted area — is worse when Porzingis plays next to Dwight Powell or any other big. Porzingis-Powell lineups rank in the bottom 1 percentile – as in, worst in the NBA — in rim frequency.

The interesting thing is that these lineups worked really well on offense under Rick Carlisle (albeit while struggling on defense). A big part of that was clearly defined roles: the center was the screener and roller, while the four-man was a spacer. When Porzinigs played with Powell, the former would stretch the floor, and the latter would roll. Meanwhile, Kidd’s main focus on offense was to get Porzingis back to an All-Star level, and the only way for that to happen was to not confine him to a defined role. Per Second Spectrum, Porzingis is now used as a screener for Doncic twice as often even with Powell on the floor. It’s a noble idea for Porzingis, but the problem is defenses mostly ignore Powell when he is not used as a screener, instead packing the paint to prevent the drive. When Porzingis sets a screen for Doncic with Powell on the floor, the Mavericks score just 0.733 point per chance; by comparison, Doncic and Porzingis were the best pick-and-roll combo in the league last year at 1.127 points per chance.

Yet Porzingis spending more time at the power forward spot — 43 percent of his playing time this season compared to 18 percent last season — is not this offense’s biggest challenge. The most evident difference compared to prior seasons is spacing. It seems that Kidd and the new coaching staff just have different priorities than the old regime, and spacing is not on top of the list. Carlisle’s crew sought to maximize Doncic’s ability by spreading the floor as much as possible, so much so that they drew 4-point lines in practice court to emphasize spacing by placing shooters deep in the corners and high on the wings. During games, you would see players space the floor several feet behind the three-point line. This coaching staff, meanwhile, is more focused on defense. When they have the ball, the focus is so many of the things that might get Porzingis closer to how he played in New York. We see more actions inside the arc, more post-ups and elbow actions. Those spacing lines on the practice court have been replaced with new ones used to define positioning on defense.

This is still an offense dominated by Doncic, and the Mavericks still run a lot of spread pick-and-roll actions for him. But the spacing is different. Just look at this image of last year … 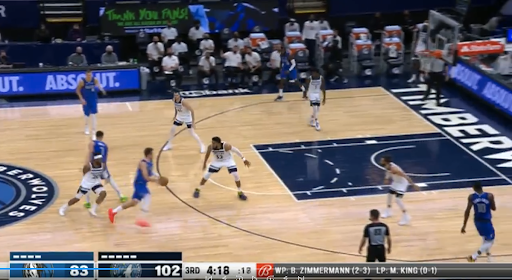 … compared to this year. 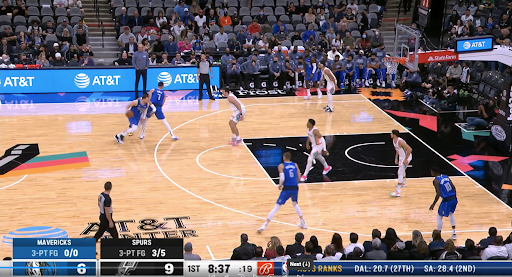 You might think a foot or a few inches don’t matter that much. But I’m inclined to agree with Carlisle’s words after a game against the Lakers last season when he said, “The NBA game, as big as the court is, it’s a game of fractional inches with the athleticism, quickness, and ability to cover ground NBA players have.” This season it seems that the Mavericks often come up short an inch when they drive to the basket.

Twenty-eight games into the season, we still see Porzingis trying to seal his man during an isolation play or pick-and-roll. We see Porzingis playing more in the “dunker’s spot” — the area along the baseline that is just outside the lane — even as the lone big on the floor. The most glaring recent example came late in the fourth quarter in the aforementioned loss to Brooklyn, with Dallas trailing 98-97 and 2:37 on the clock. Doncic took off toward the rim and managed to beat his man into the paint after Jalen Brunson set a pick. A year ago, with the floor spaced, it’s an easy go-ahead layup. This time, Porzingis was lurking by the basket, and his defender collapsed onto Doncic, forcing him to awkwardly kick the ball out to Tim Hardaway Jr. in the corner, who promptly missed the three.

All things considered, it’s still too early to take this offense as the final product. As our own Brian Dameris put it, the regular season is a lab, and the new coaching staff is experimenting. It hasn’t been all bad, either. Porzingis looks way more comfortable and aggressive going at mismatches. If this continues, it will prevent opponents from defending the Latvian big man with wing defenders and go a long way toward unlocking the Doncic-Porzingis pick-and-roll in the playoffs.

But to get there — let alone win a series — everybody on the Mavericks must bring his A game. The talent level on the roster and the current standings just don’t allow much more experimenting. The shooters need to start making open shots. Doncic needs to be better and get in shape. And it’s time for Jason Kidd to start providing those answers for the quiz by following what his mentor Frank Vogel just did to unlock the recent offensive tear from LeBron James and go away from two-big lineups. There’s still time left for a turnaround. But they’re starting to run out.

Be the first to know about Dallas' best events, contests, giveaways, and happenings each month.
Dallas Mavericks

Plus: FC Dallas in the playoffs and Dak Prescott's long-awaited return.
By Mike Piellucci
Basketball