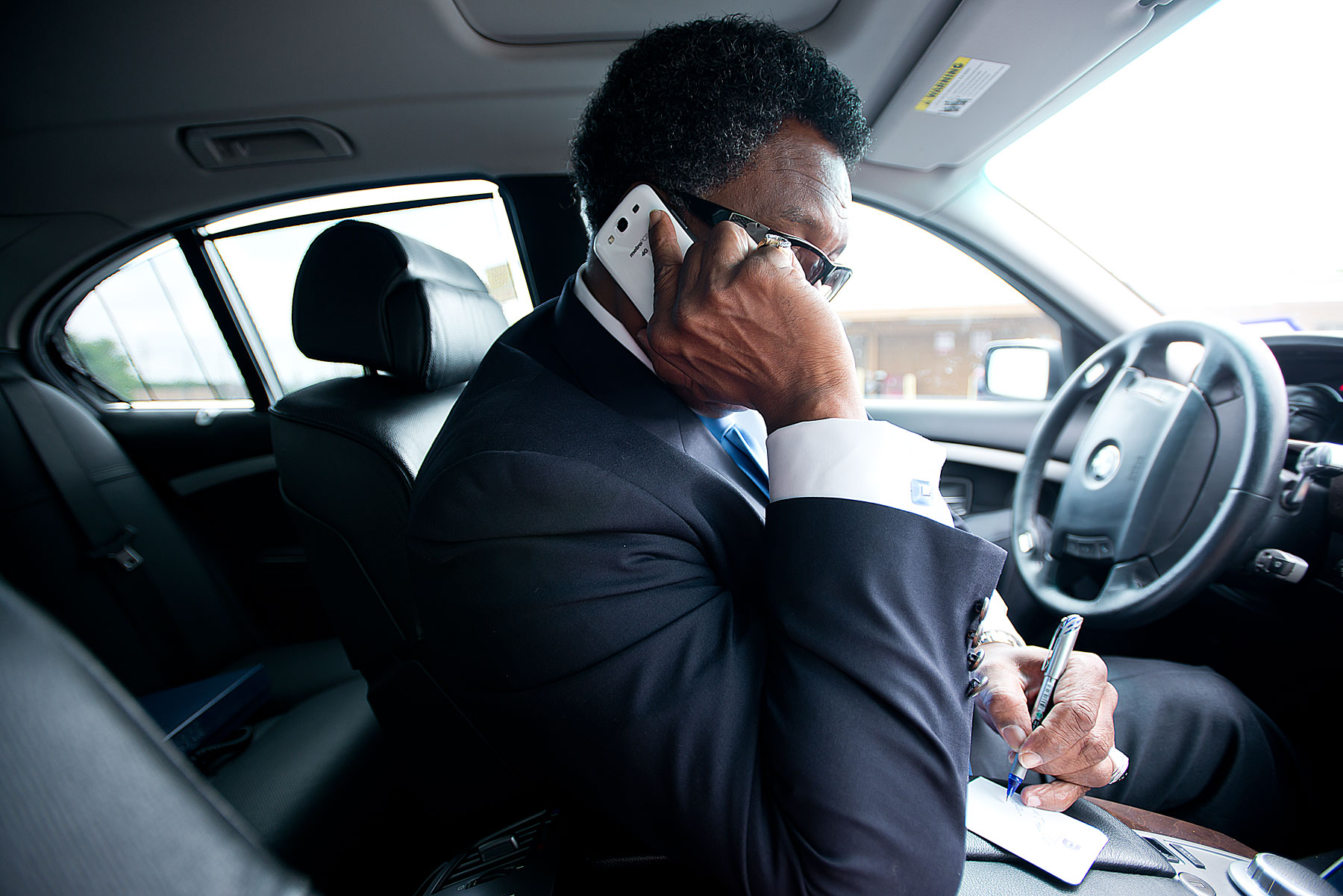 Caraway on one of his five phones.
4.

He may actually have more—six or seven or even eight is no more ridiculous a number than five—but he has five with him today, all within arm’s reach in the front seat of his BMW. Three of them, the ones he uses the most, are almost identical Samsung models, and so when someone calls him, and someone calls him pretty regularly—you don’t wind up with five phones by accident—he has to pick up one or two of them before locating the correct phone. It might be his daughter, Hawaii, or her daughters, Lanai and Maui. Or maybe it’s city staff, or a developer, or a neighbor, or a constituent, or his parents, or someone from his advertising and consulting company, or maybe a friend. It’s always someone.

Playing this phone shell game—the call was on the teal Samsung on the right all along!—doesn’t faze him in the slightest, so I assume Caraway carries five (or six or seven or even eight) phones with him all the time.

Caraway is well over 6 feet tall and, between the heels of those burgundy cowboy boots and a couple of inches of gray-flecked afro, he looms even larger. He has a voice to match, a cannon that fires italics and exclamation points and never needs reloading. He punctuates his sentences with his hands, nudging, tapping, elbowing—sometimes grabbing and shaking the arm of his listener.

“Come on, man.” He nudges me with his elbow. “This is what the fight is about. You see the opportunity. But it’s the missed opportunity.” He taps me a couple of times on the knee and points to the window, to make sure I see the row of knockdown buildings and overgrown trees he’s talking about.

“You look at all of this. What do you do with this?” He grabs my shoulder and shakes it. “And look what’s behind it—downtown.” He almost whispers this. “The whole Trinity. The whole piece of it. It’s right there. The whole piece. It’s all right here. So when the mayor is talking about growing south, well, goddamn it”—he softly punches me on the arm—“I’ve got a good place for him to get started!”

He laughs, staccato, huh huh huh, like the engine of a lawn mower trying to catch.

Caraway was the president of his senior class at Roosevelt High School, right here on Bonnie View Road, in 1970. But he got his first taste of government the year before. 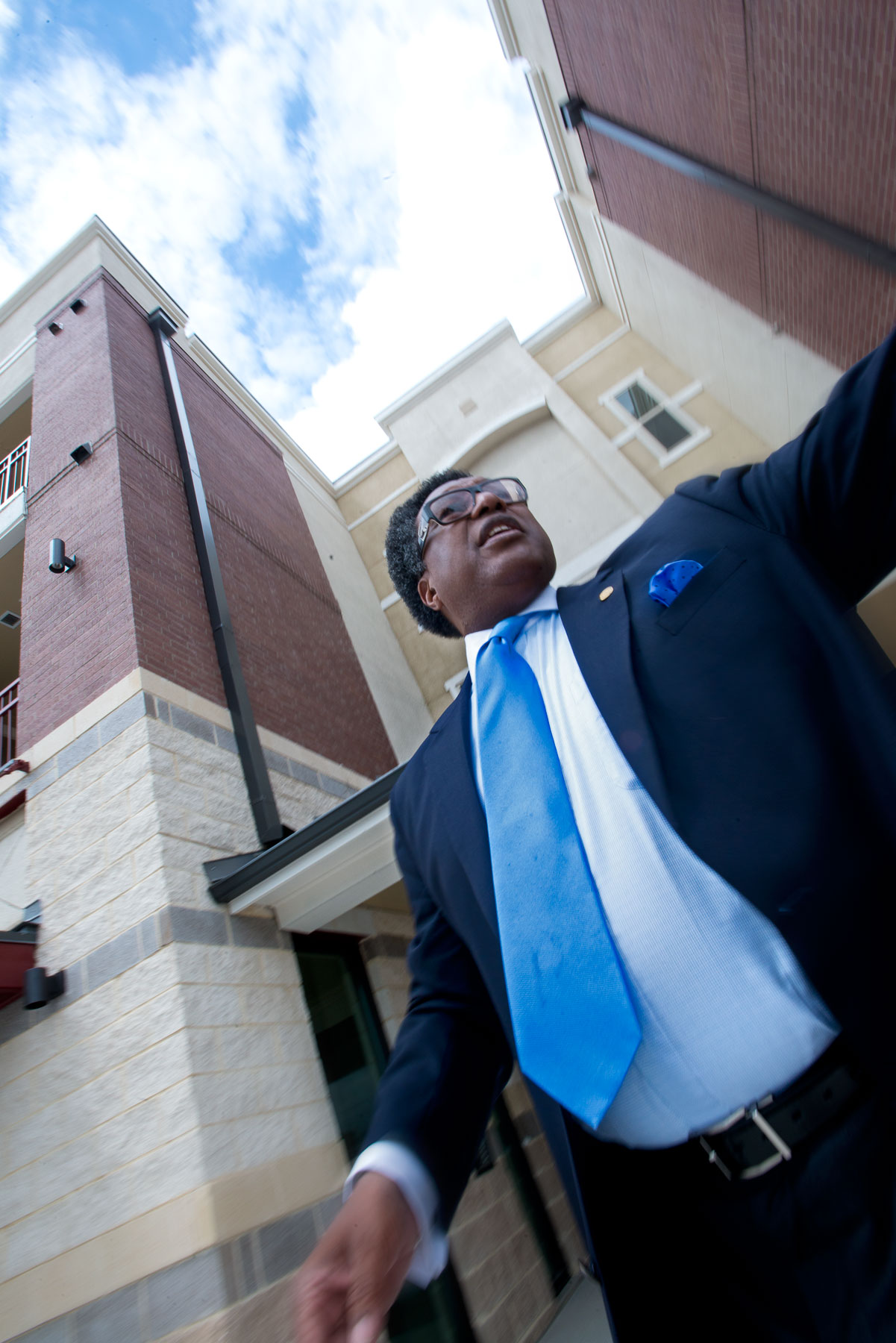 EXTREME MAKEOVER: Caraway in front of the Urban Village, the new apartment complex where two hot-sheet motels once stood.
7.

Cedar Crest Golf Course is just around the corner from his house. When Barbara served on the City Council from 1993 to 2001, she named her husband to the parks board. A music promoter, advertising salesman, and former radio DJ, Caraway didn’t have any prior political experience. The golf course was one of his first big projects.

The old golfers who played there told him that wasn’t always the case, that back in the day, Sunset, Kimball, and South Oak Cliff high schools held their proms at Cedar Crest, in a grand, three-story clubhouse, before it burned down, not long after black families from South Dallas started moving to Oak Cliff in the early 1960s. One of them—“this little old man, he had four fingers, Mr. Moore”—brought him some photos.

“So, at that particular point, I began, of course, to get a little bit more vocal and started challenging.”

“ ‘I want the same type of a clubhouse that was here before and I want it as white as the White House’—that’s what I told them,” he says. “That’s why it’s this color, No. 1. I told them I wanted white sand. I don’t play golf that well, but I said, ‘When Tiger Woods is playing, he’s got a bunch of white sand out there.’ But our sand was old—like dirt out there. You see that white sand over there?” He pokes at the windshield at a mound next to the parking lot.

“Said we couldn’t have a driving range. Said we couldn’t have one because of the trees and all this. There’s a driving range over there now. Okay. We had to kick their butt. It’s a shame we had to kick their butt to make ’em do it. We didn’t have irri-ga-tion. These folks were dragging freaking water hoses to water this goddamn golf course, okay? But now we have irrigation. I understand why people don’t like me, because I’m a person that’s going to fight to get things done. But you see: a beautiful golf course. You see: white sand. You see: the driving range. You see: irrigation.”

“Of course, now I’ve got to fight to get them to come paint it,” he says, as we pass a rusty section of fence, and then another one. “Come on, man. Why do I have to wait to be the one to say come paint? I shouldn’t have to do that, all right. Little bitty things I’ve got to pay attention to.”

Caraway’s parents were one of the black families that moved to Oak Cliff in the early 1960s. Mattie and Bruce bought their house on Corinth Street Road in 1961 and have been there ever since. Mattie had a beauty shop in the back. They’re both 87 and retired now.

Caraway knocks on the door and is greeted by Bonnie, the woman who takes care of his mother, who has dementia.

“Hey, Mama,” he says over Bonnie’s shoulder. He walks in and hugs the tiny woman swallowed in her housedress. His father is still asleep.

“You don’t need to know where my medicine is unless I want you to know,” Mattie says. She’s tiny, but she’s still the boss.

Bonnie eventually finds it as we’re on our way out. “She ain’t took none of it,” Caraway says, heading back in the house.

“Let him deal with it,” Bonnie says, when the door closes behind him. “She already jumped at me today.”

The soundtrack for our trip is not Johnnie Taylor—he turned it off after a few songs—but the constant chiming of the BMW reminding him to put on his seat belt. Caraway drives however he wants. We stop at green lights and sit there through three light changes if he has a point to make. We cruise slowly with hazards flashing, or not; we stop wherever, whenever.

He has a voice to match, a cannon that fires italics and exclamation points and never needs reloading.

“Look, look, look, look at this stuff.” We’re creeping along 11th Street, just past the Columbia Packing Company. “Look at that car right there.” It’s the decaying carcass of what looks like was once a BMW.

“When I’m in staff’s ass and I’m in code’s butt, I’m saying, ‘Hey, man, why am I the one gotta come show you this?’ Okay? Now, code is doing a great job. I do not complain with code. They respond to me quicker than anybody. But I want all this torn down. Yes, I want it torn down. Look at this. Do I want this? Does the community deserve this? Look at that man’s pants.” He stops abruptly and leans across me to yell out the open window:

“Pull up them pants!”

While the car is stopped, it’s a good opportunity to point out that, not long ago, Caraway could not have done that. Not yell at someone to pull up his pants, but do so through an open window. He had complained about Columbia Packing Company’s slaughterhouse operation for years, how it was polluting the environment—and his district—in every way imaginable. After pictures of the Trinity River stained red with pig blood surfaced, he was finally proven right. The facility still exists as a meat distributor, but he got the slaughterhouse shut down.

“And right here, you can let your windows down now, and you don’t smell nothing, and you don’t hear no pigs squealing,” he says. “You could not do this. These people in this neighborhood—I mean, the trucks would park right out here, with the pigs on them, squealing, getting ready to go in there and get killed. Okay? And this smell would go all the way to my house, and across the bridge. These guys are a nuisance.”