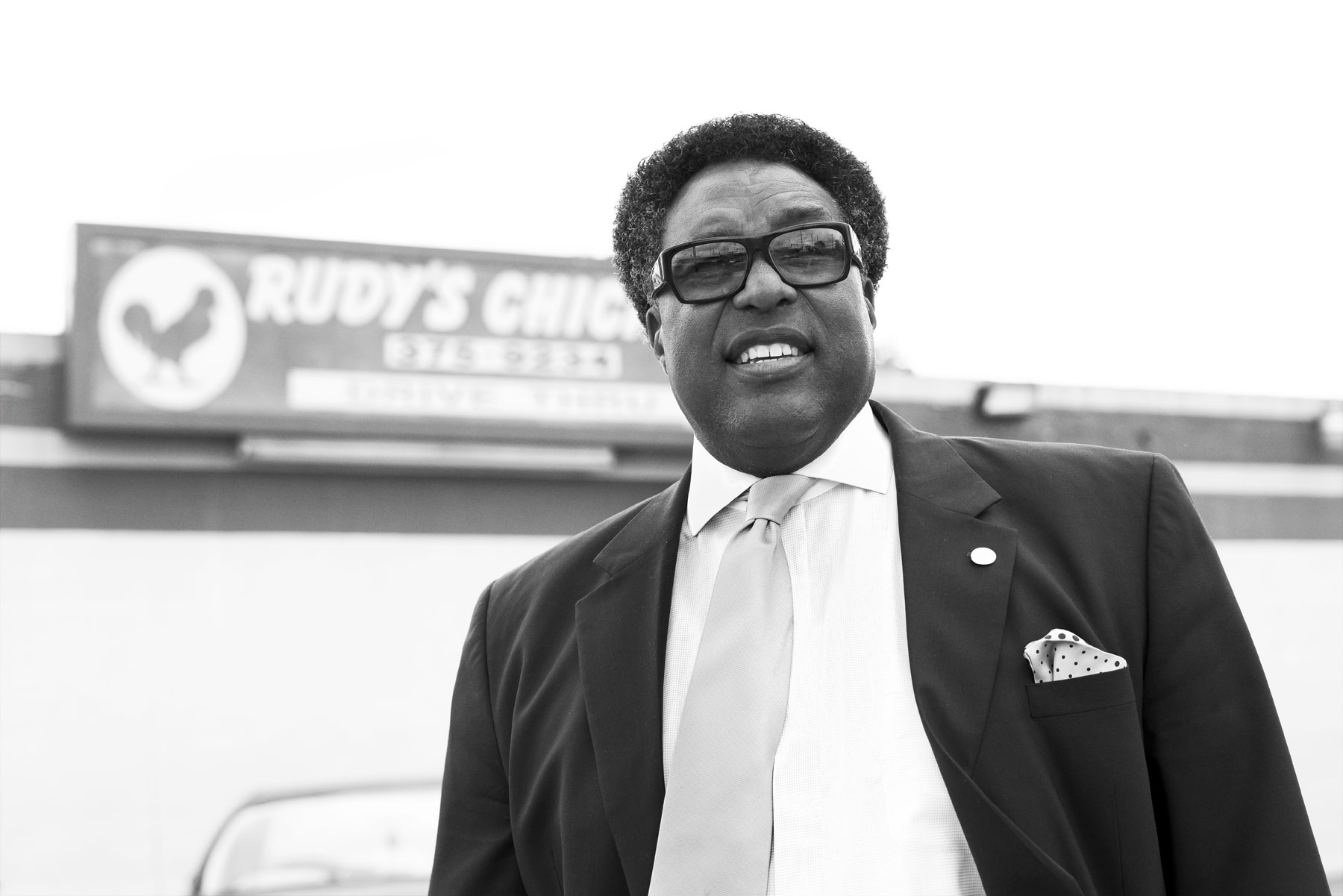 Caraway, pictured here in 2015, stands outside of Rudy's Chicken in South Dallas. (Photo by Elizabeth Lavin)
11.

The new location of Rudy’s Chicken has only been open a couple of days. It’s important to Caraway that everything runs as smoothly as possible. He knows how many eyes are on it, because of the way the deal to move Rudolph Edwards’ popular chicken joint just one lot over from its previous location was reported. Since last May, when the city agreed to invest $890,000 on this corner of Lancaster Road, it has been called a grant. In the interest of accuracy, I’ll let Caraway explain why that’s not true.

“Rudy owned this,” he says, once the drive-through is under control. “This clear spot right here? Rudy owned that. That was a building that’s no longer here. From right here, there was a fence—there used to be an old car yard here. Rudy owned this. Right here where Rudy is, that was Katie May’s. Rudy bought that.”

In other words, that $890,000 wasn’t a grant, he says. Much of the money went toward purchasing the land Edwards had smartly acquired, with the provision that he move his business to the corner so the rest of the property could be developed. He spent more than $600,000 of that money building a new restaurant.

“And then they say they gave him all that?” Caraway says. “The city now owns this, this, that, this—all of this behind and across the street. If it hadn’t been for Rudy, they wouldn’t have an opportunity for what’s getting ready to happen. This building is coming down. There’s a new development—a business/retail strip that’s coming right here. In exchange, Rudy deeded all this back to the city. So they didn’t give him that money. I say, ‘Why y’all lie?’ ‘Well, you know, they wrote it up wrong. This is the way they presented it to the Council.’

“This is why I don’t trust them, because they write up any goddamn thing, tell us anything, we’re voting on it, then they try to clean it up after we’re gone.”

If you don’t understand why the city would invest in a corner anchored by a fast-food chicken restaurant, I can tell you that both lanes were full for the entire hour we were there. So there is always going to be car traffic. I watched people wait patiently in their cars for almost half an hour, and not one person left. Why?

“We call it ‘death chicken,’ ” says the woman in the SUV. “’Cause we about to kill each other to get it.”

Farther down Lancaster, near the VA hospital and Barack Obama Male Leadership Academy, there used to be “two sleazy, drug-infested, prostitute-carrying, hot-sheet motels”—the Southern Comfort and the Sunset. Caraway and Michael Davis, along with the late Bishop Larry McGriff, worked to get them closed.

“But I want to show you what we got now,” Caraway says, slowing to a crawl in the right lane. “Look at the Urban Village.”

The apartment complex we’re at would not be out of place in Uptown or anywhere else north of Interstate 30. The developer is Sherman Roberts, the same guy who is working on the deal around Rudy’s Chicken.

“Look at what was the two hot-sheet motels. We stood here, and we shut ’em down, then we tore ’em down, then we found a way to find the resources to get this project. Let me tell you something: these are as nice and nicer than the Gables. These are fantastic. And my thing has been, if you clean it up, then folks will come. We cleaned it up, and look what’s here. Hey, man—off the freaking chain.”

Caraway has found it is harder to get a rotting house torn down than a hot-sheet motel. He stops to show me what he’s talking about. The house he shows me could only technically be called a house. The roof has caved in, and the walls look like they’d follow with a hard push.

“We have the ability to knock this bitch down tomorrow, and if anybody don’t like it, sue us. Ain’t nothing but another lawsuit that we’re going to end up settling somehow, anyway.” He laughs. “That’s why I’d never be the mayor.”

He laughs even harder.

The Pizza King we pass on Lancaster was once a Pizza Inn, and that Pizza Inn was where Caraway worked when he came home after college at Texas Southern University.

“They used to call me the Black Italian,” he says. “I could fix the hell out of a pizza.”

“Like that little bad doll,” he says. They do their National Night Out together. “I call him Chucky because he is something else. I love me some Scott Griggs. Okay. I think I’m gonna change Philip Kingston’s name to ‘Spanky.’ Because they are too much. I love ’em and enjoy working with them.”