Preston Lancaster spent the summers of his teenage years working at his mother’s pizza restaurant in Springfield, Missouri. She appreciated his help but gave him strict career advice: “Whatever you do in life, do not get into the restaurant business.”

Lancaster was a scratch golfer, and, after graduating from Lake Highlands High School, he received a full golf scholarship to the University of San Diego. He graduated in 2006 with a degree in business administration with an emphasis in finance. If Lancaster had taken his mother’s advice, he could have taken a shot at the pro circuit. Instead, he put down his Titleist blades and, in 2007, bought Palio’s Pizza Cafe, a small pizza restaurant in Little Elm. 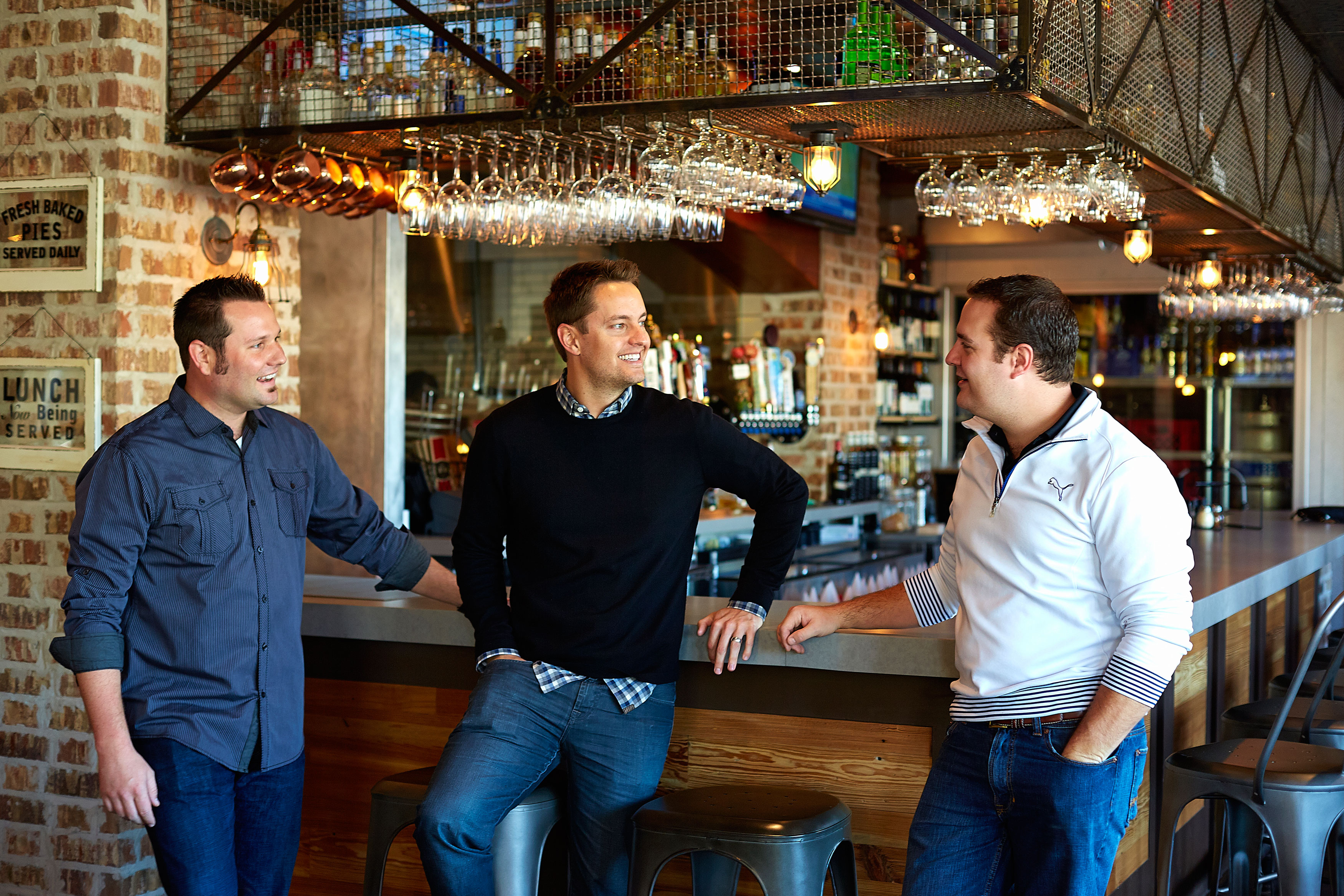 THREE AMIGOS: (from left) owners Tony Smith, Preston Lancaster, and Jimmy Cannon
After a lengthy phone interview with Lancaster, I wanted to call his mother and enlist her help in conducting an intervention at Taverna Rossa, Lancaster’s new restaurant in Plano. I rolled my eyes at some of his youthful, naïve reflections on the restaurant business.

I asked him how he came up with the concept for Taverna Rossa. “We basically serve the kind of food we like to eat and the kind of beer we like to drink, and we think that is what the people of Plano like, too,” Lancaster says. “We set out to create our favorite restaurant. I enjoy serving people and creating a product to make people happy and have fun.”

He did not mention money, investors, food costs, or a passion for cutting-edge cuisine.  Who gets away with a making-people-happy business plan?

Halfway through the conversation, I quit taking notes, hit the speaker button on the phone, and started filing my nails. His voice boomed across my desk. Blah, blah, blah “locally sourced whenever possible.” Yadda, yadda, yadda “rustic craft pizza and beer bar.” “Brian Luscher consulted on every dish except the pizza” et cetera, et cetera, et cetera. “My dad and I are investors in The Grape.” 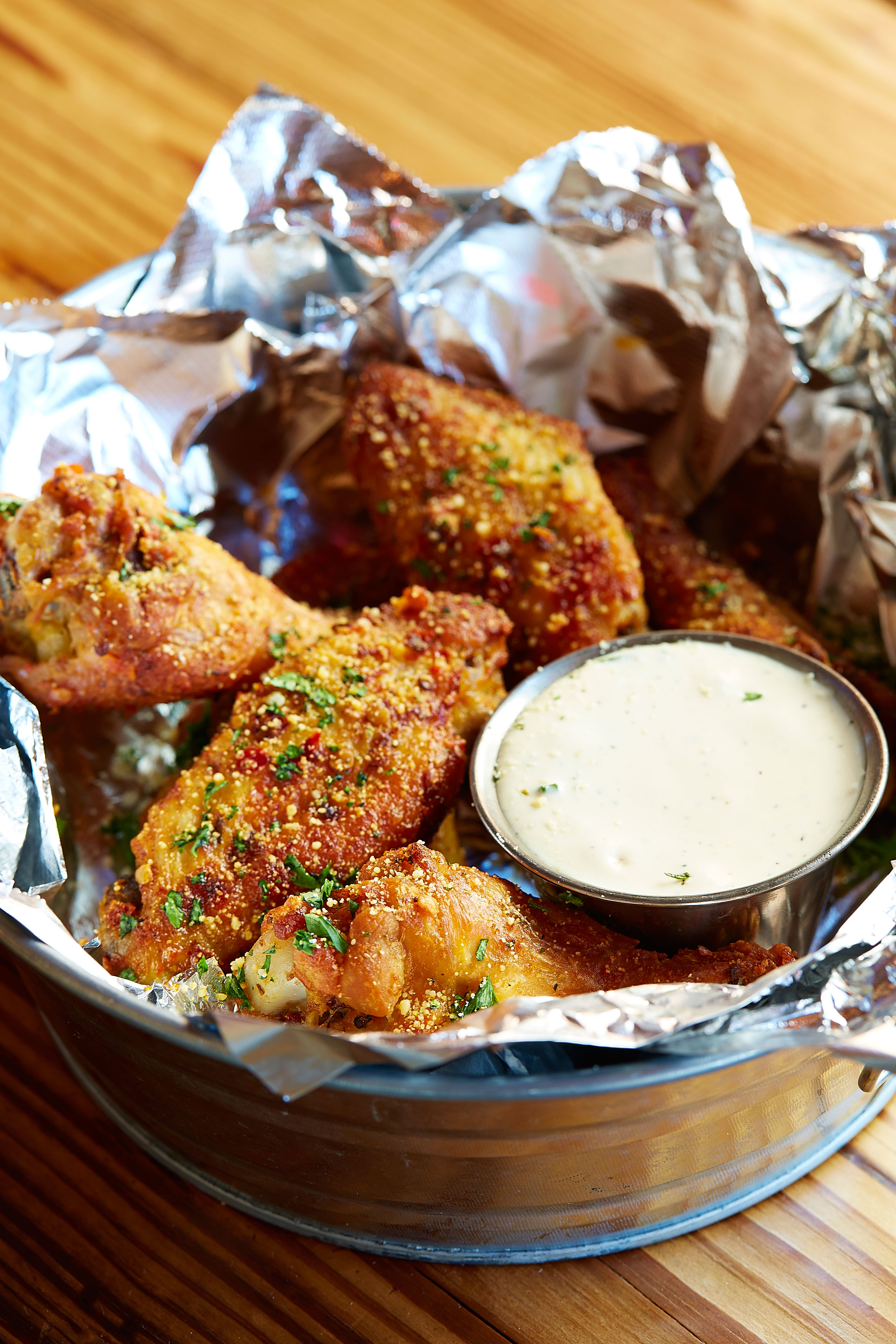 HEARTY FARE: (left to right) Calabrian Chili Baked Wings
I dropped the nail file and picked up the receiver.

Lancaster and Luscher, the chef/owner of The Grape, have been friends for 10 years. They met when Luscher was the opening chef at TPC Craig Ranch, a private golf club in McKinney where Lancaster and his father are members. “I got to know Brian, and we just hit it off,” Lancaster says. “He introduced me to one of my (eventual) partners, Tony Smith, who was working there in the front of the house.”

I called Luscher to see if this guy was legit. “He’s a sharp guy,” Luscher says. “He and I would talk for hours about restaurant concepts. We started putting together business plans and showing them to each other almost like it was a hobby.”

Lancaster’s former hobby is now a sizable portfolio of restaurants that includes four of the 22 Palio’s Pizza Cafe locations (the others are independently owned and operated franchises), Cadillac Pizza Pub in McKinney, and Taverna Rossa in the Lakeside Market at the corner of Preston Road and Spring Creek Parkway in Plano. Not bad for a guy who just turned 30.

Pizza is what they do best. If you aren’t a pizza snob and are a fan of thin crusts, you will be more than satisfied.

Taverna Rossa is the most elaborate project undertaken by Lancaster and his partners, Smith and longtime friend Jimmy Cannon. The core of the menu is “hand-crafted pizza and craft beer.” The pizza has a thin and crisp, almost cracker crust topped with trendy ingredients preceded by all of the current buzzwords: all-natural, local, Texas, house-pickled, hand-pulled, and homemade. They proudly list most of their local vendors on the menu: Village Baking Co., Hamm’s Meat Market, Local Yocal, Henry’s Ice Cream, Luscher’s Post Oak Red Hots sausages, and Lemley’s Produce.

The chef and general manager is Matt Staph, who worked under Graham Dodds in the kitchen at Central 214 for a year and a half. Luscher collaborated to create the small plates, salads, pastas, and hot sandwiches using a tight list of ingredients. Local sausages, roasted chicken, marinara sauce, and smoked brisket appear across the menu in numerous dishes. It is a smart and economical method to offer variations without overtaxing the kitchen staff.

Pizza is what they do best. Two brothers man the Wood Stone gas-fire pizza oven inside the exhibition kitchen. If you aren’t a pizza snob and are a fan of thin crusts, you will be more than satisfied. The Smokey Pie is slathered with a slightly sweet barbecue sauce and topped with brisket smoked by Hamm’s Meat Market, rough-cut white onions, a blend of mozzarella cheeses and cheddar, and flecks of local bacon. The 13-inch pie ($15) makes a robust appetizer for four or a meal for two, if you add a salad. I admired a delicate Local Goat and Fig pie with basil and pancetta while my meat-loving friends demolished The All-American, a pile of pepperoni, Luscher’s sausage, local bacon, and turkey Canadian bacon mixed with mozzarella and fontina cheeses. 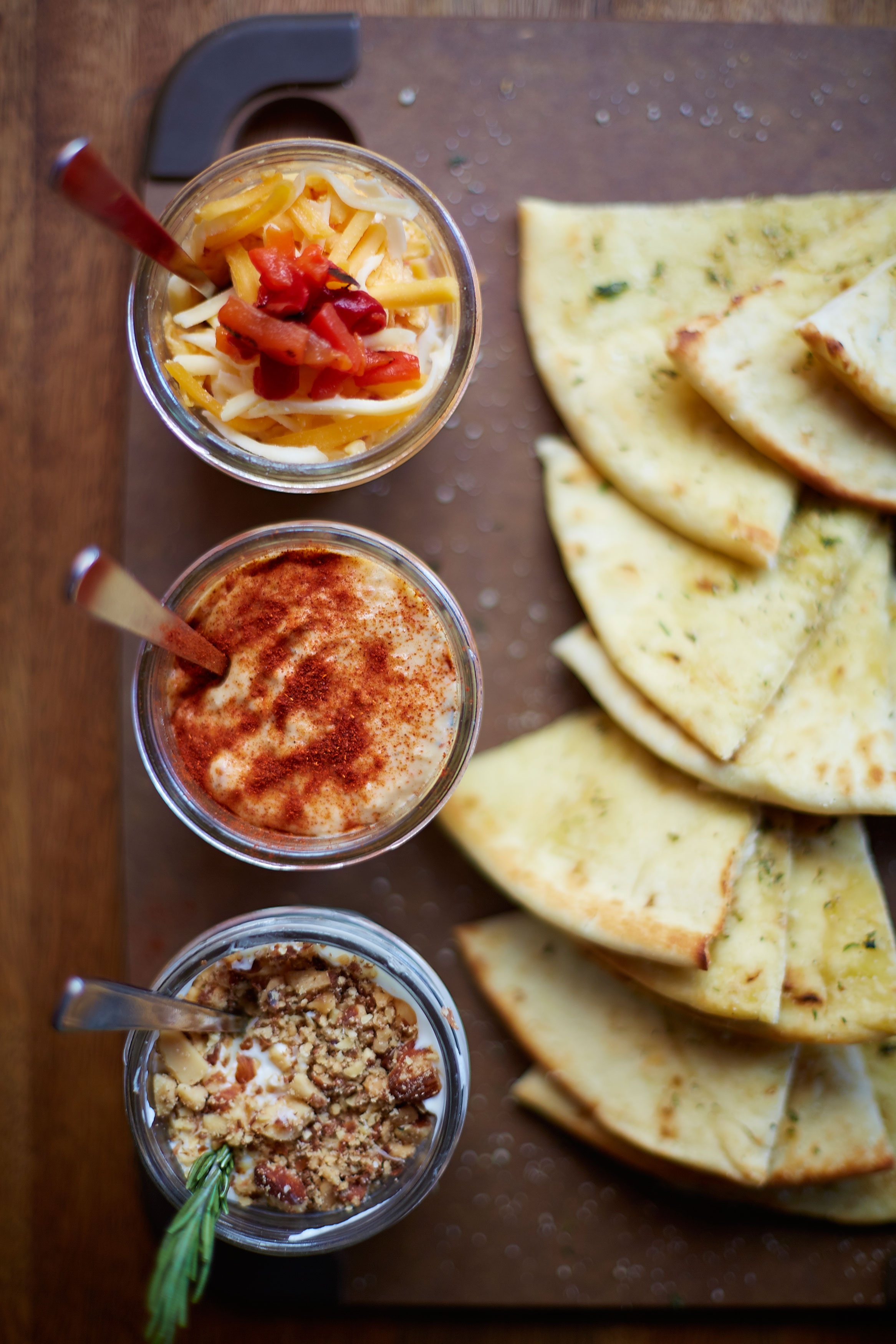 Mason Jar Trio
Other starters include an engaging and generous assortment of dips and spreads. Three small mason jars arrive on a wooden chopping block surrounded by triangles of warm pita bread. One is filled with creamy pimento cheese spiked with roasted red chiles and sharp cheddar; another contains spicy cannellini beans puréed, turning into a Southwestern version of hummus; a third contains whipped goat cheese blended with a bit of sour cream and topped with smoked almonds.

The Texas meat and cheese board is a work in progress. The assorted items were different each time it was ordered, but all combinations of smoked sausage, soppressata, and strips of peppercorn-smoked tenderloin served with local goat cheese, jalapeño jam, local honey, and spiced pecans were captivating and certainly beer-friendly. They’ve recently added Veldhuizen’s Redneck Cheddar and Local Yocal’s mesquite-smoked turkey to the rotation.

Salads are available in two sizes: solo and for the table. I’ve eaten all six on the menu and have no complaints. The Stag is an intense peppery affair with arugula and spinach tossed with pancetta, blue cheese, red onion, and cracked black pepper with a shaken vinaigrette. The Baby ’Berg Wedge is simple and well-designed. A triangle of crunchy iceberg lettuce is decorated with candied bacon bits, crumbles of feta, and finely diced Lemley’s tomatoes. It may be impossible to keep the green garlic dressing on the menu year-round, but I hope they figure out some way to bottle it. The pungent, seasonal garlic combined with a touch of sour cream is a lovely diversion from standard blue cheese dressing.

Staph should call Luscher and ask for a refresher course on the Texas Lasagna. The obscenely large serving, delivered in a 7-by-5-inch casserole dish, suffers from too much of too many things. The house-made braised brisket is strangled by thick layers of melted mozzarella and smoked provolone, an oddly tangy béchamel sauce, and a spicy meat sauce. Luscher’s Sausage & Meatball Rigatoni would also benefit from less cheese and no Alfredo sauce; it masks the robust homemade marinara sauce.

The Rossa BLT is a terrific sandwich and enough for two. Fragrant sourdough bread from Village Baking Co. is toasted and spread with  a heady lemon-garlic aioli before pancetta, Lemley’s tomato, arugula, and a sunny-side-up egg are stacked between slices. It is a terrific breakfast-for-dinner option or brunch dish. Either way, pair it with a spicy Bloody Rossa, the best cocktail I’ve tasted this year. Fresh tomatoes, jalapeños, cucumbers, horseradish, and okra are added to vodka and infused for four days. Two ounces of vodka are mixed with a blend of Ballast Point and Zing Zang tomato juices, a dash of Worcestershire sauce, olive juice, and bitters, and poured into a 16-ounce glass rimmed with Lawry’s Seasoned Salt and garnished with celery sticks, queen olives, and pickled okra.

There are 24 beers on tap and about 30 in bottles or cans. Familiar local beers, such as Lakewood The Temptress Stout, Peticolas Velvet Hammer, Franconia Wheat, Peticolas Golden Opportunity, Franconia Dunkel, and Revolver High Brass Blonde Ale, are on tap. They also feature an East Coast, West Coast, Dogfish, and local draft beer rotators. 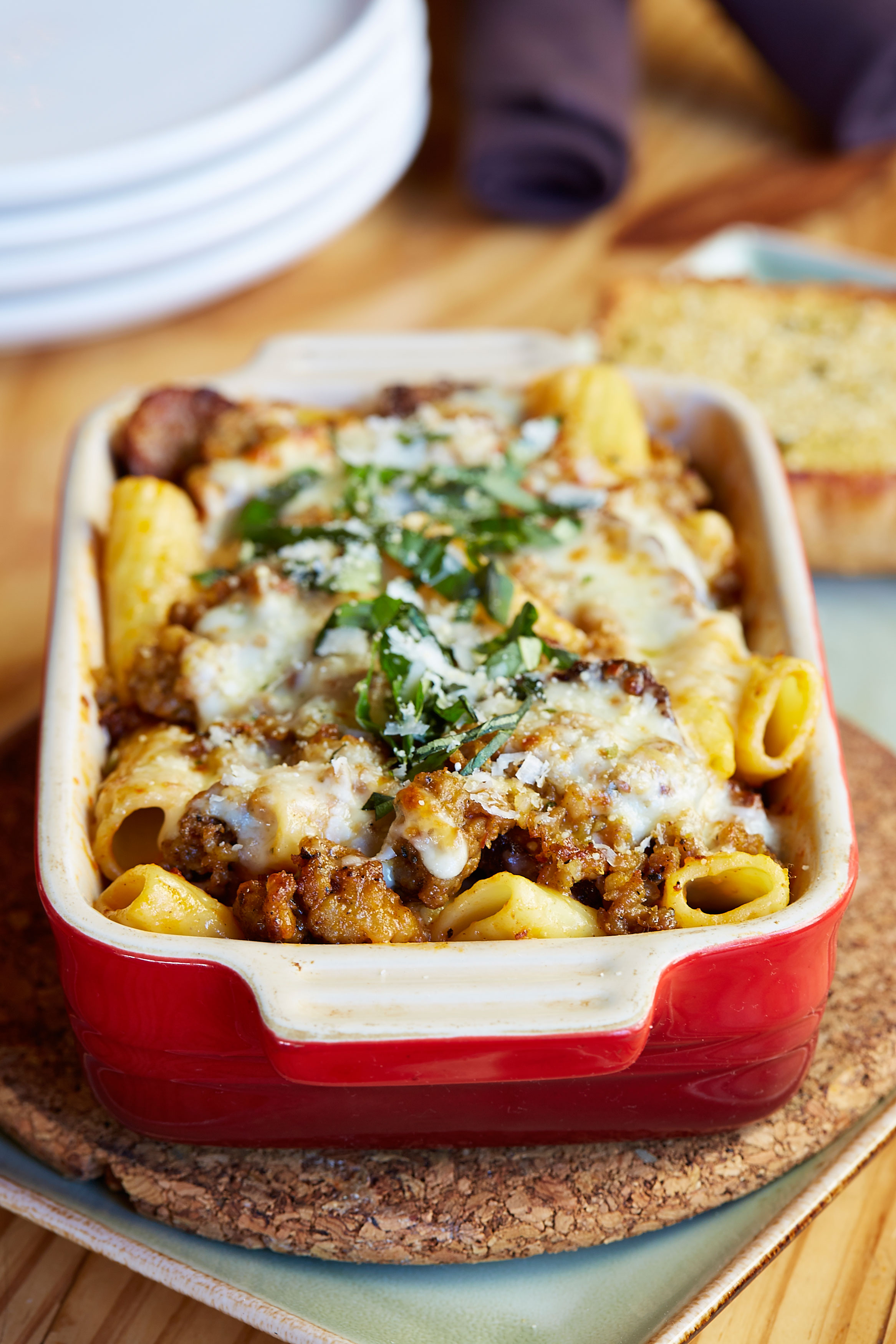 Luscher’s Sausage & Meatball Rigatoni
Taverna Rossa occupies the space vacated by Larry Lavine’s Red’s Patio Grill. It rests between Mi Cocina and Mignon. The back of the restaurant opens to a small lake with a fountain in the center. Lancaster and company reworked the interior and added indoor seating space by glassing in most of the original patio (they open the windows when the weather is nice). The rustic room is warmed by a large, wood-burning fireplace. There is a large bar area in front and a smaller one in back on the enclosed patio. A large wooden stage sits in the middle of the dining room.

For now, it sounds like Lancaster’s making-people-happy business plan is working. I don’t have to call his mother, after all.