It was Saturday night in the Park Cities, and, thankfully, cliched coyotes were in short supply at the Santa Fe-inspired Ocho Kitchen and Cocktails in Preston Center. That is, unless you counted the middle-aged, willowy blonde teetering on black stilettos at the bar. Are coyotes and cougars related? She and her similarly groomed pack—little black dresses, chunky bangles, fresh blowouts—were tossing back tequila cocktails and howling their approval. We passed them cautiously on our way to our table.

Once seated in the sparsely populated dining area, I ordered a cocktail as well. What few people were there provided some entertaining eye candy. In one corner sat a conservatively coifed older couple that looked straight from Strait Lane. Piled into a leather banquette was a preppy party of 10 sharing appetizers and a penchant for canvas deck shoes and tightly cuffed chinos. The aforementioned blonde added two silk shirted gents to her crew and guided them upstairs to Ocho’s adults-only lounge.

The clientele was like an old-money-new-money greatest hits collection. Somewhere owners Brian Black and Ben Crosland had to be smiling. Both grew up in Highland Park and know the demographic well. Preston Center has long been a retail nexus for both the Park Cities and Preston Hollow. More recently, it has become a popular restaurant destination, with chef John Tesar’s Spoon drawing in foodies and the latest location of Nick & Sam’s Grill running a two-hour wait on the weekends. Black wanted in on the action. But only with the right restaurant.

Southwestern cuisine seemed the perfect fit. As a child, Black vacationed in Santa Fe. “There’s a huge contingency of people from Dallas who travel to Santa Fe for vacation,” he says. “Highland Park and Preston Hollow—these are the people who have second homes there. And it’s a corridor that knows chef Eric well.” 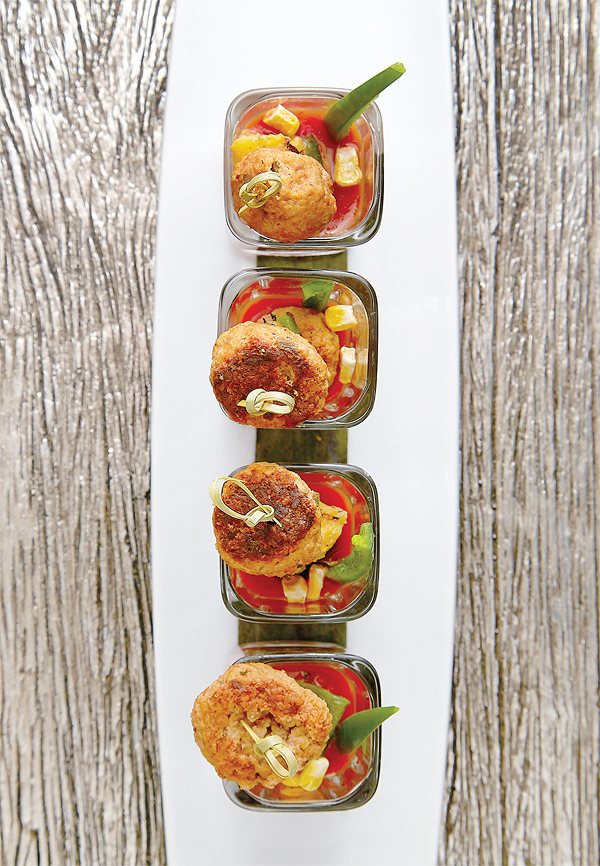 Pork Marble Shooters photography by Kevin Marple
photography by Kevin Marple
The chef that Black refers to is Eric DiStefano of the famed Coyote Cafe and Geronimo restaurants in Santa Fe. Black has been working for four years to open a Southwestern restaurant in Dallas and build on the success he has had with Mi Piaci. A mutual friend introduced him to DiStefano. Coyote Cafe had recently opened a rooftop cantina, and the concept inspired Black with its small plates, premium cocktails, wine by the glass, and a more casual feel than DiStefano’s other restaurants. Thus Ocho was born, albeit with a slight addition to the original recipe: a Southwestern restaurant with a Tex-Mex twist. “Ben has opened Tex-Mex restaurants, chef [and co-owner] Eric  brings his Santa Fe knowledge, and I know the Dallas market and how to serve patrons well,” Black says. “It’s a good mix.”

It’s true. Ben Crosland did open a Tex-Mex restaurant. In 2000. In Chattanooga.

But one sip of a Hatch Chile Smoke cocktail eased my doubts about his Tex-Mex bona fides. Served on the rocks, the blend of El Jimador Reposado tequila, lemon juice, and agave nectar played like a sophisticated margarita with a nice sour-sweet balance and silky mouth feel. Green chile powder added a touch of heat. With such a smart start, I was primed to see what the kitchen had to offer. If only I had stopped at that first drink. After several visits to Ocho, I discovered that what looked tempting on paper rarely lived up to the menu’s promise or DiStefano’s pedigree. The “good mix” was more like a bad combo.

Let’s start with the basics, chips and salsa. If you’re going to serve Tex-Mex dishes, even bastardized versions, you had best get this staple right. Ocho’s roasted tomato and chipotle salsa was tepid and watery, tasting of overly sweet tomatoes and little heat. The avocado tomatillo salsa was inconsistent, bland on one visit and then welcomingly tart on another. Chips were too thick and crunchy. Two other Tex-Mex staples, guacamole and queso, were equally frustrating. A Hatch chile version of classic queso held nice flavor and heat, but the texture was grainy, and bits of chorizo made it greasy. Guacamole was far too creamy and acidic.

The nearby preppy party of 10 shared several orders of Ocho’s shooters—appetizers served in tall shot glasses with four to an order—and seemed to enjoy them. Or perhaps it was the tequila talking. Either way, I ordered some on my next visit. Sure enough, the shooters were a hit. Perfectly fried duck confit taquitos were stuffed with juicy fowl and dunked in a sweet and fiery grilled orange and serrano marmalade. Bite-size marbles of minced pork were skewered with grilled pineapple and poblano, resting in a sweet and spicy sambal sauce, a popular Southeast Asian chile-based condiment. Here were the Asian flavors DiStefano is known for at Geronimo. They appeared again in the jalapeño yuzu lime marinade on a tostada of Mexican white shrimp ceviche.