Jason Maddy is well on his way to becoming the next rock star chef in Dallas. Until now, he has cooked in the shadows of some big names, working as a sous chef under David Bouley at Danube, in Manhattan, and David Bull at the Driskill Hotel, in Austin. John Tesar tagged Maddy as his chef de cuisine at The Rosewood Mansion on Turtle Creek. He stayed on after Bruno Davaillon took over in 2009, leaving two and a half years later to become executive chef at Oak.

Now the 35-year-old finally has the spotlight. Oak opened in the Design District in mid-December. Barely a week later, word began to spread that something special was happening. I got calls from several restaurateurs asking, “Who is this guy?”

It helps that Maddy has recruited a talented staff to support him. Sous chef Brian Zenner’s résumé includes stints at Fenouil and Matchbox Lounge in Portland. Zenner was also a cook at The Mansion under Davaillon. Pastry chef Sarah Green spent three years creating award-winning desserts at The Second Floor in Dallas. The talented trio in the kitchen was assembled by owners Tiffanee and Richard Ellman and general manager Tommy DeAlano (Candleroom, Sunset Lounge, The Dram), who is also a partner and oversees the day-to-day operations. The owners recruited veteran mixologist Abe Bedell from Victor Tangos.

This formidable crew is why weekend reservations are hard to get and walk-ins usually have to wait for a table. But hanging out at Oak is fun. The bar is hopping, and the people-watching is spectacular. The crowd is an eclectic mix of professionals from Uptown and the Design District, folks who live nearby, dates on their way to a show at the Meyerson or a game at the AAC, men in suits, guys in khakis, high rollers, nerdy foodies, and gift-bearing girl groups.

Sitting at the bar gives you some time to soak in the vibrancy of Oak. You can’t help but tap your toes. The bed of contemporary music, a compilation of avant-garde mash-ups and remixes, is easy on the ears of twentysomethings and geezers alike. Just as a disco beat makes you feel like crawling out of your skin, the music softens, and the smooth sound of Adele soothes your nerves. Smartly, they keep the volume low, and the room, with lots of glass and brick, has been fitted with extra speakers and insulation.

The first time I opened the front door, I was knocked out by the interior. The space was designed by Plan B (Royce Ring and Alex Urrunaga), but they worked closely with the Ellmans to create a modern living room where chocolate brown couches replace booths. Once you are seated, you feel like you are in someone’s swanky home. The vibe is sophisticated and sexy. The side walls are original brick and cinder block; the back wall is illuminated by a framed quivering oak tree projected from the ceiling. The warm tones of the beige, taupe, and olive carpet contrast nicely with the light oak tables and the chairs upholstered in putty-gray flannel. Almost all of the furniture was made next door in the Design District.

The food, like the interior design, is simple, clean, global, and elegant. The Ellmans, Maddy, Zenner, and DeAlano have traveled extensively, and each creation is like a culinary postcard from a distant land. The brilliant appetizer of Moroccan octopus and pork jowls was inspired by a dish the Ellmans discovered on their honeymoon in North Africa. Maddy has cooked in Austria, and he presents a stellar version of veal schnitzel with lingonberry and a separate side spaetzle seasoned with nutmeg and Gruyère. A rack of lamb is rubbed with berbere (an exotic spice) and a blend of garlic, cardamom, red pepper, and coriander from Ethiopia. Even the Caesar salad speaks a different language; the dressing is a basil-mint pesto tossed with Ligurian olive oil. 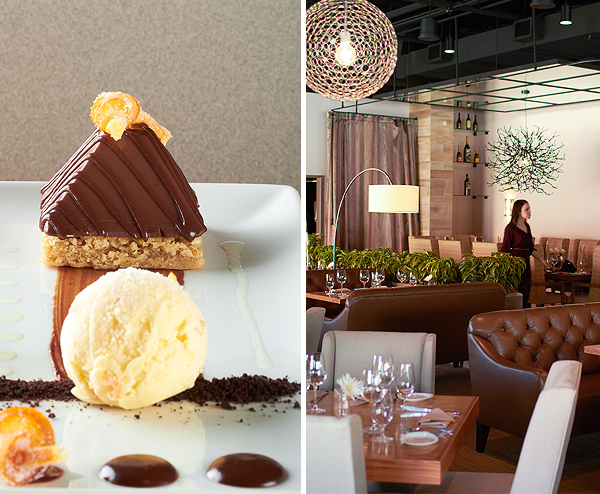 Gianduja chocolate panna cotta; Oak’s interior photography by Kevin Marple
photography by Kevin Marple
But here’s the rub: if you fall in love with an item like the fried celery root rolled in black pepper and rusty Hungarian paprika, you likely won’t find it when you return. Instead, you may have to settle for thick-cut Yukon gold potatoes perfumed with Spanish piquillo and garlic. Over the course of three months, I ate almost every item on the menu. Good luck, though, ordering any of the dishes I describe here. The menu changes constantly.

“Yeah, we change things around a lot,” Maddy says. “It’s fun to work with the kitchen staff. Everybody adds something from their past experiences.”

The kitchen’s exuberance keeps intrepid eaters coming back. If you are willing to roll with their creativity, you will not be disappointed. Unless they decide to do something stupid and remove the organic half-chicken with Oaxacan-style mole from the menu. The dark meat is deboned, pounded out, covered with a layer of fresh masa, folded, vacuum sealed, and cooked sous-vide style. The moment you slice into the moist meat, a mist of masa stimulates your senses. The generous portion of chicken is garnished with a splash of rich mole, a few crumbles of queso fresco, and a delicate “dumpling” of summer squash. Given time, this stunning concoction could become as iconic a Dallas dish as The Mansion’s tortilla soup and Stephan Pyles’ cowboy rib-eye with red-chile-dusted onion rings.

You can find a beet, arugula, and goat cheese salad at almost every upscale restaurant in town. To satiate your newfound love of beets, Maddy and company created an artistic “composition of beets.” A rectangular slice of golden beet terrine, with a layer of horseradish-spiked creme fraiche, is placed in the center of a long, white plate and garnished with whole garnet-red beets. A line of Styrian pumpkin-seed oil is drizzled across the dish, which is finished off with toasted pumpkin seeds. The earthy flavor of the beet meets the coolness of the cheese before it knocks up against a pungent flash of horseradish and the crunch of a seed. It’s a brilliant contrast of textures and tastes.

Like the beet salad, the honeymoon-inspired pork jowls and octopus is also a unique blend of textures, flavors, and colors. Baby octopus is sautéed and served beside bites of crispy-skinned pork jowl, finely diced Granny Smith apple, and thinly shaved slices of watermelon radish. Two sauces line the plate: a spicy Peruvian aji panca paste and a refreshing, dark-green cilantro sauce. I put a forkful in my mouth and closed my eyes for 60 seconds. The essence of blueberry, smoke, sweet jam, and tart apple mingled with sharp pieces of pork skin and salty octopus.

Several other masterpieces I discovered included a skillful yet simple preparation of pan-seared wild halibut served with a scoop of dense romesco sauce of pine nuts, almonds, and a light, smoky touch from a pinch of ancho chile. A dramatic swirl of grilled Texas asparagus purée surrounded the fish.

Duck and lamb also received royal treatment. Medallions of rosy red roasted duck breast are complemented by a rich foie gras flan and a whole prune that is marinated in Armagnac. Lamb loin is sliced, set atop a few spoonfuls of tzatziki, and sauced with a lamb jus teeming with diced bits of lamb sweetbreads.

What I expected to be a straightforward “Dallas special” filet turned out to be pure Parisian. The steak, vacuum sealed and slow cooked with thyme and butter, is finished on the grill. The 7-ounce steak is served with brown butter whipped potatoes, trumpet mushrooms, and topped with a dab of bone marrow, which is also the backbeat of the accompanying bordelaise sauce.

The filet ($32) is the most expensive item on the menu. Oak manages to turn out upscale cuisine at below white-tablecloth dining prices. The other entrées run from $18 to $28. The portions are smaller but certainly don’t leave you wanting. That is, unless you are jonesing for something sweet. 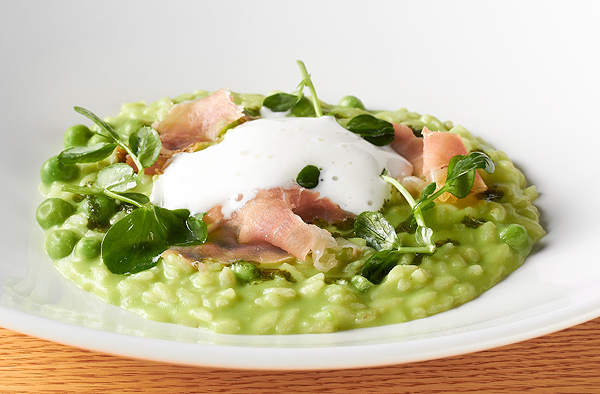 Spring pea risotto with citrus foam photography by Kevin Marple
photography by Kevin Marple
I hope pastry chef Sarah Green is ready for her close-up. She has matched Maddy’s cutting-edge style with a short list of high-concept desserts. Her dramatic presentation of gianduja panna cotta looks like it was inspired by the opening scene of Raiders of the Lost Ark. A huge boulder of Patrón orange ice cream is precariously perched on a pile of chocolate dirt (crushed chocolate cake) at one end of the long plate. A tower of chocolate hazelnut panna cotta on top of a thick hazelnut blondie rises at the other end. They are separated by a long dash of chocolate. I was tempted to pick up the ice cream end and roll it toward the chocolate temple. Despite the theatrical staging, the soft chocolate and hazelnut panna cotta and the crunchy hazelnut blondie, a brownie without chocolate, would have been a delight by themselves. Green didn’t trick up the carrot cake bread pudding. The warm round cake is served with superb cream cheese ice cream, walnuts, and rum-soaked raisins, and topped with crispy carrot strings.

Subtle personal touches make Oak special. The service is well-mannered and efficient. After each course is served, someone approaches the table and explains each dish. As the plates are cleared, it isn’t uncommon to hear “Pardon my reach” or “You are very welcome.”
The wine list reads like a collector’s diary. It’s not only personal, it’s well-considered and priced to sell. There are a number of run-of-the-mill wines (Conundrum, $52, and Louis Jadot Mâcon-Villages, $48), but these are balanced with a curated roster of less-recognized wines (Inwood Estates Tempranillo, $72, and Jermann Pinot Grigio, $52). There are several wines that are classics for their style (Grgich Hills Zinfandel, $81, and Sequoia Grove Cabernet Sauvignon, $80).

Go early and stay late. You might get a chance to meet chef Maddy. He’s the handsome face in the starched white chef jacket peeking out from the kitchen. If you hurry, you can say that you met him before he became famous.