Lulled by the scent of smoke, a circle of people huddles around a hunk of charred meat, agog. It’s a mighty beef shin, the bone jutting up amid blackened chunks of flesh, a carnivore’s feast heaped on a slab of wood. A maiden steps into the circle. Her name is Tiffany, and she wants to know if you need an extra napkin.

At Woodshed Smokehouse, the new restaurant on the banks of the Trinity River in Fort Worth, celebrity chef Tim Love drags us back to our caveman days, invoking our primordial fascination with burning things. Everything is cooked via fire or smoke—no electricity, no stove-top braising—and the menu includes an “animal of the day.” It even goes so far as to identify menu items by the kind of wood used in their cooking: mesquite, hickory, oak, or pecan.

This little Quest for Fire excursion can feel like a paradox coming from Love, the media-savvy darling of the Food Network, wearer of the Prada blazer, and early adopter of social media like Twitter. Some of it seems little more than shtick, not unlike the cowboy hat he dons when he’s in the kitchen at Lonesome Dove, his Western-chic restaurant in the Stockyards. Could most diners tell whether their fish was smoked over oak versus pecan? Probably not. But when the culinary sparks at Woodshed fly, it results in some satisfyingly smoky food, fulfilling the “global barbecue” concept that Love envisions. And the relaxed, engaging ambience makes for a dining experience that’s truly communal.

A window into the kitchen, across from the hostess stand, establishes immediately that this is something different and fierce. That’s where you see it on display: a whole animal—boar, goat, venison—slowly rotating on a spit. Savage and medieval, the spit reflects Woodshed’s canny penchant for embodying au courant trends while at the same time pushing them forward. Roasting a whole pig has become a rite of passage for the hipster chef and backyard gourmand, just as killing one yourself was a foodie thing to do a few years ago.

It’s the latest step on the journey of conscious dining, graduating from mindless stuffing of your face to Anthony Bourdain-level obsession. For a certain faction of foodie, eating what you’ve slain yourself is a badge of honor. From there it’s on to roasting the entire animal, under the guise that you will be consuming all parts, right down to the hooves and eyeballs. Boneless chicken breast and tenderloin of filet are for wimps.

If you come with a group of friends, you can split the beef shin, $75 for four, served with a bowl of soupy borracha beans, kale salad, chunks of ricotta cheese, and a stack of house-made tortillas. You pull off shaggy bits of the beef and wrap them in tortillas—no forks required. Beef shin tends to be moist, and this one is no different. As a novelty, it’s fun to share. But ordering it feels like a waste, given the bounty of other, more interesting items on the menu.

Nearly everything comes in small sizes, priced modestly so you can mix and match. Pair up a couple of items for a meal, or share with your tablemate. There are salads, cool ethnic items, sandwiches, and finger foods like smoked olives and smoked almonds.

There’s a sausage of the day, served with a neat mustard for dipping. It could be elk, pork, maybe rattlesnake. On our visit, it was rabbit, cut into coins, nicely spiced, with a fine texture and still-crackly skin. We shared a plate of red piquillo peppers stuffed with brisket, so round and merry that they seemed to be smiling.

“Fancy mushrooms” with polenta didn’t sound like much, but it turned out to be a bowl of comfort food that everyone at the table wanted. The mushrooms, a mixed assortment, were roasted with thick slices of jalapeño until intense, with a salty brown jus that stained the pale, soft polenta, leaving pockets of dark, concentrated flavor. There was something satisfying about scooping up a spoon of the polenta with a ribbon of the mushroom jus. Propped on top was a sunny-side egg, its yolk begging to be speared—savagely, of course—to ooze over the bowl and add a note of luxury.

Smoked redfish en papillote also had a description that didn’t do it justice. The fish fillet was wrapped in parchment paper with herbs, then smoked over oak. The young server brought it to the table still enclosed in its wrapper. It was a smart touch, because, when we poked it open, we got to inhale the potent aroma of herbs and spices, including mint and salt. Cooked in its own juice, the fish was flaky and so moist that you got a sense of richness despite its lack of oil.

And there were incredible vegetables, the stealthy little surprise at what poses as a temple of meat. An acorn squash, cut into wedges, was baked until golden, so soft you could eat it with a spoon. It came drizzled with a glossy brown sugar sauce jacked up with Tuaca, the Italian liqueur that is Love’s go-to spirit (he did Tuaca shots on Iron Chef America). 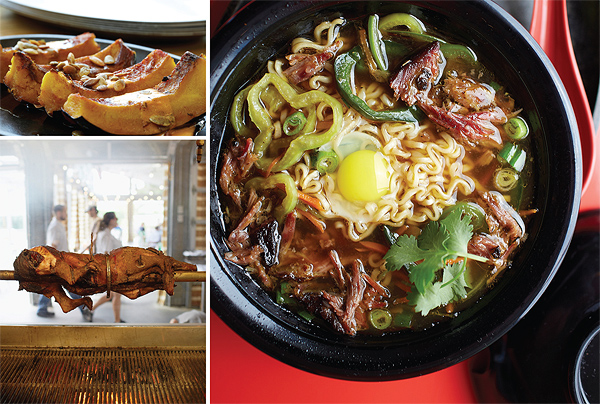 (clockwise from top left) Roasted acorn squash; ramen; pig on a spit photography by Kevin Marple
photography by Kevin Marple
Grilled broccolini, broccoli’s willowy cousin, came on an oval silver platter, the floret tops blackened in some spots and the bright green stems still firm but on the verge of tenderness. Sprinkled on top were discs of sliced garlic, fried until brown and crackly. If you didn’t know better, you might mistake them for bacon bits.

Of course, Love would do kale salad, that most trendy of 2012 dishes, with three kinds of the curly vegetable—purple, red, and deep green lacinato. He jazzes it up with pumpkin seeds, thick shavings of Manchego cheese, and chunks of ruddy, spicy-hot guanciale.

The menu’s underground favorite is the whole head of cauliflower, smoked. Love treats it as if it were a cut of meat, smoking it for six hours with olive oil, lemon, and chili de arbor until it caves and softens. It was served in big, soft, spicy florets. Where else would you see a table full of diners fighting over cauliflower?

The other surprise is Woodshed’s collection of ethnic dishes, but it follows Love’s pattern of embracing culinary trends just as they’re breaking. That includes a Vietnamese banh mi, a hot foodie thing these days. Woodshed’s was unfortunately deconstructed. Pulled pork and pickled vegetables were piled in a roll-it-yourself heap, with tortillas standing in for the classic French baguette. But the ramen noodles were fantastic: a steaming bowl of broth, delivered to the table with a dome on top. The bowl contained wavy noodles, pulled pork,
julienned carrot and bell pepper, chiles, and a poached quail egg to enrich the clean, austere broth.

Skip the house-made tortillas and camp bread with “pit master fat.” The idea of recycling drippings is clever, but there weren’t enough tortillas, and the camp bread was like stale pita. It also gets you to pay for bread, an item ordinarily provided for free. (True, it’s only $4, but still.) Smoked artichokes were another shared snack that sounded cool, but the individual artichoke leaves were a little bit like singed paper.

The best of the snacks were the unspectacular-sounding crispy potatoes with smoked garlic aioli. Cut into bite-size chunks with skins still on, the potatoes looked like something you could do at home. But their smoky, garlicky flavor would be hard to re-create, as would their satisfying contrast in texture, with a crisp shell encasing an almost creamy flesh.

But enough about vegetables. Let’s get back to the animal on the spit. It gives an edgy nudge to what otherwise might be simply a frat-boy milieu. TCU students hang out at the bar, dawdling over drinks, squatting as long as they can. On the patio, postgrads cluster around picnic tables, keeping one lazy eye on the kids. The dining room is for the elders. That so many groups share an equal desire to hang under the same roof reveals Woodshed’s broad appeal. The juniors get to feel sophisticated, and the oldsters feel hip. Everybody wins.

Decor is rustic-modern with shiny corrugated metal walls and stacks of chopped wood, their laser-perfect edges looking more like art installation than fodder for the fire. A whimsical sculpture of a cow sits on the patio, where the river serves as backdrop. It’s not such a leap to imagine yourself on the edge of the Hill Country, spending an afternoon on the Guadalupe. Sunburned and toasty, you look for a place with beer, grub, a patio, and a band playing. Woodshed has it all.