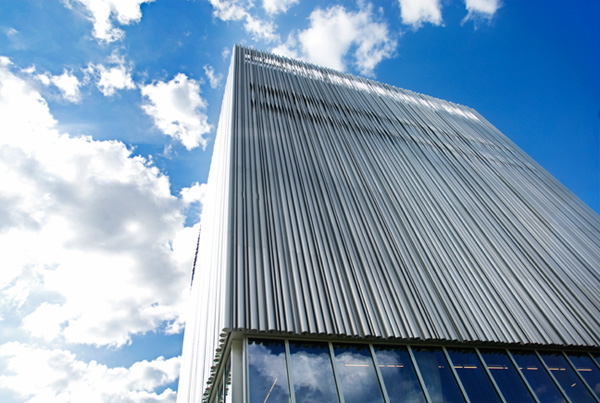 GRAY OF THE WYLY: Architect Prince-Ramus says of the raw lobby: “It’s the expression of the foundation. That said, the reality is, most architects love concrete.” photography by Elizabeth Lavin
photography by Elizabeth Lavin
It’s an attractive notion, a way to begin making Uptown and downtown feel like one large urban district. But several people suggested to me that what’s scheduled to open in 2011 will be the local equivalent of Millennium Park in Chicago. Not likely, since that capped railway yard is hemmed tight by blocks far denser than any in Dallas, with the added bonus of a lakefront on one side. And if Woodall Rodgers does become what the project website describes as an “urban oasis” of “professionals enjoying lunch, friends taking in a movie on an outdoor screen, or couples enjoying a relaxing stroll,” isn’t that the same bright scenario sketched for Sammons Park enfolding the Wyly and the Winspear? (Another heretical thought: how much park does one city need?)

Still, I saw plenty of examples of Dallas growing right, an almost organic threading of housing and commerce amid the flamboyance of the past. One Arts Plaza at the east end of Flora Street isn’t great architecture, but it gets the basics right—stepping low at Routh Street to ring an auto courtyard with restaurants and outdoor seating. Another nice touch: the condominiums that occupy the top seven of the slab’s 24 stories are visually distinct, with balconies scooped into the façade. You can imagine perching in one at the end of the day, a cool drink close by.

In downtown’s core, meanwhile, the future lies in such recently completed projects as Mercantile Place—an apartment complex that pairs the restoration of the sentimental 31-story landmark tower from 1942, spire on top and all, with a new and cleanly modern 15-story companion. Designed by BGO Architects for Forest City Enterprises, the project brings new and old together in a single airy lobby marked on the street by copper-panel accents that continue across the top of the new building’s storefronts. With time, the storefronts should fill; for now, there’s action around the elevated pool that helps nudge renters to sign a full-year lease. Again, the block won’t make the cover of Architectural Record. But it’s a smart way to grow.

That’s how cities are mended: piece by piece, swatch by swatch. Fill in the blanks with style and deference. When the Next Big Thing has come and gone, like the banks that originally inhabited all those granite-flaunting towers, good urbanism will remain.

“What’s fascinating is that downtown Dallas now has all these institutions in place,” Mayne says. “They’re waiting for the city.”

===That’s how cities are mended: piece by piece, swatch by swatch. Fill in the blanks with style and difference. “What’s fascinating is that downtown Dallas now has all these institutions in place,” says architect Thom Mayne. “They’re waiting for the city.”!==

While they wait, the Pritzker four offer something that is unique to Dallas: a remarkably concentrated do-it-yourself seminar on what makes the best architecture endure. The contemporary forms might put off visitors left cold by anything edgier than the SMU Campus, but each building shows how architecture can resonate beyond opening night, tapping all of your senses.

At the Meyerson, the lobby with its commanding scale and smooth luxury is meant to be dazzling, a sanctuary of high culture. But after you ascend the staircase and enter the performance hall, a brush with the handrail brings a delicate surprise: the railing is sheathed in thin velvet. Aloof becomes intimate.

There’s a similar encounter at the Wyly. The staircase past the dour lobby is dark but also exotic with the chain metal mesh that covers the walls. Better yet, the mesh is waiting to be tugged. Give it a pull, and it scrimps out, to be rearranged night after night in an infinite number of ways. It’s as malleable as the performance hall supposedly will be, but playful as well. 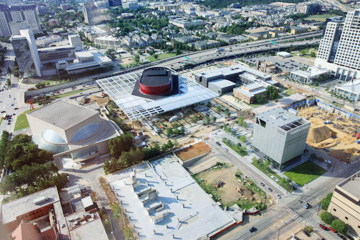 FROM THE GLOBE TO THE CUBE: Prince-Ramus conceived of the Wyly as a radical new way to present theater. What was once backstage now sits above it. photography by Mark McWilliams
photography by Mark McWilliams
The Meyerson opened at the height of Pei’s career, the same year as his addition to the Louvre in Paris, and it has all the ease of a veteran who had mastered his own brand of geometric modernism. Prince-Ramus, by contrast, has much to prove. His building wants to score points, not sum up.

One structure is assured, imperial yet relaxed. The other is crammed tight with ideas and twists. Some are spot on, such as the chain mesh. Others went askew—as on the ninth-floor outdoor terrace, where the idea was to cloak the floor, walls, and ceiling with artificial turf. Building inspectors let the flooring stay; the rest has been replaced by a green fire-resistant fiberglass.

This call-and-response doesn’t stop at the district’s borders. The Wyly’s tight curtain of vertical tubing evokes, consciously or not, the thinly spaced mullions of the Federal Reserve Bank just north of Woodall Rodgers, on Pearl Street, a handsome 17-story tower from 1992 designed by Kohn Pederson Fox. The Winspear canopy cuts even farther into the city, a large-scale tribute to the ad hoc urbanism you find in a neighborhood like Oak Cliff, where diners are being reborn as watering holes, the open-sided shelters that once shaded autos now used to create open-air lanais, Texas style.

Or you can leave it all behind and retreat to the Nasher, an exquisite case study of how in the best buildings, no detail is left to chance. The shiny trunks of the crepe myrtles along Flora Street offer far more beguiling views inside than if Peter Walker had gone with the cypress of the Sasaki plan. The eroded surfaces of the water-blasted travertine—as haphazardly nuanced as a topographical map—are more alluring than all of downtown’s marble lobbies combined. The spare weave of cables that holds the bowed ceilings in place is as artistic as some of the sculptures on display.

Even the vents in the floor reward a second look. Instead of being interrupted by metal grills, the oak-plank floor smoothly flows across each vent, sliced as needed to circulate air. Which brings to mind those ghostly screened windows at the Wyly, now that I come to think of it.
Architecture can’t save the world. It can’t turn a city around. But it can teach you to view the world and the city with fresher, sharper eyes. And in that respect, here, Dallas is blessed.

John King is the San Francisco Chronicle’s urban design writer and two-time finalist for the Pritzker Prize in Criticism. He was born in Dallas.