Architecture can do many things: provide shelter, scrape the sky, make you smile, and make you cringe. It’s the most public art form, the only one we can’t avoid. But architecture can’t perform acts of urban resurrection all alone. Nor can it change the course of history—not even when the buildings are designed by celebrity architects.

Which brings us to the Arts District: 19 blocks, 68 acres, and, as of October 12, home to four cultural facilities designed by winners of the vaunted Pritzker Architecture Prize. Each building in the quartet is genuinely important as a work of architecture, make no mistake, and the two about to open are innovative and ambitious. Even their shortcomings pay dividends, revealing strengths in their predecessors that were easy to take for granted or overlook without the ability to compare and contrast.

These days, though, more is expected of such big-deal debuts as the Dee and Charles Wyly Theatre, billed to Dutch provocateur Rem Koolhaas, though primarily designed by his protégé Joshua Prince-Ramus. Or the Margot and Bill Winspear Opera House, designed by Foster + Partners, a firm led by Lord Norman Foster of London. It’s not enough to deliver the structural goods—resonant sound in the case of the Winspear, flexible performance space at the Wyly. The goal is to deliver an Icon.

That means something to generate buzz far beyond Plano or Fort Worth. Step one: starchitects come to town. Step two: the world takes notice. Outsiders—such as yours truly—proclaim that downtown Dallas is finally, firmly On the Map.

Don’t take my word for it. The press kit from the Dallas Convention & Visitors Bureau confides how “journalists and visitors alike are flocking to the city” that “exemplifies world-class architecture.” The Dallas Center for the Performing Arts, which will operate the Winspear and the Wyly, calls itself “the most significant new performing arts center since New York City’s Lincoln Center.”

Such hyperbole is par for the course in the district, which has been on the drawing boards since 1977. When the Morton H. Meyerson Symphony Center finally opened in 1989, such a fuss was made locally about the regal limestone box by 1983 Pritzker winner I.M. Pei that one visiting architecture critic began his (favorable) review by taking condescending note of “This city’s latest attempt to assert a cultural presence of international stature.” Fourteen years later, the Nasher Sculpture Center, by Renzo Piano (Pritzker ’98), transfixed the Dallas Morning News editorial page. In those well-lit galleries and tree-shrouded gardens, the writer gleaned a spark “that could transform the world’s opinion of Dallas” and do what “the Guggenheim Museum [did] for Bilbao, Spain.”

Flash forward to 2009, and here’s a reality check: lightning is not about to strike. If you’re looking for a convenient place to explore a range of contemporary architecture, what stands along Flora Street is an intellectual treat. But an arts district does not a city make—especially an arts district trying hard to be anything but the city around it.

It’s too early for a full verdict on the Winspear and the Wyly. Opening night for projects of this sort tend to serve as dress rehearsals, prods to get the big things done while the loose ends are tied up later (at the Meyerson, now so regally assured, I’m told that workers were screwing in chairs the afternoon of the gala premiere, and faux-marble paint covered for stone that hadn’t arrived from Italian quarries). The all-important landscape around the two buildings, the 10-acre Elaine D. and Charles A. Sammons Park, designed by Michel Desvigne of Paris (in collaboration with JJR of Chicago), will barely have taken root—and the plantings were installed during the least hospitable months of the year. But the main moves are in place, the strokes used by each architectural team to try to make its mark on the city.

The drum-shaped sphere of the Winspear offers nighttime drama along Woodall Rodgers Freeway, 105 feet high and clad in vivid red glass, the luminous orb surrounded by a flat metal canopy that stabs out to shade 3 acres around the hall while scalloped blades deflect the sun. The Wyly strikes a much different pose. It could be a silvery glacier on stilts, a compact box with a tight skin of ribbed aluminum except at ground level, where the first 32 of the building’s 132 feet are clad in clear glass and vertical steel mullions.

One newcomer reaches out for attention; the other has a frosty aloofness that dares you to look. The Winspear beckons the public from Flora Street with a glass-clad lobby through which glows that red sphere, amid an urbane realm of lawns, oak trees, and a reflecting pool. The Wyly requires you to descend a ski-slope-steep concrete incline to a lobby with floors of gray concrete, walls of gray concrete and dull aluminum, and light provided by fluorescent tubes hanging like austere icicles. The Crescent it ain’t.

Yet the Wyly likely will receive the most scrutiny from afar, since it is one of the few American building associated with Koolhaas and his Office for Metropolitan Architecture. The theater credits split Koolhaas’ billing  with Joshua Prince-Ramus and his firm REX (formerly OMA New York). But Prince-Ramus himself is considered a prospect to watch by the architectural intelligentsia—can the prince upstage the 2000 Pritzker winner?—and that’s part of the hook.

Prince-Ramus describes the genesis of the Wyly’s design in almost clinical terms. “Your best strategy is to create a significant performance as opposed to a significant form,” he says. “A lot of our work centers around the notion that if you focus on ushering forward a process, pushing the limits, you often will come to a conclusion that will transcend.” 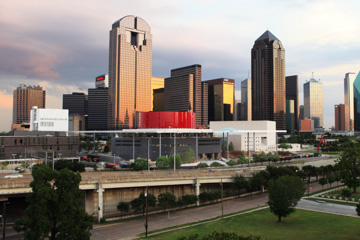 Woodall Rodgers Freeway looks drab next to its shiny new neighbors. photography by Scott Womack
photography by Scott Womack
With the Wyly, this means striving for a performance space where the relationship between audience and stage can shift from show to show, even act to act. The floor seating can level off or rise in tiers at the push of a button; the three levels of balconies on three sides can move forward or back or disappear, lifted into the rafters using technology devised to adjust stadium scoreboards. Black-out shades will keep light from filtering through the glass walls during a performance—but they can also be raised, so that the stage and the city appear as one.

To follow through on such a vision, Koolhaas and Prince-Ramus took the “obvious” next step: they moved the hall’s back-of-stage elements up and out of the way. There are no windows in the lower portion of the aluminum cube because that’s where the fly spaces are located. Above them, you’ll find the rehearsal hall, the costume shop, and offices.

“The fact that the building is vertical is in total deference to our effort to return the ground plane to something that is malleable,” Prince-Ramus says. “Imagine the last act of Hamlet with the curtains opened to force viewers to confront the play’s relevance to our lives.”

If the past is any guide, the intelligentsia will embrace the Wyly as a symbol of a new century’s need for convention-defying design. When OMA’s Seattle Central Library opened in 2004, then New York Times architecture critic Herbert Muschamp anointed it as “an urban montage of starburst images” in which “social, technical, and psychological goals are fused into form.” One year later, OMA’s Casa da Musica debuted in Portugal, and Muschamp successor Nicolai Ouroussoff crossed the Atlantic to herald “a rationally ordered environment animated by the chaotic social and psychic forces whirling around it.”

In the long run, though, cultural theory is less important than construction and craft, and the Wyly’s deliberate rough edges might wear on patrons who might prefer a bit of pomp.

Cross Flora Street and compare the Wyly to the Meyerson. The lobby of the Meyerson is all about uplift and space, elegant poise. The lines are modern—Pei isn’t one for fussy finishes—but the materials glow, from the warm marble walls to the glamorous staircase that ascends with magisterial sweep. When you arrive, you’ve arrived.

The Wyly does the opposite, pushing down and in, monochromatic and raw. Unless patrons have intervened since my visit, you’ll see spots where metal panels don’t line up precisely with the concrete alongside them (“The architects like the roughness,” my guide said a little sheepishly). And the “grand staircase” here has the feel of entering an attic, tight and dark with the walls clad in chain metal mesh attached to magnetic wallpaper.

None of this is by chance. “By definition, if you don’t want the lobby to impose on the malleability, it has to go beneath the chamber [performance hall],” Prince-Ramus says. But it’s also an artistic conceit, a pretense that there’s no need to put on airs. The floor of the performance hall may be plastic-like polyboard, for instance, easily drilled through or replaced, but those are expensive hydraulic levers under the ground-floor seating.

And the heaviness of the lobby? “It’s the expression of a foundation, the under-area of a building,” Prince-Ramus says. A pause. “That said, the reality is, most architects love concrete.”