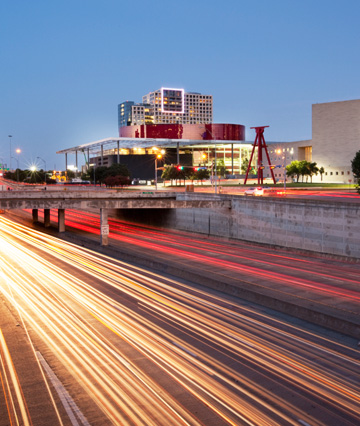 Foster’s forte is high-tech sheen, of the moment but timelessly suave. There’s no better recent example than the 1999 Pritzker laureate’s renovated National Portrait Gallery in Washington, D.C., where the 28,000-square-foot courtyard in the center of the 1836 landmark now is topped by a rippling roof of glass set within a net-like grid. It’s as if a gauzy veil floated into place.

The Winspear doesn’t have the serendipity of that courtyard, or of Foster’s Hearst Tower in New York, with its diagonal trussed form that ascends from a historic stone building with an air of nonchalance. In Dallas, the drama comes from the emphatic canopy, staking out the opera house’s prominence on the scene while also extending an invitation to passersby—an invitation that as planned will include a cafe open during weekdays and accessible through a portion of the lobby where a 70-foot stretch of the glass wall will slide open on nice days.

“We wanted to make sure we designed a building that really said it was public,” says James McGrath, a Foster partner who spent three years in Houston working from the office of Kendall/Heaton, the architect of record for both the Winspear and Wyly. “Not everyone goes to the opera, but lots of people will be in the Arts District.”

In an ideal world, the louvers within the canopy would fully shadow the plaza beneath; to cut costs, alas, “every louver we didn’t need to shade the lobby, we took out,” McGrath says. More conventional trappings fell victim to budget as well: the planks cloaking the underside of the lobby’s zigzagging staircase landings wear white plaster rather than stainless steel. Outside, the dark wall wrapping the rear of the orb is clad in fiberglass-reinforced concrete, the sort of material you’d expect to find in a suburban office park rather than the Arts District.

But these are details for architecture critics to pick at. What opera-goers will notice is the sleek grandeur of the lobby. While staircases slice from one level to the next, the red drum visible from Woodall Rodgers swirls down into the action, with the walls and ceilings of the circulation corridors that punctuate it painted the same sumptuous red. Add 2,200 patrons dressed to impress, and the effect on a good night should resemble a velvet boudoir.

Without resorting to high-culture kitsch, these are operatic moves. “We want it to be eye-catching,” McGrath says of the Winspear. “The red drum helps it stand out. It can’t be mistaken for a commercial or institutional building.”

No danger of that. The drum has the richness of a neon-infused gel, an effect created by scrunching thin layers of heart-red vinyl between two planes of glass. That vibrancy makes it far more arresting on repeat viewings than, say, the swelled-chest prow of the 15-story Hunt Oil Tower five blocks to the west, just outside the district.

At the Wyly, we’ll ignore the metaphorical notion that aluminum tubes in their six different widths evoke a stage curtain. The icy purity of the form is what’s compelling, especially when the tubes thin out ever so slightly across the upper-floor windows of the theater’s costume shop and offices, adding a ghostly sheen.

===The Winspear’s Red Drum visible from Woodall Rodgers swirls down into the action, with the walls and ceilings of the circulation corridors painted a sumptuous red. Add 2,200 patrons dressed to impress and the effect should resemble a velvet boudoir.!==

So far, so good. but to be a catalytic icon—Bilbao’s Guggenheim or the mesmerizing new High Line in New York City, with its 10-block-long promenade above the Meatpacking District on a long-abandoned rail line—a building or intervention needs to be so powerful that it changes your take on everything around it. And despite the infusion of architectural stars, what’s memorable about downtown Dallas isn’t the Pritzker Four. It’s the impression made by the towers in the air and the parking lots on the ground.

Every time I walked from the Magnolia hotel north to Flora Street, there to immerse myself in “the largest urban arts district in the United States” (thank you, Convention & Visitors Bureau), I chose a slightly different route. But the sights were always the same: neck-craning bids for attention, prairies of asphalt with spaces on hire for $5 a day (or less), and lushly planted plazas, their extravagant fountains often putting on a show for me and me alone. Inside the Arts District, the coherent neighborhood shown on a map dissolved into clutter and contradictions.

Certainly that’s the case at Flora and Pearl streets, the intersection that, theoretically, marks the center of the district. On one side stands the Meyerson’s slightly aloof hulk, including a billboard-scaled stone arch that frames the entrance not only to the lobby but also a plaza with abstract sculptures. Off in the distance, to the west, there’s the line of magnolia trees that shrouds the low side wall of the Nasher Sculpture Center and, a block beyond that, the Flora Street entrance to the Dallas Museum of Art.

But to admire the horizon, I need to ignore the other three corners of the intersection: a full block of parking and mostly windowless backsides of a service building for the Cathedral Santuario de Guadalupe and the extension to the Belo Mansion. Then there’s Pearl Street itself: six lanes of asphalt made wider still by turning lanes and a parking garage exit and a median. There are tollways more intimate than this. 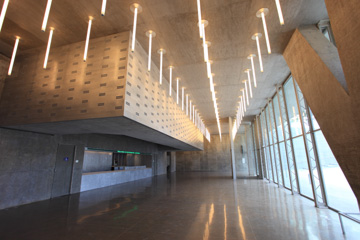 GRAY OF THE WYLY: Architect Prince-Ramus says of the raw lobby: "It’s the expression of the foundation. That said, the reality is, most architects love concrete." photography by Scott Womack
photography by Scott Womack
As planned, Flora Street ties the district together and is keyed to pedestrian scale. The 1983 landscape design by Sasaki Associates includes paving stones, double rows of cypress trees, and circular bollards that are granite on one side and concrete on the other. The dream was “a great street in the European tradition,” to quote one Sasaki planner at the time. Maybe that’s why it feels like an attractive but alien streetscape—in Dallas but not of it.

It’s hard to imagine the new cultural facilities giving Dallas an image makeover, luring urban hipsters to check out the action in—the convention bureau again—“a dynamic cultural destination that is unparalleled in the world.” Nor will middle American families make vacation plans because the Center for the Performing Arts boasts that Dallas is “the only city in the world with buildings designed by four Pritzker prize-winning architects in one contiguous block” (Pearl Street is a mirage?).

Buildings become icons when, by their presence, they redefine the norm, whether as a catalyst or a culmination. But Flora Street and the cultural facilities along it don’t embody any quintessential trait that says “Dallas” to an outsider (at least not this one), the way the High Line unfurls a surreal green perch from which to exult in Manhattan’s layered drama. Nor is it the exuberant counterpoint, the way the Bilbao Guggenheim erupts from an aged city with swirls of titanium that reflect the bay on the other side.

Here’s what the Arts District is instead: a major piece of a puzzle that won’t be finished anytime soon. And that’s okay.

If you doubt me, ask Dallas’ Pritzker star-in-waiting: Thom Mayne, who received the award in 2005 and whose firm Morphosis is designing the Museum of Nature & Science’s new home in Victory Park. “There’s been some discussion about architects remaking cities, and it’s way overstated. We’re much more modest about our aspirations,” says Mayne, who’s based in Santa Monica, outside Los Angeles, a city with a daunting downtown to-do list of its own. “Cultural institutions represent one of the earliest stages of a city moving toward a form that is more cosmopolitan or urban, in the traditional sense.”

At the very least, residents of Dallas and North Texas have a concentrated dollop of the arts to enjoy. The Meyerson is regarded as one of the finest halls in America to hear classical music, and the efforts at the Winspear by Foster + Partners and its acoustician, the London firm Sound Space Design, aim to follow close behind. If the dexterous staging of the Wyly lives up to creators’ hopes, the facility could influence theater design in the decade to come.

There’s also the Dallas Museum of Art from 1984, designed by Edward Larrabee Barnes and the first cultural institution to put down roots in the district. No Pritzker is attached—though Barnes did receive a posthumous Gold Medal from the American Institute of Architects in 2007—and the exterior is glum, with walls of limestone that manage to look like concrete. Inside, though, the galleries offer an orderly procession of treats.

And then there’s the Nasher, architecturally the most sublime building in the Arts District—not just for Piano’s spare design (five thick lines of creamy travertine, clear glass walls between them, topped by gently bowed skylit glass, and that’s about it), but also the choreographed landscape by Peter Walker & Partners of Berkeley, California. It transports you from downtown Dallas into some deceptively natural retreat, a spell only enhanced by the works of such sculptural masters as Richard Serra and Jonathan Borofsky.

The fact that none of this happened exactly as hoped back in 1977 doesn’t matter. Because as Mayne says, cities evolve. Downtown Dallas has a long way to go, and the mistakes of the past aren’t easily healed (how much parking does one city need?). There’s a disturbing tendency to keep pursuing the next big fix, the intervention that will change things once and for all.

The closest example at hand lies directly north of the Arts District, where Woodall Rodgers Park will cap the freeway between Pearl and St. Paul streets with 5 acres of public open space.