Stacey Alcala is slender, energetic, and glowing with enthusiasm. The Frisco mother of two is a dancer, and she exercises three to five times a week. She watches her diet. She’s careful not to consume too much salt or fat, and she regularly eats organic food.

She looks, according to all outward appearances, like a healthy person. But on February 8, at the age of 29, Alcala suffered a major heart attack. The vessels of her heart collapsed—something called a spontaneous coronary artery dissection. It’s a rare, usually fatal, condition.

Alcala was at a committee meeting at Relevant Church in Addison when she was suddenly beset by pains in her arm and chest, nausea, and vomiting. The wife of the Relevant minister was sharp enough to realize what was happening, and she got Alcala into an ambulance racing toward the hospital.

Fortunately, they didn’t have far to go. The Heart Hospital Baylor Plano was just a short drive away. There, the doctors and specialists in the emergency room saved the young woman’s life.

“They gave me four shots of morphine, and I was still in pain,” Alcala says of her condition when she arrived. “Now I have four stents [in my heart]. Lucky for me, a stent specialist was on duty that day.”

It’s in part because she realizes how lucky she was that Alcala decided later to join a nationwide heart disease research program in which The Heart Hospital is participating. “If I can help doctors understand how to better treat other women who have heart attacks, then that’s what I want to do,” she says.

The full name of the National Institutes of Health study on heart disease in younger women is “VIRGO—Variation in Recovery: Role of Gender on Outcomes of Young Acute Myocardial Infarction Patients.” The Heart Hospital Baylor Plano is one of 150 medical centers in the United States participating in the trial, which began at the Yale School of Medicine in 2008.

Medical professionals say the study is long overdue, largely because, in contrast to the case with men, less is understood about how cardiovascular disease presents itself in women. The most common symptom associated with a heart attack is chest pain, pressure, or discomfort. But it isn’t always severe or the most predominant symptom, especially in women. Women are more likely to have other symptoms, including neck, shoulder, upper back, or abdominal discomfort, shortness of breath, nausea or vomiting, sweating, lightheadedness, or unusual fatigue. And, according to The Heart Hospital, two-thirds of women who die from heart attacks never had any previous symptoms.

Dr. Deepika Gopal, who’s heading the research project at The Heart Hospital, says the medical community should care for women with heart disease differently, but that too often it doesn’t. “We still treat these women like they’re little men,” says Gopal, who’s co-medical director of the hospital’s Women’s Cardiovascular Institute and director of Cardiac CT Imaging and Cardiac Rehabilitation.

The study will focus on about 2,000 wo­men between the ages of 18 and 55, because there are significant differences in the outcomes of heart attacks for pre- vs. postmenopausal women. A smaller group of 1,000 men will also be studied to allow comparisons.

Research shows that younger women have fewer attacks—about 40,000 a year in the United States—but that they’re twice as likely to die from a heart attack as similarly aged men. More than 16,000 women age 55 or younger die prematurely in the United States each year from heart disease, according to the American Heart Association. The subsequent risk of heart disease-related death for young women who survive a heart attack is about 50 percent higher than it is for men. 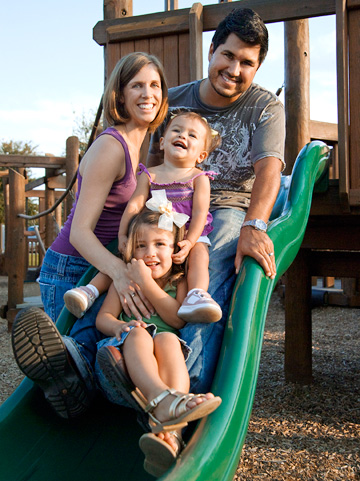 SURVIVOR: Stacey Alcala with her husband Joey and their two girls, Isa and Alexandrea. photography by Jorge Rivas
photography by Jorge Rivas
The VIRGO study is aimed at determining why this group of women has such poor outcomes after suffering a heart attack. Researchers want to know how delays in recognizing symptoms and delays in treatment affect the risk and outcomes for women, and whether women get the same quality of care as men. The study also will analyze genetic, demographic, psychosocial, and behavioral factors that contribute to early heart disease in women.

The study’s cut-off age is 55—the average age for the onset of menopause—because the differences between men and women in the likelihood of having a heart attack, as well as the risk of dying from one, disappear among the older age group. After menopause, women lose hormones that protect them from heart disease, and they become just as susceptible as men are, Gopal says.

Stacey Alcala is one of 27 study participants, women and men, at The Heart Hospital and at Baylor Heart and Vascular Hospital on the campus of Baylor University Medical Center at Dallas, which also is participating in the study. Based on the current enrollment and the number of participants needed, it likely will take three years to finish the project, according to Nanette Myers, director of clinical research at Baylor Research Institute.

At that time, the Dallas-based American Heart Association will help make the results public through its Go Red for Women campaign, Gopal says.
Study participants are asked to stay in the trial for at least 12 months. They’re contacted by the Yale Follow-Up Center four weeks after leaving the hospital and are contacted again 12 months after their discharge from the hospital. Participants are interviewed about a variety of topics and asked to complete questionnaires about dietary intake, physical activity, and other factors. Blood samples also will be taken periodically for evaluation.

Focused on the Heart

The 68-bed Baylor Heart Hospital opened in Plano in January 2007 and was created through a partnership between Baylor Regional Medical Center at Plano and 86 cardiovascular physicians and surgeons practicing in North Texas. Its Institutes for Cardiovascular Innovation—a portfolio of specialized departments that focus on clinical care, research, and education—includes the Women’s Cardiovascular Institute.

The WCI offers clinics that include CT calcium scoring, ankle brachial indexing, body mass index calculation, and other tests. It also conducts community education seminars every three months with information on heart disease prevention tailored especially for women, and it participates in a number of national trials.

The Heart Hospital is a $100 million, four-floor building with three cardiac catheterization labs, three electrophysiology labs, three operating rooms, an endovascular suite, a vascular lab, an eight-bed postanesthesia care unit, and a 100-seat auditorium. The hospital employs about 400 people. A $40 million expansion is expected to be completed in July 2011.

Since February, Alcala has formed a bond with the medical staff at The Heart Hospital. She has gained the kind of education in the treatment of heart disease that no one wants to experience, but she’s grateful for the staff who were there when she needed them.

In May, along with her husband and two daughters—ages 4 and 1—she celebrated her 30th birthday. “I always thought being 30 wouldn’t be so bad,” she says, “except then I had a heart attack.”

Life and birthdays have new meaning for her now.

She recently passed all her required stress tests and says her heart is completely repaired. “They still don’t know why this happened to me. There’s not a big explanation,” she says. “They’re still testing. The main things that could have caused it have been ruled out.”

Aside from a more intense love of life, Alcala says she doesn’t let her health scare dominate her life. “Except for taking [medication] every day,” she says, “I don’t think about the fact that I had a heart attack.”