His office window tops out just above the sidewalk, sinking down from there, several feet below street level. It lets in only a hazy light, never really bright, not exactly dark. Wingtips, kitten heels, and sneakers pass by above—Capitol Hill’s mix of tourists and public servants walking past, on their way to or from the nearby subway, which shakes the office every few minutes as it passes underneath.

His desk is angled into the corner. In the past seven years, he has sat at his desk a lot, taking phone calls from Republican party leaders—his party’s leaders. He has listened as they told him he needs to be a “team player,” that his vote mattered, that it would be critical to the party, or that “the president wants your support.” And in those moments, after he’d hung up, he’d place an 8-by-10 photo of Claire, 7, and Travis, 6—his daughter and son—flat on his desk, look at it in that hazy light, the desk rattling, and he’d ask himself: is making my party leaders happy worth the price this legislation will impose on my children?

There were times that Rep. Jeb Hensarling’s answer was no. Important times. The biggest was in October 2008, on the $700 billion economic stimulus bill that his party leaders; his president, George W. Bush; and his party’s presidential nominee, John McCain, wanted. But Hensarling—for himself, for his kids—believed a yes vote would lead the country on “a slippery slope to socialism.” And so, risking alienation from the party leaders who had seemed ready to hand him more power, the four-term Republican from Texas’ 5th District voted “nay” to the government’s biggest intervention in the economy since the New Deal.

Jeb Hensarling’s decisions have gotten a lot easier since then. His party is out of power. Way out. His president is back in Texas, living just miles from Hensarling’s own Dallas home. John McCain was routed by Barack Obama and now works not from the White House but from a Capitol Hill office just blocks from Hensarling’s. (Still, McCain’s office is aboveground.) Plus, many of Hensarling’s Republican colleagues in the House of Representatives have been sent back to their districts to practice law or medicine or car repair or whatever. But Jeb Hensarling is still there, still working in murky light in a shaky office (his current quarters are a few doors down from his Bush-era office). And when the phone rings now, it isn’t Karl Rove or Dick Cheney calling him to the woodshed; it’s CNBC or the Wall Street Journal asking for his opinion on the latest Democratic proposal to send billions to the auto industry or to re-regulate banks or change health care or, well, whatever. Because now, Jeb Hensarling has emerged as one of the most listened-to members of a political party that has been bereft of a voice since November 4, 2008. And with Democrats in command, he hardly needs to look at that picture of Claire and Travis anymore, because he is hardly ever torn about how to vote anymore.

His vote no longer matters. Not really.

===Jeb Hensarling has emerged as one of the most listened-to members of a political party that has been bereft of a voice since November 4, 2008.!==

He did not particularly like it, chicken farming. But pretty much from the time the family moved to College Station when he was 6, Jeb was cleaning up after chickens. And also collecting eggs and vaccinating the chicks and sending the birds to their doom and everything else a poultry professional does. Then, one day, while a student at Texas A&M Consolidated High School, he got out of the business. “As soon as I got my driver’s license,” Hensarling says, speaking from a couch in his Capitol Hill office, “I put the poultry farm in my rearview mirror. Really, there’s not much you could do with chickens that’s legal that I hadn’t already done. And even today I look at eating fried chicken as a form of revenge.”

He smiles. It’s a crooked grin. The poultry business may have been unpleasant, but his involvement in it was critical to his political career, to making Jeb Hensarling a man the Dallas Morning News has called “a rising congressional star.” Because without those stinking birds, Hensarling might not have gotten interested in politics in the first place, much less gotten elected to Congress.

“My dad was president of the Texas Poultry Federation,” Hensarling recalls. “And once a year, the president of the federation got to go to Austin and have a three-minute photo op with the governor. So my dad, I remember, brought in a huge, big, cast-iron skillet with ostrich eggs for the photo op. I got to meet then Governor John Connally, and I thought, ‘Wow, being governor is probably a pretty cool job.’ That was my first introduction to politics.”

That was 1968. He was in the third grade then. The national debt was $368 billion, a number he could hardly have comprehended. Today the debt is $11.8 trillion, and none of us can really comprehend that. “Few things frighten me today as much as the amount of debt that we are placing on our children and grandchildren,” says Hensarling, who has a degree in economics from Texas A&M and a framed National Review article on his reception wall that calls him “Rep. Budget Reform.” “Doing something about the mounting debt is one of the driving factors in my life. I have spent most of my congressional career trying to warn about this peril and trying to offer reform to the spending system in Washington.” 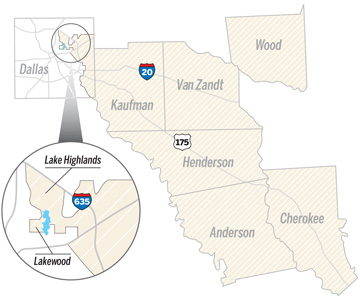 THE LONG REACH OF JEB HENSARLING: Hensarling’s 5th Congressional District stretches northwest from Cherokee County to the East Dallas neighborhoods of Lakewood and Lake Highlands.
That’s why Hensarling is so concerned about the $700 billion bailout—which, the way he and the nonpartisan Congressional Budget Office figures it, is actually a $1.1 trillion plan, once you consider the interest payments on that $700 billion, all of which will have to be borrowed. He doesn’t like all that borrowing, doesn’t like it that his Claire and Travis and all the kids like them will have to pay that money back to “the Chinese, whom we’re borrowing that money from.”

To be fair, the Chinese hardly own all of our debt. And government debt is both an asset and a liability. If you own a U.S. Treasury security, you have the asset. The government has a liability to you, but you’re the one who’ll profit from the interest Uncle Sam will—well, ideally—someday pay. And it is a distinct possibility that you are not Chinese. Still, the debt is rocketing, and excessive debt is, as any economist, including Jeb Hensarling, will tell you, a serious danger to the nation.

But we’re getting ahead of ourselves. First, back to his story.

There was something else that got young Jeb Hensarling into politics. Something besides the governor and the ostrich eggs. His grandfather on his mother’s side became justice of the peace in Milam County, Texas, after retiring at 65 from a career that included stints as a cowboy, a truck driver, and, finally, an oilman—or, at least, a distributor for Magnolia Oil Company. “When we’d visit, I got to spend a lot of time hanging around the Milam County courthouse listening to all the tales of political intrigue in Cameron, Texas,” Hensarling says from his office couch. The couch sits in a clouded corner, diagonally across the room from the angled desk. On the floor in between there’s a large carpet bearing the state seal of Texas. “I really enjoyed the local politics in Cameron,” he continues. “Now, how that all brought me to Congress beats the heck out of me. Maybe if Dr. Phil were here, he could figure it out.”

Doubtful. But another Phil probably could: Phil Gramm, the longtime senator from Texas. He was one of Hensarling’s professors during his undergraduate studies at Texas A&M, where he majored in economics. Gramm taught Hensarling about much more than just the Phillips Curve and the Law of Diminishing Marginal Utility. He taught him—though not intentionally—what it meant to be a Republican. “My grandparents were all Democrats,” Hensarling says. “But my parents were Republicans. I liked to joke that we were one of 70 families in Texas that voted for Barry Goldwater in 1964. And I still remember that my mom cried for three days after he lost. Until I ran for office, she never worked on another political campaign.

“But even though I had grown up as a Republican, I didn’t know why I was a Republican until I studied economics. I suddenly saw how free-market economics provided the maximum good to the maximum number, and I became convinced that if I had an opportunity, I’d like to serve in public office and further the cause of the free market as a Republican.”