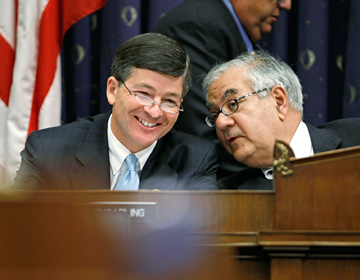 TO BE FRANK: Hensarling gets five minutes to say his peace about reckless spending, but only when House Financial Services chair Rep. Barney Frank (right) calls a meeting. photography courtesy of Getty Images
Gramm was apparently thinking the same thing. He ran for Congress in Hensarling’s junior year, 1978. He won. The same, however, cannot be said for Hensarling. He ran for student body president that year and lost. “I came in second in a two-man race,” Hensarling says. His victorious opponent, Bobby Tucker, recalls that the race was very close and “very aggressive.” The two lost touch after college, but Tucker, now an associate pastor at Antioch Baptist Church in Conway, Arkansas, has followed Hensarling’s career and says his old foe doesn’t appear to have changed much. “I admire his consistency,” Tucker says. “He is just as serious and dedicated now as he was then. And the convictions he fought for then are the same as they are now.  Jeb was born to be a politician, but more importantly a public servant.”

Losing was probably a good thing in retrospect. It gave Hensarling plenty of time to go work as a summer intern in Washington for the newly elected Gramm in 1980. “I stayed in an un-air-conditioned dorm room at Georgetown University,” Hensarling says, shifting on his couch as if he recalls the discomfort of Washington’s brutal summer humidity. “I filed. I answered phones. I thought I was going to write legislation. But I had to wait another 30 years for that.”

After graduating from Texas A&M in 1979, Hensarling turned down a full-time job in Gramm’s office to get his law degree from the University of Texas, then spent two years practicing law—corporate work, mostly—in San Antonio. “I loved the paychecks but hated the work,” he recalls. So Hensarling rejoined Gramm, now a senator, in 1985, as Gramm’s Dallas-based state director. In 1990 he ran Gramm’s re-election campaign, then moved to Washington to serve as executive director of the National Republican Senatorial Committee, chaired by Gramm. The job largely involved fundraising and drumming up support for Republican candidates, which proved good practice when Hensarling decided to leave Gramm’s staff again, this time to pursue work in the corporate world, where he’d remain until Pete Sessions’ 5th District seat opened.

Hensarling went to work for companies associated with Dallas billionaire and longtime Gramm supporter Sam Wyly. That included time at the ecofriendly Green Mountain Energy and a three-year stint at Maverick Capital, a hedge fund founded by Wyly. Hensarling’s job was to raise cash from institutional investors, which was not entirely new to him, since he’d raised funds for Gramm and for other Senate Republicans. But he was by no means a hedge fund expert. “He was kind of learning on the job,” says Rob Snyder, the chairman of Dallas-based Stream Energy whose family was one of the first investors Hensarling worked with at Maverick. “But he had such a good intellect that it wasn’t a problem for him.”

Snyder says he found Hensarling to be a “very principled guy, very straightforward.” Besides that, Snyder says, “Jeb is the type of guy who’d be a good travel companion if you were taking a cross-country tour in a convertible Cadillac.”

Rep. Barney frank enters the hearing room belly first. Dog-eared papers are stuffed under his arm as he shuffles awkwardly behind the chairs of several other lawmakers who have been waiting for him to arrive. This is the House Financial Services Committee, and Frank, the Democrat from Massachusetts, is the boss. Today, sitting immediately to the boss’s right, is Jeb Hensarling. The hearing room cascades down in front of them, with dozens of committee members seated in several tiered rows. At the bottom, photographers crouch on the floor, jammed almost right up against Timothy Geithner, the U.S. Treasury secretary. He is here today to testify about how a new consumer credit protection agency would be structured. The agency may one day regulate, and possibly preapprove, all the types of “financial instruments”—credit cards, mortgages, car loans, etc.—that banks offer us regular folks. Geithner, one of President Obama’s most important cabinet members, thinks the agency is a good idea. And Barney Frank wants it. A lot.

The very idea of the agency, and of the new layer of regulation it would bring, makes Hensarling cringe. But guess what? Democrats consider it a priority, so Congress will create the agency anyway.

Even so, Hensarling mounts an argument to limit the agency’s scope, if nothing else. “This recession wasn’t created by a lack of regulation,” Hensarling tells Geithner during the five minutes he’s allotted. Five minutes. That’s it. Hensarling is the top Republican on the Financial Institution subcommittee, and the No. 2 Republican on the very powerful budget committee, and he’s also the only member of Congress, and one of two Republicans, on a five-person congressional panel set up to oversee the $700 billion economic bailout package—that same package he voted against last October. And yet the most he will get out of the Obama administration’s top economic official is five minutes. And he’ll get those five minutes only when Barney Frank wants to schedule a hearing. Such is life in the minority.

“The Democrats have such great numbers that they don’t really need to negotiate with Republicans,” Hensarling says. “And, of course, that’s frustrating. But I can’t stay frustrated all the time. I just have to realize that, when you’re this deep in the minority, you’re not going to legislate your way back into the majority. You’re going to communicate your way back into the majority.”

Which is why, halfway through a three-hour hearing, Hensarling leaves his seat, walks through a crowded staff lounge behind the hearing room, and steps into the corridor outside 2128 Rayburn. There, a CNBC cameraman is waiting to put Hensarling on the network’s Power Lunch show live. It is his third national TV interview this week, and his second on CNBC. “I like having Hensarling on because he knows his subject matter—really knows it and can really communicate it well,” says one CNBC on-air personality. “And he’s also able to debate the issues in a civil tone, which is good on our air.”

Indeed, though he has been mocked on The Daily Show for suggesting that the government also adopt a “Cash for Cluckers” program—chickens!—to go along with the Cash for Clunkers plan, Hensarling has stuck to the issues when criticizing his Democratic opponents. Sure, he has said he believes the country is teetering on the brink of destroying the free market in favor of “European-style socialism.” (“If the people in my district wanted to live in France, they would have moved to France,” he said.) But he hasn’t been going around calling the president a Nazi who was born in Kenya. Which is, well, something. “For a right-wing, very conservative Republican, Hensarling seems pretty reasonable,” says one Democratic staffer who works for a congressman on the Financial Services Committee and who, not surprisingly, asked not to be named.

Hensarling seems pretty reasonable today on Power Lunch as well. So, too, does his debate opponent, Rep. Brad Sherman, a California Democrat who sits one tier down from Hensarling on the Financial Services Committee. Their segment lasts nearly 10 minutes, twice as much time as he got with Geithner. In it, Hensarling peppers his points with the words “systemic,” “exigent,” and “perpetuity.” He will almost certainly regret uttering all three.

Because here’s the challenge: if you can’t legislate—and the Republicans really, really can’t legislate, at least until after the 2010 midterm elections—then you must communicate, and you must communicate in terms that everyone can understand. Otherwise, Republicans have no chance to connect with an electorate that bounced so many GOPers out of Washington in both 2006 and 2008. And, in Hensarling’s case, the subject matter he’s communicating about isn’t as simple as, say, God and country (although he clearly favors both, having backed anti-flag-burning measures and backed marriage specifically “between a man and a woman”). No, in his case, the subject matter is $11.8 trillion in federal debt, a federal budget system based on earmarks, a multibillion dollar bailout of the automotive industry, or the $700 billion Troubled Asset Relief Program, aka, TARP, and so forth and so on, all the way down into a rabbit hole that only someone with an economics degree could find his way out of. How do you make any of that fathomable to your average insurance salesman in Lakewood or a chicken farmer near Palestine, Texas? “You just put these things in terms that everyone can understand,” Hensarling says. “What is TARP? TARP is a $700 billion revolving bailout slush fund. What TARP was designed to do is different from what it did is different from what it does. But now it is a $700 billion slush fund for the administration to advance their social and political agenda. Period. Paragraph.”

Barney Frank would certainly choose to “insert text”—very, very contradictory text—somewhere before that period or after that paragraph. But you get the point: keep it simple.

“Hensarling’s communication skills are very good,” says David Johnson, a Republican pollster and strategist and CEO of Atlanta PR firm Strategic Vision. “He can talk about complex issues but make it so the person on the street can understand what he’s talking about.”