Kim Butler, director of leasing for HALL Group,  grew up in a football family. As a child, she’d travel with her dad to watch his alma mater, the University of Houston, play in the Astrodome. When her younger brother began playing college ball, she’d religiously attend his games, too. But it was her time on the sidelines as a cheerleader—middle school through college at Texas Tech University—that solidified her love for the game. “It was so much fun,” she says. “Once you’ve been down there on the field, that close to the action, it’s hard to go back to sitting up in the stands.”

Along with Texas Tech, her No. 1 team, Butler follows three other programs: Southern Methodist University, Texas Christian University, and the University of Georgia. She got her master’s degree at SMU and her brother played there until the school was hit with a “death penalty” for NCAA violations; he played his senior year at Georgia. Her oldest daughter attended TCU. “I cover three conferences,” Butler says. “My adopted PAC 12 team is Washington State, because of Mike Leach. It gives me a reason to stay up late.” 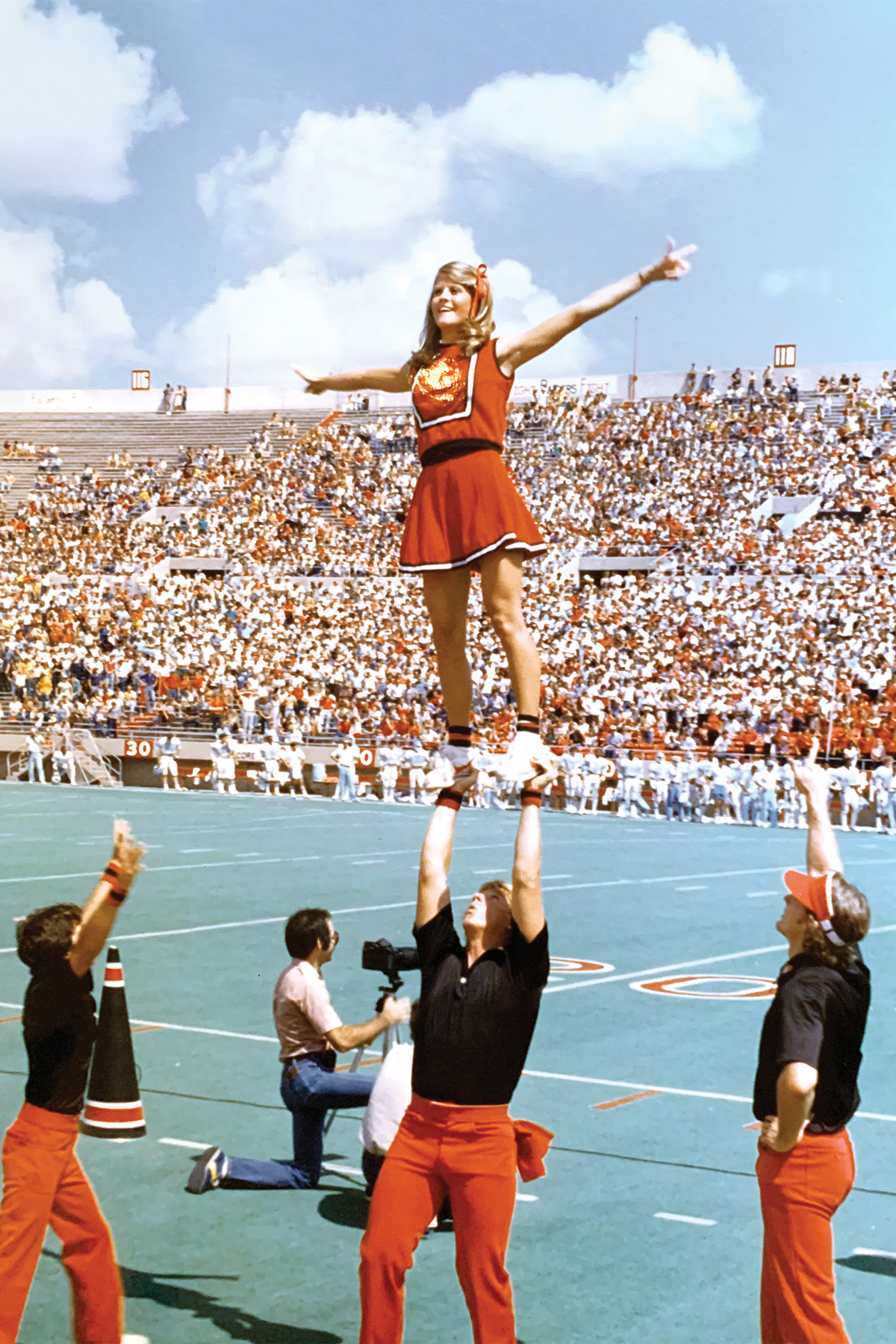 If she’s not attending a game in person, she catches the action at home, where her husband Bruce (who played baseball at Tech), had a television wall installed a few years ago as a birthday present for his wife, so she could watch multiple games at once.

She starts her Saturday mornings with College GameDay on ESPN, while whipping up some duck gumbo, lamb chops, stuffed jalapeños, or gourmet nachos. Then she maps out her viewing plan for the day.

She starts with her top four teams, then looks for the AP Top 25 games where the spread is under five points. “Those bookies know what they’re doing,” Butler says. “I’ll put a star next to those games and then choose what to watch throughout the day. The fun part is going back on Sundays and seeing where I should have bet.”

Rose Bowl
Pasadena, California
“Tank Carder, a linebacker, batted down a pass on a two-point conversion, giving TCU a 21-19 win. It was one of the most exciting, thrilling experiences ever.”

Notre Dame
South Bend, Indiana
“We went up to watch SMU play. The fall colors were breathtaking, and seeing Touchdown Jesus and taking part in the traditions was so much fun.”

Alamo Bowl
San Antonio
“We’ve been several times with Tech, but the best was when TCU came from 31 points behind with a walk-on quarterback who had never started a game for the team. People went berserk; it was the most electric moment. Someone should make a movie.”

Don’t plan on getting an invite to a watch party anytime soon; Butler is all-business and doesn’t want to strain to hear the play-by-play over the chatter of others. Only immediate family is allowed. Her husband knew what he was getting into from the start; the couple spent their honeymoon at the Aloha Bowl in Hawaii. “My brother was playing in the game, so it worked out great,” Butler says. “We got caught in traffic afterward and missed our flight from Oahu to Maui. Because of the bowl game, none of the hotels had any availability. So, we ended up having to share the room my parents had.”

Butler’s love for college games doesn’t extend to professional football. It’s the heart of the players in amateur sports that appeals to her. “There are so many personal stories of dedication and sacrifice,” she says.

College football has become big business— the country’s 25 most valuable programs rake in $2.7 billion a year, netting $1.5 billion in profit, according to a recent report from Forbes, with Texas A&M and the University of Texas leading the way. Butler believes that college players should be paid, but worries that if it’s not handled right, it could take some of the magic away.

As she watches games on Saturdays, she’s often texting back and forth with clients, prospects, and colleagues, talking football. “It’s a great way to build camaraderie,” she says. “Everyone in business has a favorite team. You can go all over the country and meet people and have an immediate connection. There’s just something about college football that brings people together.”