Subscribe
Advertisement
When Sarah Hinkley first tried yoga in 2005, she hated it. A partner at Thirty-Four Commercial, a Dallas-based real estate firm she founded last year, she had long been active in the fitness world—think high energy, “rah-rah” cardio workouts. But leaning into configurations like the Warrior Pose was more challenging than she imagined. “You’re in a pose, which should not be a big deal, holding your arms up and thinking, ‘How is something that looks so easy so painful?’” Hinkley says.

Walking out of that initial class, she never dreamed that she’d one day become a yogi, or that her passion for the spiritual practice would inspire her to become certified and teach yoga to others. But that’s precisely what happened.

She walked back into the yoga studio in 2013 for one specific reason: a bad breakup. “I was at a place of surrender,” Hinkley says. “It was a transitional year in my life, and I found that whatever state I was in when I went to yoga, I felt so much better coming out.”

The classes became her salvation, first weekly, then twice-a-week, then part of a daily routine. “Yoga is one thing you can actually advance at with age,” she says. “It’s not something you’re too old for, too inflexible for, or too unfit for. If you keep at it, you will see little breakthroughs. For me, those breakthroughs were kind of like rewards, and I got addicted.”

It wasn’t just about being able to touch her toes or bend her body into different shapes that captivated Hinkley; it was the transformation she saw in both her personal and professional lives. Yoga, she says, taught her how to relax. 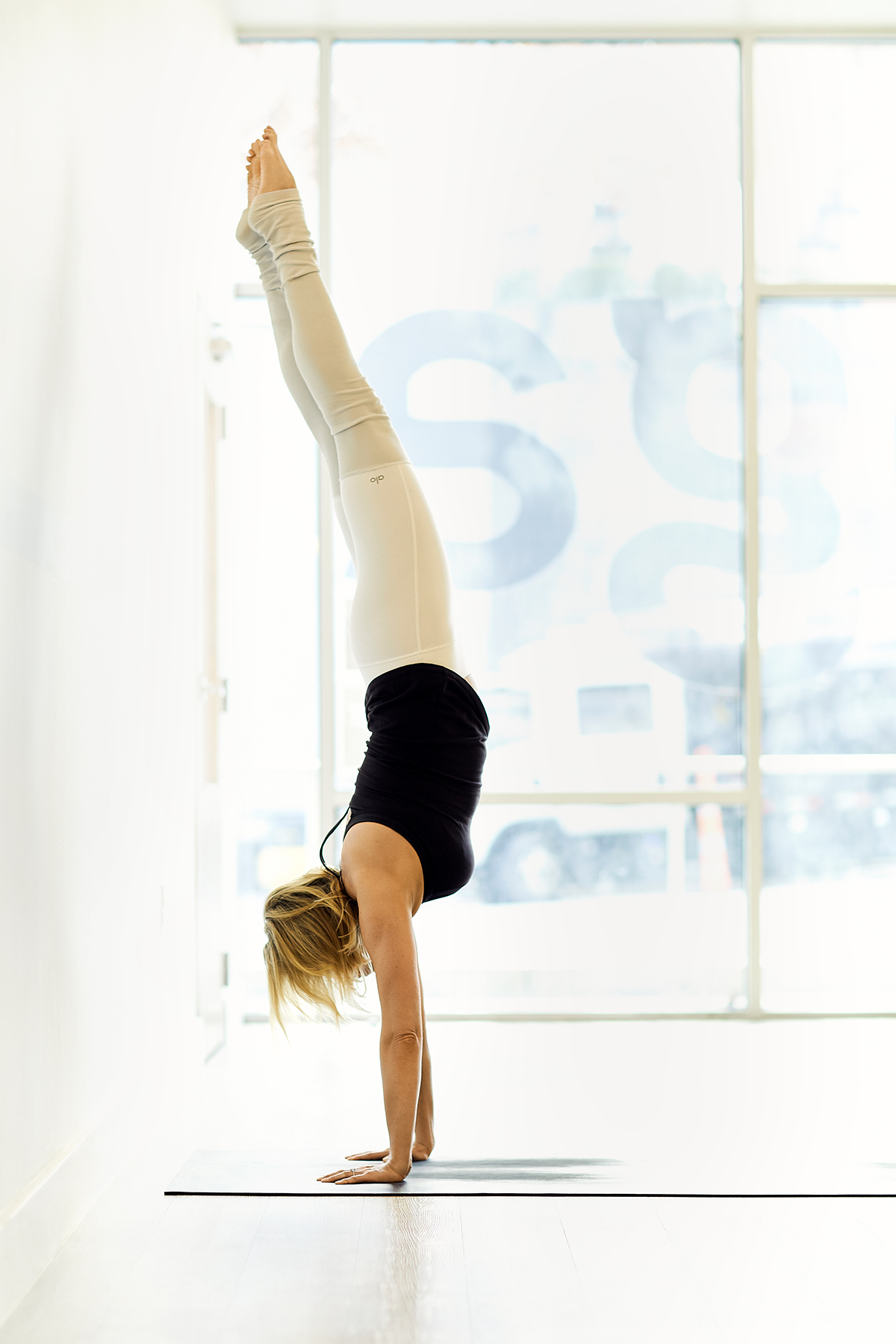 When Hinkley was in her 20s, she says she had no idea that she was an anxious person until a co-worker pointed it out to her. “He told me that my mind is a muscle and I could train it not to race. And I challenged him, saying ‘You don’t understand. My mind works so fast—this is just how I am.’”

Yoga put that belief to the test, she says, and it taught her to power through.

“I have a strong work ethic, and I’m really intense,” Hinkley says. “With yoga, the whole thing is to keep a calm exterior. You’re doing something extremely physically challenging, but your face wouldn’t convey that, as you’re focused on breathing in and out. Just like in life, when hard things happen, it slows my reaction time. I think about something before responding, which I did not use to do. When I’m in a really hard moment, I remind myself to breathe through it, that it’s not going to last forever, and in the end, it will be OK.”

“I found that whatever state I was in when I went to yoga, I felt so much better coming out.”

These skills, Hinkley says, have come in handy in the high stakes business of commercial real estate. A 15-year industry veteran, she rolled the dice and launched her own firm in late 2017.
A significant property sale she closed last year recently led to a key leasing assignment: The Link in Uptown, a 300,000-square-foot office tower planned for a high-profile tract near Olive and Akard streets.

“This industry can be real volatile, with huge wins and huge losses; yoga teaches you to go like this,” Hinkley says, drawing a straight line in the air with her hand. “You learn how just to relax. … There’s this overwhelming euphoric sense of peace and calm when you’re finished.”

Hinkley pursued a teacher certification in yoga in 2017 for two reasons: she wanted to improve her practice, and she wanted to give back some of what she’d learned.

Having seen so many transformational changes in her own life, she wanted to help others reap the benefits, too. Teaching classes at We Yogis has helped her become a better mentor and to have more patience—especially with herself. “You mess up. We all do,” she says, thinking back to rookie mistakes made during some of her first classes. “I’ve learned that you have to forgive yourself and move on. As a teacher, and if you mess up, you can’t just quit and turn the music off because you’re embarrassed. You have to keep going.

“Things like that happen all the time in life,” she says. “You mess up, but you have to keep going.”

A complete guide to the year’s largest office, industrial, and retail leases and sales.
By  D CEO
Commercial Real Estate

North Texas continues to be an attractive destination for companies. Six experts share what to expect in commercial real estate's industrial sector in 2017.
By  Christine Perez
D Magazine Directories