For the first time since the pandemic began, Dallas County added 1,000 or more new COVID-19 infections each day of the last week. But the amount of people dying from the coronavirus hasn’t reflected that jump. The county has hovered below 10 new deaths per day for most of the past month, sans a couple daily spikes of 20 and 16 deaths. So why hasn’t the death rate risen with the new cases? The answer is a mixed bag: deaths often lag new infections; increased availability of testing means catching more mild or asymptomatic cases of the disease; and more young, otherwise healthy people are getting sick.

According to Dallas County Health Director Dr. Philip Huang, 60 percent of the new infections have been among patients younger than 40. These people are better suited to beat the virus, Huang says. With increased testing, there are more asymptomatic residents getting tested, meaning the positive case count is increasing among people with few symptoms who aren’t likely to end up in a hospital or require critical care. In addition, the death rate has remained lower because long-term care facilities, which accounted for many of the early deaths, are improving their ability to reduce the spread of the virus.

Ample hospital capacity also keeps the mortality rate down as cases rise. When hospitals aren’t overrun, they are able to help most of their patients recover. When they are having to make decisions about who gets a ventilator or other treatment, as was the case in New York and appears to be coming in Houston, the death count rises.

So far in North Texas, hospitals in the aggregate have had space and machinery. Only around 35 percent of available ventilators have been in use. Total hospital occupancy is in the 70 percent range, but that doesn’t tell the story of what’s happening in individual hospitals. Outside of Parkland and UT Southwestern’s William P. Clements Jr. University Hospital, it is difficult to find patient counts at other hospitals throughout North Texas beyond these aggregated totals.

Gov. Greg Abbott and Dallas Mayor Eric Johnson this week both requested the federal government provide additional staff to handle an influx of COVID-19 patients. Dallas-Fort Worth Hospital Council Steve Love told CBS 11 that if hospitalizations continue to rise at current levels, hospitals in North Texas will have to activate their surge plans within the next two to three weeks.

Fox4 then reported that six North Texas hospitals had already requested more staff to handle the uptick in COVID-19 patients. In an interview, Love said that by late July he expects the COIVD-19 volumes to move many North Texas hospitals into surge capacity, where staff will be shifted and rooms converted to care for patients with COVID-19. The staff are already fatigued, and the increase in infections and stress on employees could mean more deaths.

“If the hospitals are overrun, then they can’t keep with the numbers and they have less ability to manage the deaths,” Huang says. 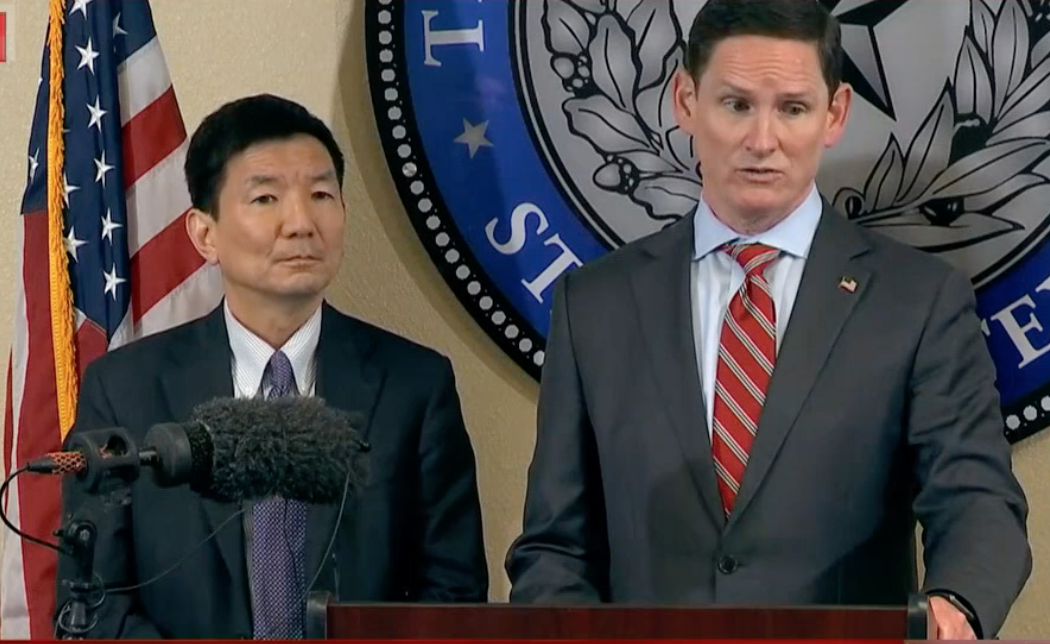 When Dallas County reports a certain number of cases each day, that really means those people were tested several days to more than a week ago. The number comes from what the county receives from the numerous labs in other states that process the testing after samples have been sent from local testing sites. There is more testing happening here. Dallas County is now testing between 4,000 to 5,000 people per day in early July compared to around 2,000 per day a month ago, according to state data. That demand, which is happening across the country, has slowed the time it takes to process those results. County Judge Clay Jenkins says it’s taking up to 10 days to get results back, which isn’t effective for contact tracing.

The death rate also lags behind the new cases. If someone tests positive, it could take several days before they need to be hospitalized. Depending on how they do, it could be days or weeks before they die. So with more cases being confirmed, the death numbers may be lagging while those who test positive become sicker over the following days and weeks. Time will tell.

The number of hospitalizations due to COVID-19 gives an indication that things are trending in the wrong direction. Statewide, the number of people hospitalized for the virus has more than quadrupled since mid-June, which would line up with the reopening of Texas and the Memorial Day holiday. Among the 19 counties that make up the North Central Texas Trauma Advisory Council, there were 580 people hospitalized with COVID-19 on June 1, which had jumped to 1,809 by July 8, according to data from the Texas Department of State Health Services.

That is an increase of 311 percent over about a five week period. Dallas and Tarrant counties account for 1,222 of those hospitalizations. Meanwhile, the seven-day rolling average for deaths in Dallas County was 5 in the first week of June. It was 5.2 in the first week of July. (With yesterday’s 16 deaths, the average rate suddenly jumps to just over 9.)

But even with the increase, COVID-19 hospitalizations represent around 15 percent of the total beds available in DFW (11,769 according to state data), so an increase in COVID-19 hospitalizations isn’t currently close to overrunning the aggregate bed space. Hospital capacity has hovered between 68 and 71 percent in Dallas, and ICU bed capacity has been between 64 percent and 71 percent, according to data collected by Mayor Johnson. But if the hospitalizations are indeed lagging behind this case increase, the region could be in trouble quickly. Hence Love’s concern about the end of the month.

The county’s positivity rate is trending upward as well, meaning more tests are coming back positive. Yesterday, 29 percent of the tests verified COVID-19 infections. The average since the pandemic began is about 15 percent. Gov. Abbott has said that if the statewide positivity rate crested 10 percent, it would be a “warning flag.”

Huang is skeptical, arguing that the positivity rate is difficult to know for sure. There are so many clinics running tests, both publicly and privately, that aggregating those numbers has been nearly impossible. This information, were it consistent, could be helpful in measuring the spread of the disease. But the positivity rate can also be impacted by where the tests are being administered. Statewide, Huang notes that Texas has performed mass testing in rural areas with few positive cases, which bring the state’s positivity rate down. To get an idea of what’s really happening, you must zoom into each county and, in many cases, each ZIP code or neighborhood.

Huang instead monitors hospitalizations, intensive care unit occupancy, and mortality data, which indicate the severity of the spread and aren’t impacted by asymptomatic positives or the volume of tests being given in an area.

Dallas County has been in the red zone of “stay home, stay safe” since the pandemic began. There has never been a 14 day decline in new cases or hospitalizations, which was originally the benchmark for opening the state back up. Huang has a reminder for people who are considering non-essential travel: “Just because you can, doesn’t mean you should.”