The company's statements about its destruction of part of the Old Fish Hatchery don't align with reality.
By Tim Rogers | October 9, 2020|12:58 pm
Advertisement

Yesterday I swung by Kelly Cotton’s house to take a picture of the old drawing you see at the top of this post. Those are the Fish Hatchery ponds at White Rock Lake as they looked when they were in use, many decades ago. The drawing was done in 2000 (larger image here), after TXU had lied to environmentalists about its intentions and then come through and clear-cut an area to erect power lines. Cotton told me the story a few days ago, and I included it in my Tuesday post about the devastation that TXU’s offspring has wreaked on the wooded area. I’m referring to Oncor, the company that spun off from TXU and is run by Allen Nye, son of the man, Earle Nye, who ran TXU 20 years ago.

Here’s what has changed in 20 years: in 2000, Earle Nye’s TXU worked with environmentalists, then double-crossed them, clear-cut the land, apologized, and said it would “protect wildlife habitat and … provide the public with opportunities to enjoy and study nature” at the Old Fish Hatchery. In 2020, Allen Nye’s Oncor never bothered to talk to environmentalists, clear-cut that same land, then lied about what it had done.

First, Oncor says the affected area amounts to 3 acres. I said Tuesday it was 7. I’ve now spent way too much time on Google Earth measuring the area, and on this point I must concede. The red line along Oncor’s right of way at the top of this post is about a third of a mile long. If it’s 80 feet wide, that gives us 3 acres. (A football field, with end zones, is 1.3 acres.) My apologies for overestimating the acreage earlier.

But look at what Oncor says in its statement:

“The ROW had become overgrown with rapid-growing, dense, incompatible vegetation, many of which had the potential to reach heights that could interfere with electrical equipment, and an inaccessible mat of already downed trees. This created a potential fire hazard and required the use of non-selective vegetation control methods. The majority of vegetation in both the overstory, or uppermost canopy layer, and the understory, or lowermost canopy layer, was also identified as nuisance or invasive species that reduce ecological value of wildlife habitats.”

In my experience, when someone uses euphemistic language like that, they are attempting to have one over on you. “Non-selective vegetation control methods” means “clear-cutting.” After Blackmon surveyed the area, she told the DMN, “It looks like an atomic bomb went off.” I like her analogy. It made me wonder how Oncor’s PR department would describe the U.S. military’s work at the end of World War II.

Anyway, as Master Naturalist Ben Sandifer told me Monday, “The right of way area did have quite a few trees but was mostly a mosaic of emergent wetland, trees, and grasses. It was lush with sedges, rushes, duck potato, and smartweeds — plants that might reach knee high, if that, during growing season and never a threat to the secure and safe transmission of electrons to Oncor customers.” So most of the vegetation could never have caused Oncor a problem. Oncor said some of it had the potential to cause a problem. Their solution: kill everything.

Where Sandifer saw a lush area that provided “the background to many Audubon Dallas bird walks where the right of way provided the backdrop to a foreground full of interesting avian species” and where “each little wetland pond was its own special diorama of sorts,” Oncor saw a “majority of vegetation [that] was also identified as nuisance or invasive species that reduce ecological value of wildlife habitats.” Their solution: kill everything.

Think about that. Oncor says that most of the stuff growing in the wetland actually made the land inhospitable to wildlife — or, I guess, it reduced the ecological value of the area. To increase the ecological value, they clear-cut the land and reduced everything to mulch. Pardon me. They trimmed the area. Oncor said in its statement: “In just 30 days since our trimming, regrowth of vegetation in the area is already occurring.”

Vegetation is, in fact, returning. I can confirm that. Here’s a picture I took Monday: 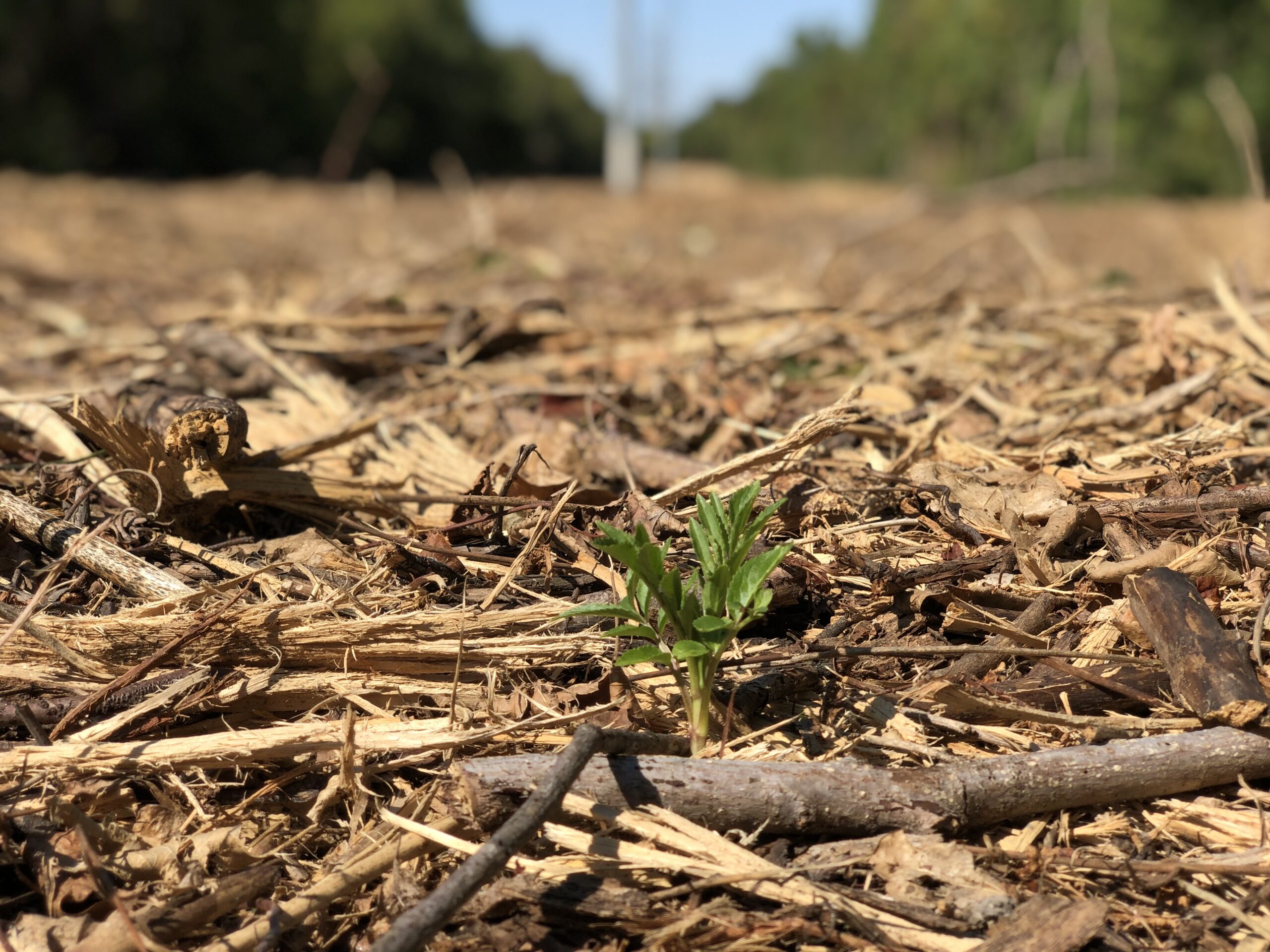 In another 20 years, if Allen Nye doesn’t have a son who embraces non-selective vegetation control methods, maybe some of the flora will have returned.

And what about the fauna? From Oncor’s statement after its recent work: “A subsequent Oncor review revealed no apparent effect to wildlife.” Kelly Cotton seems to disagree. From yesterday’s DMN story: “A beaver dam where he had taken DISD students on field trips many times over the years, was ‘completely wiped out,’ he said. ‘Generations of beavers had used that dam,’ he said.”

Councilwoman Blackmon was on her way this morning to hike at Cedar Ridge, but she texted to say that she is not done with Oncor. She says she wants to see their environmental reports and the plans that were drafted before they did their work. She wants to know how we can prevent this from happening again.

Sandifer told me in an email: “Fixing this issue now and in the future will require a diverse spectrum of engaged community members who bring critical expertise with them. Respecting everyone’s input, opinion, and thoughts can drive forward a well-planned strategy to get nature back to an area that has been completely destroyed.”

I am thankful that Kelly Cotton, Paula Blackmon, and Ben Sandifer (among others) are on the case. They are thoughtful people who show the sort of restraint that I know produces better long-term results in ugly situations like this one.

Me? I have a hard time respecting input from liars.

Today’s game at AT&T Stadium is expected to generate $30 million in direct and $90 million in indirect economic impact.
By Christine Perez
Football

Brown, who also serves as COO and GM of American Airlines Center, offers an insider's preview of the Tulane-USC showdown, economic impact, charitable giving, and more.
By Ben Swanger
Nature

The pair has built a nest. Now we humans have to figure out how to protect it.
By Tim Rogers
D Magazine Directories