The Cedars has long had a tricky connection to downtown. This is largely because of Interstate 30, which separates the neighborhoods, but it’s also because of a lack of attention to the infrastructure that ferries pedestrians between the two. And no giant umbrella or bowler hat is going to fix that. Eastbound Griffin Street is essentially an on-ramp to three freeways: Interstates 45, 345, and 30. When the light is green, you better be a couple feet back on the sidewalk. It’s still nerve-racking when you hit the portion of Akard Street that takes you over the freeway.

In between the two, just across the street from the neon-covered Lorenzo Hotel and its out-of-place umbrella statue, is this giant mound of dirt. Here is what it looks like along the block: 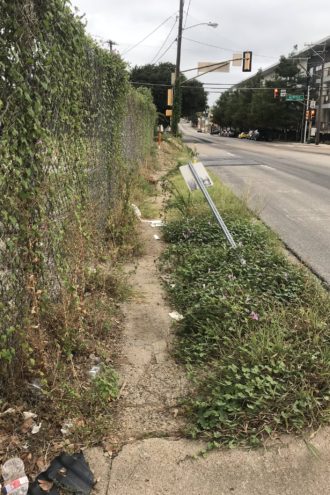 A giant dirt mound on 1018 S. Akard welcomes you to the Cedars from downtown. (Photo by Andrew Barnes) 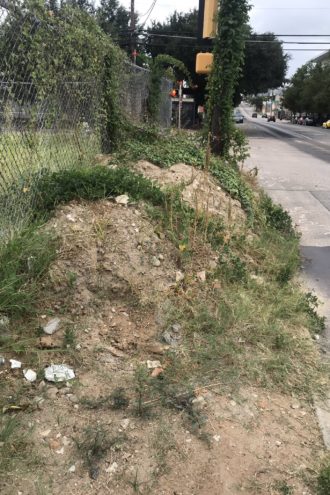 There is a mess of weeds that have crawled through the chain link fence of the property that abuts the street. And a sizable dirt mound has swallowed whatever sidewalk was once there. The address, 1018 S. Akard Street, has only ever been a fenced-off parking lot, at least for the past decade. It’s owned by a company named M.A. Family Investments out of Lufkin, and the Dallas Central Appraisal District says the land is worth almost half a million dollars. (Nobody answered at the number I found for the firm.) A nearby fence has a sign for BMH Architecture Construction, which has apparently been working on sites in the Cedars for more than two years. The person who answered the phone said they’d forward my request to a project manager. 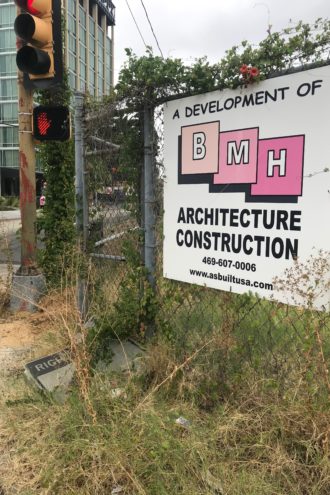 More overgrowth along the fence.

Nearby resident Andrew Barnes took the photos used in this post. He’s an architect who started a small firm called Agent in 2017, which works on projects in walkable neighborhoods like Deep Ellum and Lower Greenville, among others. He calls his unwanted neighbor an “exquisite and vegetated dirt mound.”

The problem is: it’s already a bummer to walk this area, although the Lorenzo across the street has done a nice job with its sidewalks. It’s also not fun when you hit the bridge over the sunken freeway; the barrier along Akard won’t reach above your hip and, if you stare over it, the cars zipping on the freeway below can provide a little vertigo. Nichelle Sullivan, a city spokeswoman, said the Public Works and Code Compliance departments are looking into the matter. Councilman Adam Medrano, who represents the district, also said he forwarded the issue to city staff.

In the meantime, stick to the sidewalk across the street near the Lorenzo. And welcome to the Cedars.