When the city of Dallas wouldn’t allow the Timothy Oulton furniture store to install a giant bowler hat sculpture atop its now-defunct Knox Street store, the thing wound up on a 10-foot pole in an empty field in the Cedars. It was installed in 2013, a non sequitur come to life. The hat greets drivers as they exit the neighborhood onto interstates 30 and 45.

The umbrella has some odd company around town. 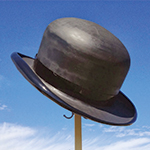 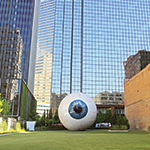 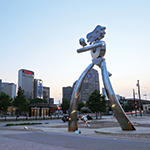 Now, five years later, a giant umbrella eyesore has come to the neighborhood. The 42-foot-tall, misshapen fiberglass sculpture was speared into a stone plinth in the Akard Street median, across from the Lorenzo Hotel, in October. Larry Hamilton, the hotel’s owner, commissioned the thing. He calls it Stanley’s Umbrella, for Stanley Marcus, whose childhood home was in the Cedars. Hamilton says he got the idea from the nearby bowler hat, proving that inspiration comes in many forms, some of which should be ignored.

It is a misplaced ode to something that never was. Yes, Mr. Stanley grew up here, but putting “Neiman Marcus” on a wrap around the umbrella’s neck does little to highlight his significance. The thing feels confused. It is neither cartoonish nor accurate, functional nor considerate of its space. It stands straight and tall, unlike any umbrella you’ve seen, bunched up like two traffic cones stacked atop one another near its handle, whose flat curve looks like it was drawn by a 5-year-old who’s never seen an actual umbrella because he was raised in a drought-stricken country where they aren’t useful.

What’s the point? If this is a public sculpture, shouldn’t the public be able to interact with it? Even if that interaction is walking below it, taking shelter from the—oh, I don’t know—rain? Too on the nose? It should at least fit into the neighborhood, refer to the ’20s- and ’30s-era, low-slung brick buildings and warehouses that provide so much of its character despite the quick-build townhomes and condos that have moved in. Instead, we get a four-story umbrella, a physical representation of a developer who wanted to put his stamp on the Cedars and did so.

On second thought, forget everything prior to this next sentence: the umbrella is actually the most Dallas thing that could have happened in that median.