If you were to cast the role of Dwaine Caraway in a movie, you would choose Dwaine Caraway because no one else could do the part justice. He drives a black BMW with tinted windows and his first name misspelled on its vanity license plates, has a booming voice and animated demeanor, wears expensive suits and jewelry, and at times carries five cell phones. His City Council office featured a marble desk, artwork from around the world and sports memorabilia, and he often kept his door open while berating city staff to exude his power. His campaign against sagging pants landed him on Dr. Phil, and he makes frequent appearances on SportsRadio 1310 The Ticket.

The public and his colleagues mostly turned a blind eye when Caraway gave the key to the city to convicted felon Michael Vick, lied about a domestic violence incident and tried to keep the evidence from becoming public, and abused his power to help an illegal poker house. Shakedown allegations have followed him for years. He even dressed as a pimp one year for Halloween.

If records were kept of the amount of time each member of the Dallas City Council spoke during meetings, Caraway would unquestionably top that list by a wide margin. Mayors Tom Leppert and Mike Rawlings on rare occasions would cut him off or deny his requests to speak on an item for a third or fourth time, but only because Caraway was baiting them to do so. It was all part of the theatrics that helped Caraway create a reality show about local politics of which he’s the star.

Caraway acts in public as though cameras are capturing every move he makes, but only in the occasional news story or on a government access channel do his antics actually appear on television, often times to a small audience. He is a performer who places a high value on time in front of the camera. In exchange for his support on items championed by his colleagues, Caraway was given unprecedented leeway to speak well beyond his allotted time and pontificate about issues that were unrelated to the item up for a vote.

Caraway’s comments on several occasions brought much-needed levity to otherwise boring meetings, but longtime viewers of his show know the bulk of his rants were aimed solely at boosting his ego. Tolerating Caraway’s boisterous and lengthy speeches was a small price for his colleagues to pay for a potential favor down the road.

Vote-trading, unfortunately, is a common practice, but Caraway’s swap of his support for big-ticket projects like the Trinity toll road and convention center hotel for airtime say a lot about his values. He also made deals to earn the votes necessary to acquire the ceremonial roles of deputy mayor pro tem and mayor pro tem, appoint his preferred candidates to city boards, steer city contracts to friends, use housing funds to relocate and rebuild his favorite chicken shack, and pass a tax on plastic bags that generated lots of press coverage for him but was later repealed.

Caraway established a history of trading his votes for personal benefit, so it came as no surprise to city hall insiders when they learned he pocketed $450,000 in bribes for his role in causing the downfall of Dallas County Schools. 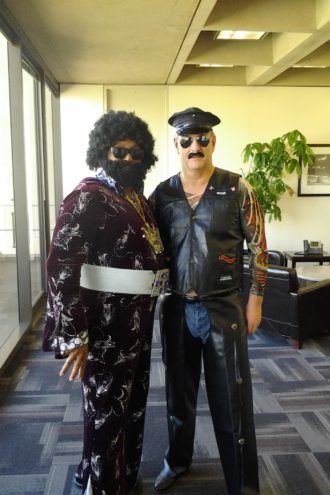 Caraway and Rawlings on Halloween.

Cameras aren’t allowed inside U.S. District Judge Barbara Lynn’s courtroom, but Friday afternoon represented the most important performance of Caraway’s life and perhaps the final episode of his show. A gallery packed with 80 onlookers waited with anticipation for the sentencing hearing that would determine how long Caraway would spend in federal prison for his crimes.

Two years after Caraway took office, Lynn sentenced former Mayor Pro Tem Don Hill to 18 years for selling his votes on affordable housing projects in exchange for bribes. The payments were disguised as consulting and construction contracts paid to his wife, friends and associates. Both men represented impoverished areas of Oak Cliff, were beloved in their community, drove BMWs, had mayoral aspirations and displayed an authentic love of the city. And when the FBI came knocking at their door, Caraway and Hill held the same jaw-dropping belief that they had done nothing wrong. That’s where their similarities end.

Despite overwhelming evidence against him, Hill, who was a lawyer, maintained his innocence until his death at age 65 in 2017, just one day after his early release from prison because of his terminal prostate cancer. Caraway took the opposite route. He sang like a bird to FBI agents without an attorney present, and when they explained to Caraway that he had just confessed to criminal activity, he became what the feds described as an “exemplary” witness.

Hill faced 75 years after a jury convicted him on seven charges, so the claim could be made that Lynn took it easy on him by sentencing him to 18 years. But it was a stiff penalty, particularly when compared to former state Rep. Terri Hodge, who received a one-year sentence after pleading guilty to her role in Hill’s case. Lynn sent two distinct messages with Hill’s sentence. Don’t take bribes, or else you could die in federal prison. And if you are selfish and dumb enough to take bribes, you better accept responsibility and cooperate, or again prepare to spend the rest of your life behind bars.

Somehow Caraway missed the first message, even though he watched as Hill’s life was ruined and his legacy forever marred by his crimes. But Caraway, who turns 67 later this month and suffers from health issues of his own, definitely received the second message, which opened up the possibility that he might live long enough to put his show back on the air.

Caraway faced two charges and a maximum of seven years in prison, but before his opportunity began to convince the judge to show him mercy and leniency, Lynn granted his attorney’s motion for a downward departure, causing subdued celebration among his supporters in the courtroom because it meant he would serve less than seven years. The amount of the reduction would now be determined by Caraway’s performance, which was preceded by testimony from three witnesses he chose to speak about his impact on their lives.

Khalil Coffield, a former city hall intern who now works for Oracle in Austin, credited Caraway with serving as a father figure and inspiring him become the first in his family to graduate college. Pearl Hicks, a longtime friend, said Caraway provided her with a pile of cash several years ago that prevented foreclosure of her home. The Rev. Donald Parish praised Caraway for personally apologizing to his congregation and helping tear down a hot-sheet motel near his church.

As Caraway made his way to the lectern and faced Lynn, he displayed a much calmer and reserved version of his persona, likely the result of coaching from his attorney. He lacked his usual confidence and his voice was shaky at times, but he found his footing after admitting to being embarrassed and ashamed, and expressing remorse for humiliating the city and his colleagues.

Caraway accepted full responsibility for his crimes, telling the judge, “We’re here today only because of me,” and turning toward the audience at one point to apologize to the friends and family he deceived. He referred to his crimes as “a mistake” and in true Caraway fashion issued an awkward metaphor to describe his actions. “I let the poison come underneath the door and into my nose,” he said.

Caraway ended his testimony by reminding Lynn that his cooperation ensured the city would not have to endure another painful trial. (Hill’s lasted three-and-a-half months.) “Why have a trial when all you have to do is tell the truth?” he asked rhetorically.

Lynn credited Caraway for avoiding a “bruising court battle” and said she received hundreds of letters and even a video that told stories about Caraway’s positive impact, which she referred to as “inspiring pieces of correspondence.” She acknowledged his efforts to mentor youth and shut down drug houses and seedy motels, but expressed her “disgust” by his conduct.

The judge criticized Caraway for spending the bribe money on gambling, trips and expensive clothes, which Lynn called “symptomatic of what people think about politicians,” and made it clear she did not agree with his characterization of his crimes as simply a mistake. “Something that goes on for six years is not a mistake,” she said, stressing that he repeatedly made himself “available to perform” in exchange for the bribes.

Lynn concluded her remarks by reading from two letters she received from Caraway’s former Roosevelt High School classmates. “I’m very disappointed in him,” the first letter said, while the second described temptation as “a true monster” and “a choice that must be managed.”

Onlookers began doing quick math when Lynn sentenced Caraway to 56 months. “Four years and eight months,” muttered Dominique Alexander, a young community activist sitting in the gallery with his head in his hands. Lynn also ordered Caraway to pay $565,774 in restitution and back taxes, and while she seemed hell-bent on sending him directly to prison, she gave him 30 more days of freedom to resolve a probate hearing tied to his father’s death.

Caraway appeared at peace with the compassionate sentencing from Lynn, who also granted his request to be placed in a Dallas-area prison because of his poor health. There’s also the possibility that Lynn will further reduce his sentence after he testifies in the case against developer Ruel Hamilton, who allegedly paid bribes to Caraway and former Councilmember Carolyn Davis.

Shortly after exiting the courtroom, Caraway tracked down a local NBC producer to complain that the station made him “look so dumb” when it interviewed him about his ties to the Dallas County Schools scandal. Then he exposed his comments in the hearing as fraudulent when he redirected the responsibility for his crimes to Larry Duncan, the former Dallas County Schools board president who served as the mastermind of the conspiracy.

Caraway perfectly fits the description of “hustler” given to him years ago by the Rev. Peter Johnson, and everyone knows it. This wasn’t his first time gaming the system. It was just the first time he was caught. Despite his clear shortcomings, Caraway managed to become a beloved figure throughout the city, but he betrayed us all because nobody loved Caraway more than he loved himself, and that was clear to anyone watching his show.

Now, much like Don Hill, Caraway must reconcile the possibility of learning about his mother’s death from a prison cell and wondering if he’ll meet the same fate before his release. He deserves credit for learning the second lesson from Hill’s sentence, but Caraway’s failure to learn the first one caused deep wounds in our city that will take decades to heal. He did some great things and was a hard person to dislike, but ultimately, as Lynn told him, there will be an asterisk on his tombstone that reads, “He was another bought-and-paid-for politician.”