Have you ever tried walking along Harry Hines near the Medical District? In reporting the feature for our January issue—titled “The Woman Who Fought the Sun,” it’s online today—I needed to see how bad this stretch, from Medical District Boulevard all the way past Inwood, is when you’re on two feet. The story is about the Texas Trees Foundation’s attempt to remake the Southwestern Medical District, one of our city’s untapped treasures, into a walkable neighborhood that attracts more housing and retail and bars and restaurants.

The complementary components are already there. UT Southwestern’s research holds its own next to any medical institution in the state, if not the nation. Parkland is the public hospital for the county. Children’s Health offers pediatric procedures that are largely unavailable elsewhere. Something like 3 million people come here to receive care each year. About 30,000 work here. And yet walking this area is a disaster. There are miles of missing sidewalks, many of which simply vanish. The tree canopy is just 7 percent, meaning concrete bakes under the sun and radiates outward. This was a warehouse and manufacturing district before the hospitals moved in, and the infrastructure hasn’t adapted.

The Texas Trees Foundation, a nonprofit that was started decades ago by Trammell Crow to stick trees along Woodall Rodgers, is the lead. They’re coming up with the design work, securing funding, and then handing it all over to the city to implement. It’s an interesting arrangement, and the feature is partly about the group’s history and why you should take them seriously.

But before you get to it, I’d like to take you on a walk down Harry Hines, the main artery of the district. It’ll help you understand why this needs to change.

Butler Street, an offshoot of Harry Hines, is the entrance to UT Southwestern. A dense patch of trees is to your immediate left, just north of the tower that houses its executives. This is manicured with healthy bushes that attract Monarch butterflies in the fall. The path into the campus is paved and defined and accented with another garden.

Contrast that with Harry Hines just across the street. Parking lots serve the purpose of sidewalks, taking you through Wendy’s, Mike Anderson’s Barbecue, and a lumber retailer. About a dozen people hang out in the sun on the pavement behind a DART stop. As you make your way toward Inwood, the sidewalks disappear, leaving you to walk on plush patches of overgrown grass. A cross made of spherical plywood rests against a tree, a marker of an accident; yellow and purple and red flowers are crudely tied to it.

The cloverleaf to Inwood rises slowly from the concrete. Harry Hines ascends, allowing drivers to pass over Inwood and its traffic to speed on below. If you’re on two feet, there is no sidewalk to get you to eastbound Inwood; you instead ascend the grassy median that separates you from exiting traffic. It slowly narrows to three feet wide and puts four dying trees in your path just for the hell of it. You’re forced to cross the street without so much as a yield sign. To walk onto Inwood from Harry Hines, it is far safer to cut through the parking lot of the nearby Salvation Army compound, which connects you to a field of paved parking lots that stretch ever east toward Cedar Springs. 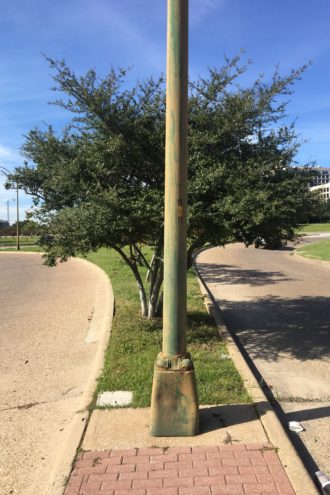 This is what you get if you try to walk onto Inwood from Harry Hines. (Photo by Matt Goodman)

Inwood keeps UT Southwestern’s south and north campuses bifurcated. As it stands, there is an enormous bridge that sits adjacent to Harry Hines for shuttle buses that move people to and from those campuses. It’s open to the public, but it’s not exactly functional if you don’t have business at the school; it connects to parking garages and office buildings and includes no other exits.

Much of the Medical District is like this. The hospitals built for their people, even though UT Southwestern often shares providers with Parkland and Children’s. None of this feels like a contiguous campus, even though it really should. That’s why what Texas Trees is doing is so exciting.

It is easy to find the failures here. But there is a part of this district that teases at what it could one day be. It is behind a parking garage (because of course it is). Most of the tree canopy here, not unlike the city of Dallas, is concentrated on the south side of the UT Southwestern campus. There is a wooded 3.5-acre bird sanctuary, and, yeah, the trails are muddy or torn up, but you can’t help but notice the sound of cars on nearby Inwood morph into ambient noise. The temperature feels like it drops by about 10 degrees. Egrets are chirping somewhere in the woods. The sound of cicadas get closer and closer as you walk the edges, and you see glimpses of the street but it’s over there, barely in view, only sneaking into vision through breaks in the trees.

The dirt trail takes you to a sitting area with three tan benches arranged in a semicircle. This is the UT Southwestern Memorial Garden. You keep following that path until it turns into a sidewalk. This takes you all the way to Inwood, where the trees are no longer above your head. The sidewalk reaches the street, then disappears.

But what if it didn’t? The feature is online now.