U.S. Senate hopeful Beto O’Rourke’s near miss might be grabbing the national headlines, but Dallas County’s Democratic Party is in high spirits on Wednesday. The party helped young Democrat Colin Allred unseat long-running Republican Congressman Pete Sessions, saw wins in key state senate races, and ushered in a run of Democrats within the judicial system that includes a return to a blue district attorney.

“The blue wave was definitely here,” declared the party’s county chair, Carol Donovan. “We swept practically every race we had.”

It was a night of upsets. Allred, an attorney and former NFL player, knocked off Sessions, a name that’s become synonymous with North Texas politics, whose run in Congress dated back to 1997. “You believed in us when all the pundits didn’t,” Allred told his watch party at Dallas’ Magnolia Hotel Park Cities.

In a race we noted could be key for Democrats, Julie Johnson (D) knocked of D-115 incumbent Matt Rinaldi (R) by a sizable 56.7 percent to 43.3 percent margin. And, in one that Dallas County Republican Chair Missy Shorey singled out as one of the biggest surprises, Ana-Maria Ramos (D) took the seat from D-102’s Linda Koop (R), who Shorey called “an outstanding representative.” Those suburban districts span Irving, Addison, and Richardson. Overall, five seats in the Texas house turned blue among 11 flips across the state. 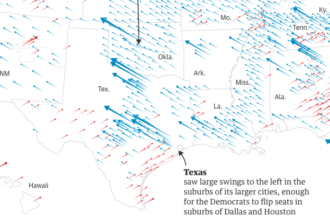 Shorey says the party will take time to reflect, assess what went wrong, and look at “how we address the needs of voters going forward.” She credited the grassroots efforts of the Republican party toward uniting voters, referencing the D Magazine story about that impossible task. And she said that she will be getting to work. “I’m not crying, I’m not protesting, and I’m not marching in the streets,” said Shorey.

In the DA race, Republican incumbent Faith Johnson’s tenure came to an abrupt end, after she was appointed to the position by Gov. Greg Abbott in late 2016. She replaced Republican Susan Hawk, who defeated Craig Watkins but stepped down to address her mental health. She was largely absent from her office, and Johnson has been credited with bringing stability back to the office. She’d also stepped in front of news cameras multiple times in recent months, including after securing a conviction of a police officer who shot and killed 15-year-old Balch Springs teenager Jordan Edwards.

She ran against the reform-minded John Creuzot, a former judge, who now takes over with an agenda to shorten or eliminate jail time for lesser crimes like small-scale marijuana possession. As a judge in Dallas County, Creuzot pioneered a diversion court for certain offenders with no prior record. “He continues to believe in the ideal of second chances on crimes that don’t endanger the people of Dallas County,” Donovan said. During a phone call Wednesday morning, Creuzot’s was the first victory she highlighted.

Another big swing she pointed toward: the justices of the 5th Court of Appeals District, which encompasses Grayson, Collin, Hunt, Rockwall, Dallas, and Kaufman counties. All eight spots up for grabs went to Democrats. It was previously an all-Republican bench, and the local Democratic party branded the judges as the Slate of Eight. “We knew it would be a long shot since we had to get the cooperation from multiple counties,” said Donovan.

In a nonpartisan portion of the ballot, Dallas ISD went four for four, including a Prop C victory in which voters passed a Tax Ratification Election. It’ll help the district continue to put money into programs that have fueled a turnaround, allowing more choices and better teachers for students in economically challenging situations. “We put this on the ballot when there would be a huge voter turnout,” Superintendent Michael Hinojosa said before the election. “Other districts have tried to do it on non-uniform election days. We’re trying to be transparent.” Similar tax increases were approved for Richardson and Collin County ISDs.

Meanwhile, the 13-person race for Dwaine Caraway’s spot on the Dallas City Council is headed to a runoff between former Council Member Carolyn King Arnold and 28-year-old activist Keyaira Saunders.

Turnout played a key role in it all. For that, Donovan credited the Trump effect. And, despite the loss, O’Rourke’s presence was felt.

“I was talking to one of my colleagues and they said if Beto hadn’t run here, there wouldn’t be these wins,” Shorey said. “They’re absolutely right.”