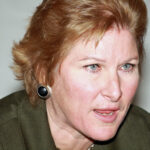 Bushies like former presidential counselor Karen Hughes, however, contend that Medicare Part D was long overdue–not evidence of profligate spending. During the 2000 campaign, Hughes said before today’s event, Bush listened to many stories about seniors having to choose between food and medicine; now, she said, you don’t hear those stories anymore. Besides that, she added, the reform had long been called for by Democrats and Republicans alike.

“I do think when Republicans controlled Congress, there was excessive spending added on to bills, so the president had to make some difficult [veto] decisions …” said Hughes (pictured in photo by Jeanne Prejean). “So that’s a good lesson for the next Congress. Republicans need to get serious [about spending]. I think it would be a healthy reform to get rid of earmarks. Government is too big, I have to agree. But I disagree about the [prescription-drug entitlement]. … It was a successful program, and everybody benefits.”