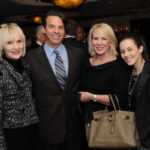 One commercial real estate powerhouse who attended, a knockout blonde, was heard telling a group: “I’m though with dating. There isn’t an eligible single man left in Dallas who has a job.”

(So much for the economic recovery, I guess.)

Meantime, former Neiman Marcus exec Tony Briggle was regaling another throng with this one on Stanley Marcus’ mother “Miss Minnie” Marcus, who at the time of the story was in her 90s:

When Mr. Stanley’s wife Billie died, it seems, the family summoned Sparkman Hillcrest Funeral Home, which sent some men out to what they thought was Stanley’s house.

But they mistakenly showed up instead at Miss Minnie’s, which was nearby.

When they told her they were there “from Sparkman Hillcrest, for Mrs. Marcus,” Miss Minnie drew back and cried: “I’m not ready yet!”

Erin, by the way, is not the knockout blonde referenced earlier; Erin’s in high-end residential real estate, not commercial.

Though she is a knockout. Matter of fact, she left the party early to attend her weekly kick-boxing class.