In mid-March, Plano’s popular Holy Grail Pub was preparing for the busiest weekend in the busiest month of its year. St. Patrick’s Day was here. But so was the coronavirus.

“It escalated so quickly. We were told, ‘It was nothing, it was nothing,’ then—boom—it was everything,” says Brian Rudolph, who owns the pub with his wife, Christi.

The restaurant industry is Texas’ second largest private sector employer, counting at least 1.2 million workers. Industry surveys show that nearly two thirds of those workers have been laid off or furloughed since the pandemic. Restaurants are not making enough to cover payroll, rent, taxes, and myriad bills that remain. The federal government rolled out a relief program, but much of it missed the smallest businesses, threatening the future of Dallas’ hospitality sector.

The Coronavirus Aid Relief Economic Security (CARES) Act, a $2 trillion economic relief package, was signed into law on March 27. The CARES Act included the Paycheck Protection Program (PPP), a $349 billion fund to help keep small businesses like Holy Grail Pub afloat during the pandemic. The program allows small businesses—specifically, those with 500 or fewer employees—to receive a forgivable loan equal to two and a half times the company’s average monthly payroll costs. The loan will be forgiven if the business uses at least 75 percent of it for payroll costs.

The PPP ran out of money in just under 14 days.

A little less than 9 percent of PPP loans went to the accommodation and food service subsector (few of which are truly independent restaurants), according to the most recent Paycheck Protection Program Report. However, it’s an industry that’s suffered the greatest amount of job losses. The National Restaurant Association estimates that more than 688,000 restaurant employees in Texas have been laid off or furloughed since the beginning of the coronavirus outbreak. That’s 61 percent of the state’s food industry workers.

In Texas, “84 percent of restaurant operators say they have laid off or furloughed employees,” says a recent National Restaurant Association survey. And according to U.S. Dept. of Labor’s Bureau of Labor Statistics, about 60 percent of the jobs lost in March were from restaurants and bars.

As of the latest accounting on April 16, Texas received 135,000 loans worth $28.5 billion. That’s the most of any state. But it’s unclear how much went directly to the hospitality industry, specifically smaller operators. It basically allows the employers to provide dollars directly to their staffs and little else, without them having to file for unemployment from the government.

Jason Morgan, CEO of the Original ChopShop and Bellagreen salad chains, received $1.5 million in PPP loans for each of his brands. Of his 23 locations, 15 are in Texas and nine of those are in the Dallas-Fort Worth area. With the new money, Bellagreen in Plano reopened its doors last Wednesday. Morgan benefitted from his existing relationship with his bank-lender. Many hopeful applicants reported trouble getting through if they didn’t have that same relationship. 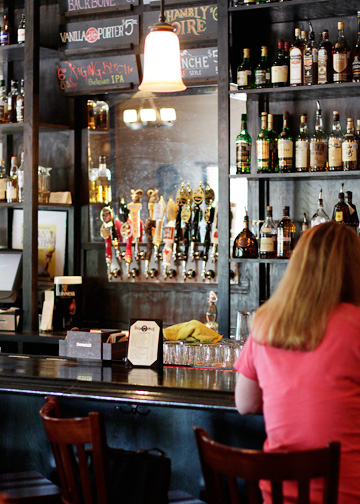 “We heard a lot of people had trouble with the application process,” says Morgan. “We didn’t have that problem at all.” Its loan was approved three to four days after submitting the application in early April. The money arrived last week.

“We’re gonna bring everyone back, staff completely, find things for people to do, use hours to hand out flyers, curbside delivery, internal delivery [without third party services],” he said. “We’re gonna find a reason to have the people in the building.”

But for others, opines Shane Spillers, owner of Eno’s Pizza Tavern locations in Bishop Arts, Forney, and Coppell, “it’s super hard to justify bringing back employees to do a job that doesn’t exist anymore… For a lot of the businesses that are most impacted by this to actually achieve the level of forgiveness requirements to actually have that loan forgiven.”

The Holy Grail Pub had 29 employees. “I’m paying six, that’s what I could afford,” Brian Rudolph says. Their application process wasn’t as smooth as Bellagreen’s.

He wanted to apply immediately so he contacted his bank, Capitol One, to get things rolling. There were miscommunications about which forms to fill out. The bank promised to set up a portal for him to submit his application. He called every day until the bank was ready for him to file. When he did send in his application, it only took a day to get approval. Then the fund ran out of money.

“I’ve been told we’re in queue,” he says.  “We’ve had to tap into my life insurance policy in order to stay liquid—and we’ll make it through. It’s gonna suck to spend a couple years digging out.”

Large chains were able to cash in while small and independent restaurants and bars were left behind. Of the PPP loans, six national chains received $81 million, reports Business Insider. (One of those, Shake Shack, returned its $10 million loan.)

“We’ve had to tap into my life insurance policy in order to stay liquid—and we’ll make it through.”

In the short-term, local and state governments have begun experimenting with ways to help. Texas Rep. Rafael Anchia, D-Dallas, proposed that aid should be coupled with immediate action to improve stability: eviction delays, prohibition of utility shut-offs, tax credits.

“The short depletion of the PPP [shows] the need was even greater than congress anticipated,” says Anchia. “There should be enough money to meet the need, so we’ll need a fourth stimulus.”

Another round of PPP loans worth $310 billion were approved on April 21, with $60 billion reserved for smaller banks and community-based lenders, which presumably will give businesses previously left out a better chance of receiving financial relief. (It’s not yet signed into law and there’s no clear timeline as of press time.)

“It would allow for cash flow. Cash is king during the pandemic,” Anchia says. “So affording restaurants more cash flow in the short term may give them the type of lifeline they need to stay solvent until some semblance of the economy comes back online.”

Dallas is, like so many American cities right now, part of a larger culinary movement that cherishes its unabashedly independent restaurants and bars. What put Dallas on the national radar were the visionary chefs who spoke through their food and the unique experiences they provided to diners. It felt like we had arrived.

But it’s small, indie restaurants that make our culinary scene so vibrant. Rudolph wonders “what the landscape is gonna look like afterwards. I hear optimism from friends. Is it bravado? I have a feeling it is.”

Scenes from the Dallas Chocolate Festival