Just two-thirds of the way through the first quarter of 2020, the Dallas-Fort Worth (DFW) office market was moving along at a brisk clip, indicative of what we had grown accustomed to seeing over the past five-plus years. 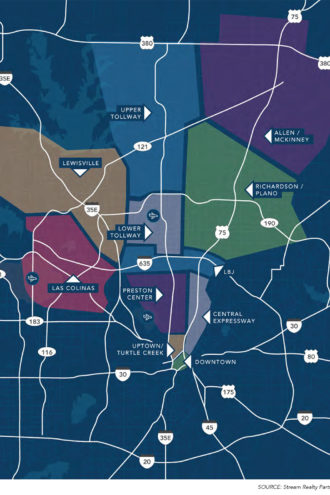 The Dallas office market was as healthy as it had ever been, and the fundamentals were sound. As written numerous times in Stream’s previous Quarters, the only possible headwinds to this strong long-term recovery would have to be an external, global influence. As we all know, that is exactly what happened.

In unprecedented fashion, the coronavirus pandemic ground the entire country and its economy to a halt. The Dallas office market is no exception. Only a small percentage of deals that were in the works moved forward, with many put on hold and some opting for short-term extensions in their current buildings.

For the most part, only tenants that had to make a decision have done so. The remaining companies are in a wait-and-see mode, trying to determine how this “new normal” will affect their long- and short-term real estate needs. 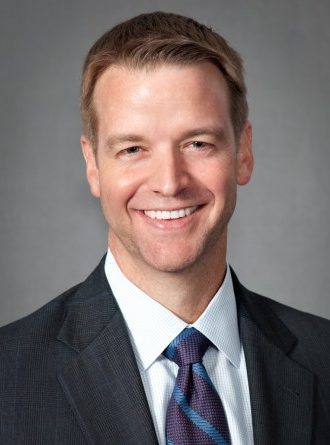 When looking at the DFW office market’s performance for the first quarter, it is important to note that, due to the lagging-indicator nature of tracking market performance, none of the first quarter’s stats were affected by this pandemic. Stream does not expect to see the pandemic’s effect on notable trends in absorption, vacancy, and rental rates until likely the third and fourth quarters. That said, this was a relatively flat quarter for the DFW office market, with the market witnessing a paltry 159,000 square feet of positive absorption.

Bucking a trend witnessed the past three to four years, Class B absorption outpaced Class A absorption. In fact, Class A space finished the quarter by giving 90,000 square feet back to the market, which marks the first quarter the Class A sector has seen negative absorption since early 2018 and only the second time in the past five years. These numbers are somewhat surprising given the flight-to-quality the market has experienced, especially of late. It will be interesting to see if this negative absorption was just an anomaly or the beginning of a new trend.

One very bright spot was the performance of the Lower Tollway submarket, which led all DFW submarkets with 578,000 square feet of positive absorption.

Due to numerous large tenant move-ins and expansions, Class A vacancy in the submarket dropped almost three percent to 15.6 percent. We expect these Lower Tollway numbers to continue to improve, as a significant number of large leases were signed in the latter part of 2019 and early 2020. 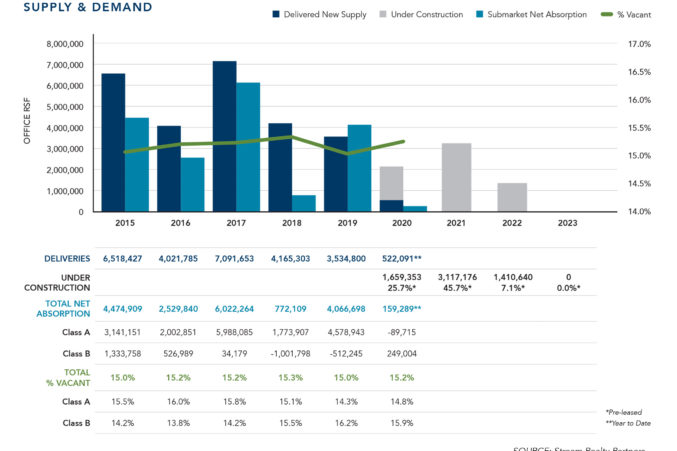 During the first quarter, rental rates continued to hold steady at $28.59 per square foot, full-service, across all classes. 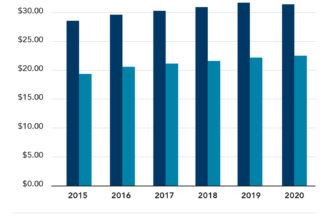 Couple the current lack of demand due to COVID-19 with the fact that approximately 1.4 million square feet of spec space (which is five percent pre-leased) is slated to deliver in 2020, and the recipe is likely climbing vacancy rates and eventually, a following rental rate adjustment.

As we look forward to the remainder of 2020, there are too many unknowns and variables to estimate how the market will be affected during the short and long term. Businesses will ultimately re-open, but this will likely be a gradual process.

Questions have been raised on how the pandemic will affect office densities, staggered employee work schedules, work-from-home programs, and the like. Stream anticipates 2020 will be an adjustment year, as companies try various strategies to become efficient while keeping employees safe until this crisis subsides.

As far as the long-term impacts of COVID-19 on the DFW office market, it is simply too early to tell.

One thing is certain—the people of DFW and its commercial real estate market have always been resilient. In the past, every time the market took a hit, it has come back stronger than before during the subsequent recovery. In the immortal words of Abraham Lincoln, “This too, shall pass…”.