Westdale Real Estate and StreetLights Residential have drawn out plans for their third joint project in Dallas’ Deep Ellum.

Plans filed with the Dallas Landmark Commission reveal that the developers are planning a four-story building along Canton at Crowdus streets and a 17-story apartment tower next to the elevated highway behind the Adam Hats Building.

The two real estate firms built the 17-story Case Building apartments on Main and Hall streets and teamed up on the 8-acre Epic development in Deep Ellum–StreetLights is building a 26-story apartment tower called the Hamilton as part of the Epic project. 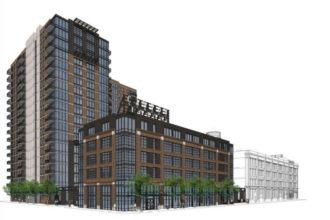 The Canton Street Lofts would be built next to the historic Adam Hats Building.(StreetLIghts Residential)

In 1996, Westdale redeveloped the former commercial building into 90 loft-style apartments. The more than century-old building started out as a manufacturing plant for the Ford Motor Co.

The four-story Canton Street Building, “will be primarily clad in brick masonry with cast stone detailing, and partially clad with metal panels. The overall design is intended to be a contemporary interpretation of the Adam Hats building design. The historic structure inspires the horizontal bands of casement windows and the vertical masonry elements with cast stone. A rooftop sign, inspired by the billboards on the historic structure, is also proposed,” according to city documents.

Behind that, a 17-story apartment tower would be built next to the elevated highway behind the Adam Hats Building.

A rooftop sign, inspired by the billboards on the historic structure, is also proposed.

The area between the Adam Hats building and this new construction is intended to be a courtyard for the tenants of the buildings.

At the southwest corner of the block will be a five-level parking garage that is also connected to the 17-story structure.

The City’s landmark commission will have a courtesy review of the project at its 11:30 a.m. meeting Feb. 3. Click here to read the agenda.