If Joshua Ray Walker could have his way, his live solo shows would be just that: solo.

There would be no band accompanying him and his acoustic guitar. The audience banter between songs would be short enough to distract him from stage fright. There certainly would not be an encore.

The country musician usually keeps it simple because he can. His finger picking is excellent and his voice is preternatural.

Why distract from that when his falsetto alone has surely caused for mid-show Spotify searches when he’s opened for bigger artists?

But such a stripped down performance was not an option for Walker’s concert at the Granada Theater last Friday. It was an album-release show for his third project, See You Next Time, a record that could very well take him to another tier of fame.

From the Casa Linda neighborhood of East Dallas, the 30-year-old has been performing all over Dallas since he was 13, most often in the smallest of venues or cleared out corners of dive bars. Critical reception of his first album, Wish You Were Here, labeled him as a Dallas musician to look out for, and his sophomore release, Glad You Made It, extended that claim to all of Texas. But they were released the year before a pandemic and in the middle of lockdown, respectively, with little way for Walker to capitalize on his impressed critics. His third release arrived with legitimate anticipation from actual fans and will be accompanied by a national tour.

The Granada show was to be an event. And so Walker walked confidently on stage wearing a cowboy hat and a blue blazer lined near the collar with yellow roses and a black lapel. Already there waiting for him were a bassist, drummer, pedal steel guitarist, and electric guitarist. He went through a setlist of songs audience members would call out within their first riffs, as if his catalog was a greatest hits playlist. Throughout the night, they indulged each of his perfectly-timed vocal flourishes with mid-song cheers.

Joshua Ray Walker isn’t quite yet a star, except maybe in Dallas, the place he’s lived his entire life and the city with the largest collection of people who are more or less certain that, if there still is or ever was any justice in the music industry, he will be one very soon. If Friday’s show was evidence of anything, it’s that he’s ready to play the part.

“I see a lot of faces of people who have supported me for years,” Walker said before playing “Fondly,” the first song he ever wrote.

It was a good description of the crowd; some Dallas musicians who really do know him but mostly fans who just feel like they do through his music. Walker hasn’t played many venues that would be considered large and he’s headlined even fewer, but you could easily fill American Airlines Center with people who have seen him play in dive bars, cafes, and tiny venues all over Dallas during his career.

Walker first got a little buzz in 2012 when he became the lead guitarist of the Dallas band the Ottoman Turks, led by his childhood friend Nathan Wells. A raucous country-rock band whose performances could provide the catchiest possible soundtrack to an East Dallas bar fight (a vibe that is immediately betrayed by spending any time with them after a show and discovering all four are comically kind people who might have trouble hanging up on a telemarketer). The band allowed Walker to show off his electric guitar skills, the instrument looking small draped upon his large stature. He usually stands still during Ottoman Turks performances while Wells puts a marathon’s worth of energy into his performance and the bar sells a lot of beer.

But Walker was writing his own character-driven songs as well—clever, funny, layered, devastating songs—and playing them on weekdays wherever he could. Eventually with the help of Dallas producer John Pedigo, he signed with State Fair Records and cut a debut album in 2019. (The record label signed the Ottoman Turks to a separate deal later that year). 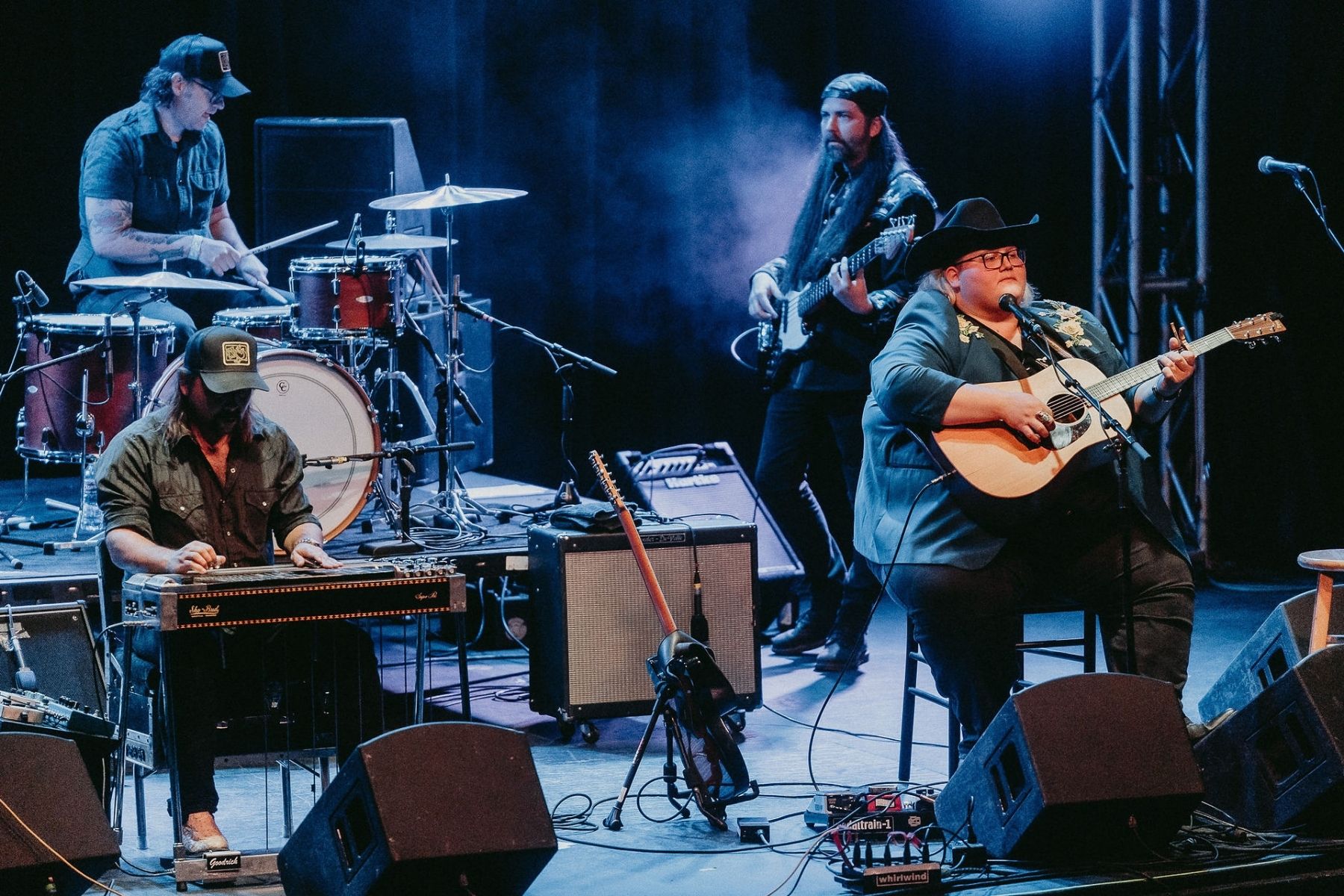 The day after the Granada show, Walker played the State Fair during the Red River Shootout between Texas and Oklahoma. Instead of playing the fair’s main stage, Walker’s label strategically placed him at a smaller stage, just near the steps to enter the Cotton Bowl, where foot traffic from thousands of people, rowdy or otherwise, would pass by. For some it’d be a nightmare stage, your music drowned out by the scene.

But Walker’s voice is truly that arresting. It causes pause regardless of one’s intentions, intoxication, or musical proclivity. That he sent new fans back to Austin and Norman was a safer bet than the point spread on the game.

To the audience at the Granada 15 hours earlier, that voice was its own kind of intoxicating, smooth and astonishingly wide ranging, even to those who have heard it before. As he sang, “When you’re gone and I’m waiting, I’ll be useful, I’ll make you proud,” from the song “Lot Lizard” about two longhaul truckers, he had the crowd in a sort of hypnotic state, seemingly aware that his voice was about to kick up another octave to belt out “save my soul.”

Predicting which artists will have national success—get radio play, chart songs, garner millions of streams—is an exercise for bullshitters or people unwilling to admit they have their fingers on the scale. If Walker’s at a crossroads of greater success, his Granada show is less an indicator that he’ll break through and more a statement that he’s ready for it. It was hard to leave the venue not talking about Walker’s future, but the night was really about his past. He’s played nearly a thousand shows in Dallas in his life. He once fought to get a residency at a now-closed TGI Friday’s. More people than the Granada could hold have seen him play one of his countless shows just down Lower Greenville at Single Wide, which is smaller than the Granada’s lobby. Friday’s show was a culmination of all of that.

To some, Walker and his music have a certain reputation (one not entirely unowed to a profile I wrote about him for Texas Monthly). It would suggest that he’s a brooding musician who makes brooding, “authentic” music tailored toward people who talk about their record collections more than they listen to them. But to whatever degree he represents the characters who make up the grimiest corners of Dallas—the low lifes, the schemers pretending to be high rollers, the high rollers pretending to be cowboys, the people of any demographic who will feel a jolt of loneliness the moment the bar closes—his audiences have fun at his shows. Walker’s characters might bring a lot of baggage to the party, but they always show up to the party. That’s a quality as authentic as anything else about his music.

“Sexy After Dark,” the lead single off of See You Next Time, is a bombastic anthem to that point. The most danceable song in his catalog, it’s a clear statement that he’s more than a guy with guitar and a stool and a couple sad songs (of which there are no shortage in Dallas and practically makes up its own demographic in Austin). Walker’s penultimate song Friday was a devastatingly sad tune called “Flash Paper.” But he only let the song’s closing lines linger for a few seconds.

Then the lights got a little brighter. The pedal steel boomed triumphantly, and as Walker’s voice filled the room with “I feel sexy after dark. My conscience finds it hard to see” various members of Walker’s circle got on stage to dance to an extended version of the song, led front and center by Wells of the Ottoman Turks, who for years has carried that frontman energy for Walker while he built up his own confidence and stage presence.

Without an instrument or a microphone, Wells danced with the sort of a goofy confidence that only a local rockstar can pull off. Walker didn’t get up from his stool. He sat there, in his colorful blazer, smiling and singing to a crowd that had already followed Wells’ cue.

When the song ended, he’d played over an hour’s worth of music for his friends. In his city. After the show, when he wrapped up meeting fans and signing autographs, he met the rest of the Ottoman Turks at Lakewood Landing.