Fort Worth’s third annual Fortress Festival is officially over, and, if you’re like us, you woke up Monday morning with sore calves, hitting snooze on the alarm. Unlike most music festivals, two days free of overlapping set times meant you could make all the bands, with no strategic planning or prioritization necessary. So, aside from stopping at the Vegan Village for corn dogs and getting a late start on Sunday, we did.

It was the first time that the locally grown festival sold out, bringing 14,000 attendees to Fort Worth to see an array of musicians like The Bright Light Social Hour, Chvrches, Rae Sremmurd and Leon Bridges.

Cardiac the Ghost got things started off on Saturday. Through the gates of the outdoor venue at Will Rogers Memorial Stadium, the sun glared over a sparse audience ten minutes before the Dallas rapper was set to perform. 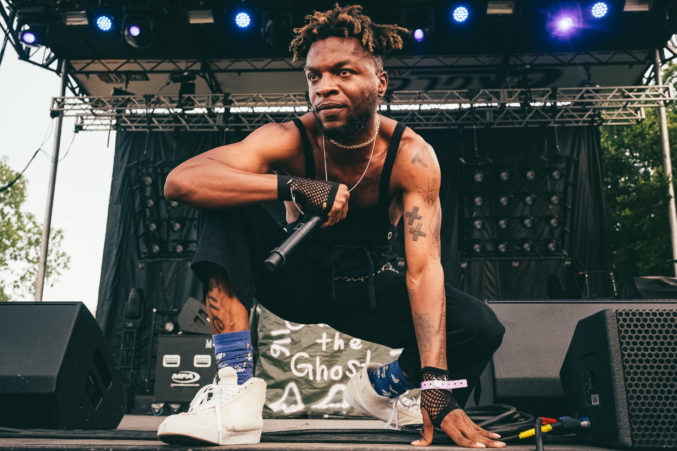 Styled by his girlfriend in a fit to match his commanding presence, the rapper wore belted silver chains around a loose-fit black jumper with no undershirt. Gripping his mic with fingerless fishnet gloves, he jumped off the stage to sing from the mosh pit he had formed on the lawn. It was surprising to hear that this was his biggest audience yet. Opening a festival is hard, and Cardiac pulled it off with an energy that made it seem easy.

A few acts later, Bobby Sessions used his set time to make a political statement. Pretending to take a bullet in the middle of his performance, he braced the audience.

“Now I’m gonna be your personal tour guide through the black neighborhood,” Sessions said as his introduction.

In an ode to his cousin James Harper, who was tragically killed by law enforcement, he asked the audience to raise two fists as he began freestyling without a backtrack. Before rushing over to make his own set at the other stage, Medicine Man Revival’s Keite Young graced the audience with his gospel voice to sing his part in Sessions’ title track from the 2018 movie The Hate U Give.

The latter half of the night started with R&B artist Tinashe owning the stage, reminding the audience that summer is a mentality that can be worn all year. 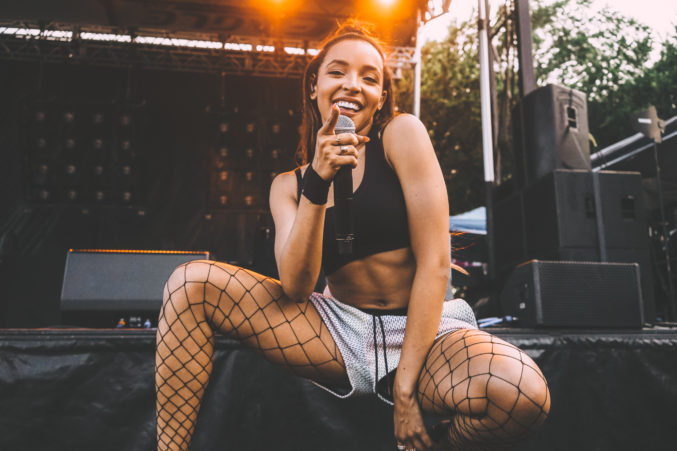 On the other side of the fest, we were struck by the insatiable energy and sound of Houston-based duo Gia Chamba. The effortlessly bilingual performance of latin hip-hop electronica was accompanied by a remarkably passionate performance on the bongos. And everyone was vibing it.

As soon as Rae Sremmurd’s No Type could be heard on the Main Stage, the noise in the Fortress gates reached an all time high. With the hip-hop duo’s Gucci aura, it made sense they would pop two bottles of champagne over the audience. It was more surprising when they waved a group of boys on stage who looked no older than 10. They stayed up there, some owning it, some awkwardly dancing, all adorable finishing out the last song.

On Sunday, the start of Sailor Poon’s set felt like the perfect way to begin day two of Fortress Festival. Lead vocalist Billie Buck mused her saxophone to match the band’s sultry tone, steeped in feminist punk rock. We exchanged humorous glances as bathroom profanities became the obscene queens’ subject matter, but we jammed out anyway. 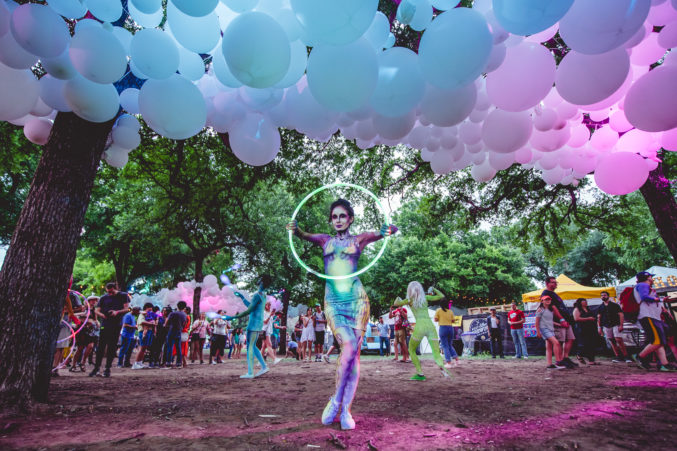 Dickie’s Main Stage came alive with New Orleans band Tank and the Bangas spinning a saxophone with green perspective from their latest album Green Balloon. Camo’d out with eclectic fortitude, the crowd adopted their playful tones singing back their favorite hooks.

After the lovely riffs and dips set to psychedelic funk from Khruangbin, Abhi the Nomad pressed his views into his raps, layered with high energy and the hope that blessings may follow our sins.

Night fell the second time we left the lawn of Seagram’s 7 stage. Just a few steps over to the  lawn in front of the main stage, woven mandalas and quilts patched its jade blades, still slick from April showers. You couldn’t complain about the weather; the morning rain made the night air steamy, and a friendly breeze kept rolling through, a familiar Texas night to appreciate. Maybe it was the booze, or the stretches Tank made the crowd do earlier, but people smiled more after the sunset.

As soft funky jazz played from the stage, the best view seemed to be along the back, with space to dance and people watch between songs. 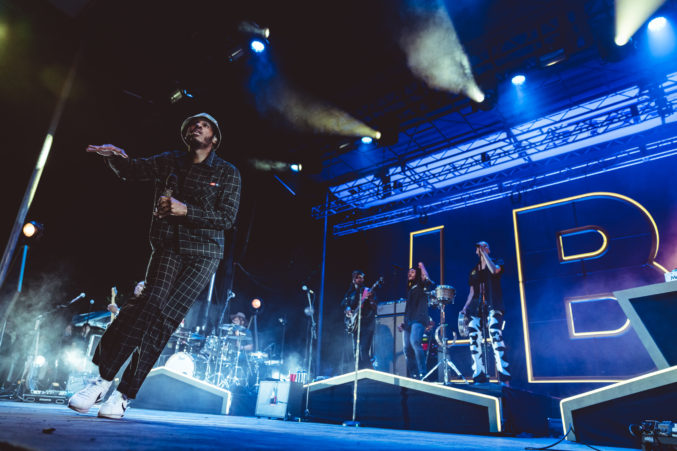 Long awaited, Leon Bridges finally took the stage. Sitting in Vegan Village, we spotted his camo bucket hat from across the way before sundown earlier. Taking every liberty for a dance break, his hips turned, popping and locking his shoulders as he moved with the band. Between funky melodies, they sprouted a southern soulful tone, like coming home. You could tell that Bridges felt his welcome on the stage, igniting the city with a set that went over half of its time.

When you’re headlining your hometown, the rules are merely suggestions.