Welcome to the weekend. I know you’ve been waiting for this moment for all your life. Or the last few days. It’s going to be worth it, though, because this weekend is a good one in Dallas. There’s EarthX, billed as the world’s largest environmental experience, in Fair Park. That includes some cool films, conferences, and educational events. There’s Art Ball, which is the Dallas Museum of Art’s main annual fundraiser and a swanky good time. Please don’t damage the concrete steps this year. It looks like we’ve avoided cranes falling into the building, at least. There’s Taco Libre, which will be less swanky but probably more delicious. Finally, there’s the third annual Fortress Festival. Rae Sremmurd, Tinashe, and Chvrches are coming to town for it, but Leon Bridges’ homecoming is the most exciting part. Another exciting act to watch for: Dallas’ own Cardiac the Ghost. I interviewed him ahead of his performance, and you can read that below. If you’re just trying to make weekend plans, see our Things To Do page here. Otherwise, let’s chat with Cardiac.

It was raining buckets on Wednesday night when I met up with Dallas rapper Cardiac the Ghost and his girlfriend, Shaya, at Merit Coffee in Deep Ellum. By the time I found a parking spot and splashed my way into the trendy shop, the pair was already cozy in a booth with a mug of coffee and a bottle of Topo Chico. Donning a simple, all-black uniform of jeans, boots, and a satin varsity jacket, the 26-year-old first seemed a bit more reserved than his musical persona would suggest.

As an artist, Cardiac is unabashedly eccentric. He says his music falls into the sub genre of freemo, “like screamo but free emotion.” He introduced the experimental style of hip-hop with his first album, 2018’s 1%. He has a second album, Pink Clouds, ready to drop “any day now,” though he declines to specify any day in particular we can expect it. What we can expect is the rapper’s festival debut this weekend in Fort Worth. He’s joining a lineup with Leon Bridges, Bobby Sessions, and Rae Sremmurd at the third annual Fortress Festival.

“It’s gonna be crazy. It’s gonna be like a dream to me, and it’s gonna be cool. I’m just gonna do me and have fun and be myself and not be afraid to interact with whoever, especially the crowd,” he says.

His performance at Fortress will include the debut of several songs from Pink Clouds, a robust, 32-track album which is intended to carry listeners through a spectrum of emotions.

“I feel like this new album was more for me, and it was to get me somewhere mentally, and when I finally finished all the songs and listened to them, everything started to change for me because all the noises started to make a space, you know? I went for new sounds that were inside instead of things I’ve heard,” he says. “I was really trying to push the barrier and create more sounds, and I think it’s really fun.”

The record features Tay-K, the viral 18-year-old rapper from Arlington who is currently incarcerated in a maximum security prison as he awaits trial for two murder charges.

“Free Tay-K!” Cardiac started speaking into the recorder on the table like a walkie talkie. “Keep your head up. In my dimension you’re already out. We know what’s up. Money for bail, you feel me?”

We wrapped up the interview, but my job here is not done. Cardiac and Shaya both agreed that he doesn’t have any good photos. I need a photo for this story. So, a five minute shoot ensues. Cardiac volunteers himself to puddle jump for some action shots. 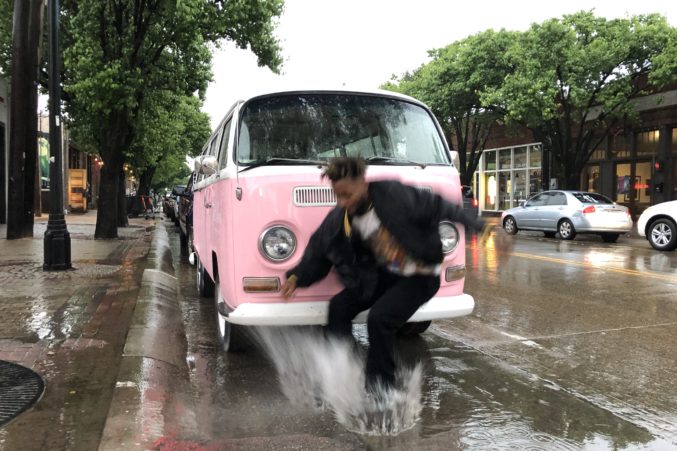 After he leaps into a small pool in the street, there’s an extra splash half a second later. Without missing a beat, he retrieves a water-logged iPhone and hands it to Shaya for safe keeping. “Put it in rice!” he half-jokes.

“That phone right there–that’s the reason my first album was called 1%.”

See Cardiac the Ghost play at Fortress Festival this Saturday, April 27 at 3 p.m.