Joan Davidow Returns to the Dallas Art World with Site 131

The former Dallas Contemporary director and her son operate the new gallery in the Design District.
By Peter Simek | March 2, 2016|8:00 am
Advertisement
Seth Davidow remembers being dragged around to art openings from a young age. After all, his mother, former Dallas Contemporary director Joan Davidow, is one of the most dedicated and longtime participants in the Dallas art scene. Now they have embarked on a new artistic journey together. Late last year they opened Site 131, a pristine white-cube gallery carved out of a 1950s warehouse a block from the Trinity River, in the Design District. It marks Joan Davidow’s return to curating after a six-year hiatus.

Where did the idea for Site 131 come from?
SETH DAVIDOW: The intent of buying the building was the start of what I do, which is real estate. And I always intended to re-purpose the property, but I wasn’t sure as what. We always spend a day or a portion of a day in Miami for Art Basel. So a couple of years ago we had walked through the NADA fair, and I had the idea to do what this has become with Mom. And I just floated it to her: “What do you think of us doing an art space together that is nonprofit? You run things, and I’ll help where I can.” And it will give Mom an opportunity and a venue to do what she loves, and give us an opportunity to do something together.
JOAN DAVIDOW: And you wanted to fine-tune your own eye.
SETH: She has always been more passionate about emerging artists, or artists that aren’t the ones that everyone knows or appreciates, and she has a good eye for it and it is her passion. And so that was the idea, that we would show work by new artists or artists that were under-recognized.

Joan, what was your first reaction to Seth’s idea?
JOAN: To do this in my lifetime, with my son? Wow! But then I got scared, because there has been this interim since I had been doing it regularly. But I think it is like riding a bike. It is not like I had stopped looking or thinking.

Did you have a sense of what kind of space you wanted to create?
JOAN: It has turned out that it is a two-year experiment, because it is more costly than we both imagined.
SETH: By far.
JOAN: I thought I would do it just like Karen [Weiner, who runs The Reading Room]. I’ll have a little chair and a little table and little bathroom, and I’ll sit on Saturdays when I’m in town. Seth had a different idea.
SETH: Mom’s utilitarian, minimalistic, and not concerned about being fancy and all of that. And I thought if we are going to do it, let’s do something that is more substantial. I’m willing to dedicate more space to it, and I’m definitely guilty of building it out much more than Mom would have.

How did the curatorial focus take shape?
JOAN: I came up with the idea of “Here, There, and Beyond.” That we would do Texas, national, and international artists. And that has always been my goal. In the beginning it was about pairings. But the space is so large, it can handle more than two artists. So it is pairs or trios or quads of artists dealing with a similar concern or a similar issue.

Are you trying to fill a void with regard to what kinds of art spaces are in Dallas?
JOAN: I do feel that I am doing something here that isn’t happening elsewhere in town. For the opening, there were over 300 people here, and I did what comes so naturally to me, which is: let’s look at a piece of art and talk about it together. I introduced the artists, and then I said, “Let’s talk about the art.” And I stood in front of one of Marjorie [Schwarz]’s pieces, and I asked questions. I kept the discussion going for about five minutes. And we did it with everybody there.

Is that educational approach part of why you decided to open a nonprofit art space?
SETH: Yes, it is something for us to do together, but it is for the community. I’m fortunate that I was exposed to art and contemporary art from a young age, and I grew up learning how to appreciate it. Many people are interested in art, and yet they don’t have a connection that will make it touchable, consumable. We’ve talked about education, not just geared toward young people but also education for adults. Not formal education, though I suppose it could be. But making an environment where it is easy to learn and be exposed.
JOAN: Here we are. Accessible. We want you to learn about it, know about it. We are giving you an opportunity to learn about it and to have fun with it. And it’s our goal to get kids in here that don’t have a chance to see this kind of work. But also adults. We want the sports stars in here.

A version of this Q&A appears in the March issue of D Magazine. 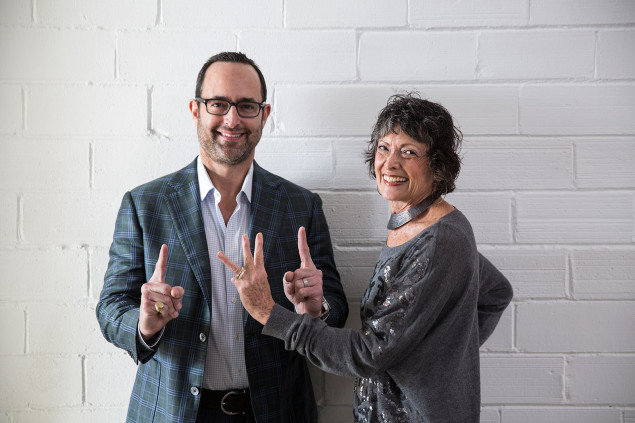