With funding problems a plenty for not just the orange line, but virtually all planned transit lines the DMN Transpo blog has an excellent idea up from the awesomely Texan-named Garl Boyd Latham.

What we are learning is that we actually can’t have our steaky-wakes AND eggy-weggs AND eath them too all at the same time despite knowing full well that transit capacity and hierarchy of service is necessary for the city’s and region’s long-term viability. The world is no longer made of funny money…and this is a good thing. Funny money makes for incredibly (and sometimes indelibly) stupid and short-sighted city planning. It gives us time to pause…and prioritize. What is most important?

Latham’s idea is to finish the Orange Line to the airport and I agree with him that connecting downtown to the airport(s) should be a priority, representing a carfree link to the global economy. If your city doesn’t have that, good luck in the competition of cities of the 21st century.

One issue with the Orange Line as currently planned is that once complete, it will create a logjam of trains on the existing downtown line along with the Red, Blue, and Green all converging along the same corridor of limited capacity and inherent (in)efficiency to move them all through the City. Hence the reason for D2. The thought was that D2 would run through the southern portion of downtown, alleviate pressure on the current line and leverage private investment in the neglected areas of town.

Oooooooh-Kay. Time to rethink. Rather than run a second line through downtown, Latham suggests running the Orange line directly to Union Station, eschewing the train traffic snarl on the current line.

A direct link from airport to Union Station immediately increases Union Station’s significance within the city. Currently, it is an afterthought. If that becomes the single place for businessmen (and women) to catch their ride to the airport, it once again becomes a hub of activity. Furthermore, it is only two blocks from the Convention Center Hotel and provides the opportunity to leverage the value of land around Belo into functional urban fabric.

His other idea is to effectively replace D2 with streetcar. I like this idea for several reasons:

…take whatever money is alotted for D2 and:

1) Run streetcar from Union Station to Oak Cliff as is currently planned.

2) Run streetcar from Union Station down Canton/Young into Deep Ellum.

3) Do NOT move MATA off of St. Paul and extend it past Main Street Gardens to intersect with the new Canton/Young line with plans to eventually run it to the Cedars. 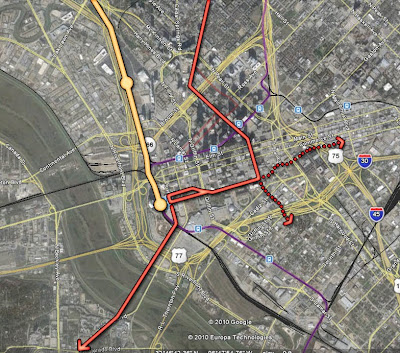 Everything is linked into Union Station, and if we ever plan on having High Speed Rail, Union becomes a true multi-modal facility serving the various necessary hierarchies of transportation in order to properly link downtown with the local, metropolitan, regional, state, national, and international economies and returning “pride of place” back to Union Station as downtown Dallas’s front door to the world.