Eighteen games remain in the Rangers’ 2021 season. The final ninth. But not all baseball hope is lost, right? The ninth hitter in any lineup could do some damage. (In the American League, at least. For now.) The ninth inning in the sport without a clock means there’s a chance.

OK, no. The Rangers were eliminated from playoff contention back on September 3. But, admit it: you thought about walking out of Anchorman 2 before lucking into hanging around for its glorious ending.

1. On most nights, you’ll see a promising young starting pitcher take the ball.

The season began with veterans Kyle Gibson, Mike Foltynewicz, and Jordan Lyles plus rookies Dane Dunning and Kohei Arihara in the rotation. Now? Gibson is in Philadelphia. Folty is on the COVID-19 Injured List. Lyles is in the bullpen. Dunning and Arihara are getting starts as the season winds down, as are two right-handers who have made promising debuts, A.J. Alexy and Glenn Otto. Three others who are at least four years away from free agency–Taylor Hearn, Spencer Howard, and Kolby Allard–have been in the mix as well.

Of the seven, all but Arihara were acquired in veteran-selloff trades. In order of arrival:

Texas hasn’t had a winning record since 2017. But rather than allow its productive veteran pitchers–and Gallo–to hit free agency as Rangers, the club did well moving many of them for pitchers with a chance to contribute for years. (Trades of Mike Minor, Elvis Andrus, Jurickson Profar, Alex Claudio, Nomar Mazara, and Rafael Montero look like potential positives as well.)

COVID-19 protocols led the minor leagues to schedule six-game series this season to cut down on travel. As a result, the Rangers have had their key starting pitching prospects on a seven-day schedule all year rather than the standard five, and they’ve kept Alexy and Otto on that same program since their late-August debut. (Alexy on Mondays, Otto on Fridays.)

There are arguably two positives there. If they’d been pitching every fifth day instead, the two righties would be on far stricter pitch counts each time out. Their staggered assignments also facilitate going with a larger rotation. For now, that means all seven are getting meaningful opportunities to audition for 2022 jobs. That includes Arihara, whose contract lasts another year.

So at least the first half of each game is worth the investment.

At the moment, the Rangers would pick fourth in next summer’s amateur draft. They had the second selection this year, choosing Vanderbilt right hander Jack Leiter who was, by all accounts, the top pitcher in the draft if not the best player. It seems unlikely they would fall out of the 2022 draft’s top four—there’s a five-loss gap between Texas and the fifth-spot Nationals—though only one game separates the Rangers and the team with the third-worst record, the Pirates.

Baltimore is positioned to pick first or second, but the Rangers square off with the Orioles four times next weekend. Baltimore, like Arizona, has lost eight more games than Texas, so it’s unlikely that the Rangers would seize the second pick for a second straight season, but stranger things have happened (including to the Rangers, as a matter of fact). A four-game set between the two teams with the American League’s worst records on the season’s penultimate weekend typically wouldn’t carry much intrigue, but we might end up looking back on it as the four games that helped determine which team ended up drafting a player like Elijah Green, Termarr Johnson, Dylan Lesko, or Texas Tech’s Jace Jung.

Plus, you never know whether Orioles skipper Brandon Hyde might voice his objection if a Rangers pitcher isn’t working quite as quickly as he’d like.

Jace’s older brother Josh, the Rangers’ first-round pick out of Lubbock in 2019, has had a tremendous year, solidifying his standing as one of the organization’s top two prospects alongside Leiter. The third baseman has hit 15 home runs in a mere 63 games between the farm system’s top two levels, batting .302 with a .938 OPS that speaks to both his power and his plate discipline.

But, barring injuries to both veteran Charlie Culberson and rookie Yonny Hernandez, Jung is almost certainly not coming up to Arlington this month. The key reason is that the league’s collective bargaining agreement dictates he doesn’t need to be added to the 40-man roster this winter, so keeping an extra spot open would allow the Rangers to roster a different prospect who’d otherwise be available for another team to swipe. That would also enable them to make a decision on whose spot Jung can take after a full spring training, if not the early part of next season.

We don’t root for injuries around here. But watching these last games of the season and envisioning Jung at the hot corner next year and another six or 10 after that? Allowed.

Aside from the young pitchers who will get the bulk of the team’s starts the rest of the way, there are other young players whose innings and at-bats should matter to Rangers fans hoping for better things moving forward. The brutal, 95-loss 2014 season (after four straight years of playing past the 162-game schedule) gave the first significant big-league experience of their careers to interesting players including rookie Rougned Odor and… and… OK, yeah, rookies Ryan Rua, Nick Martinez, and Alex Claudio, and… hmm… 30-year-old Robinson Chirinos and 31-year-old Guilder Rodriguez.

There are more young players getting extended opportunities now who could be factors in the coming seasons. After early-season struggles led to Triple-A demotions, Leody Taveras and Nick Solak have been much better since returning. (Same with Andy Ibanez and Eli White, but both are done for the year with injuries.)

Adolis Garcia hasn’t been nearly as dominant since his All-Star Game appearance, but he’s rounding out one of the most unlikely seasons of any hitter in the game. The final numbers won’t reflect how good D.J. Peters has been the last month or so, both in the outfield and as a home run threat. Nathaniel Lowe, Jose Trevino, and Jonah Heim are finishing off the heaviest workloads of their MLB careers and should go into 2022 with jobs to lose. 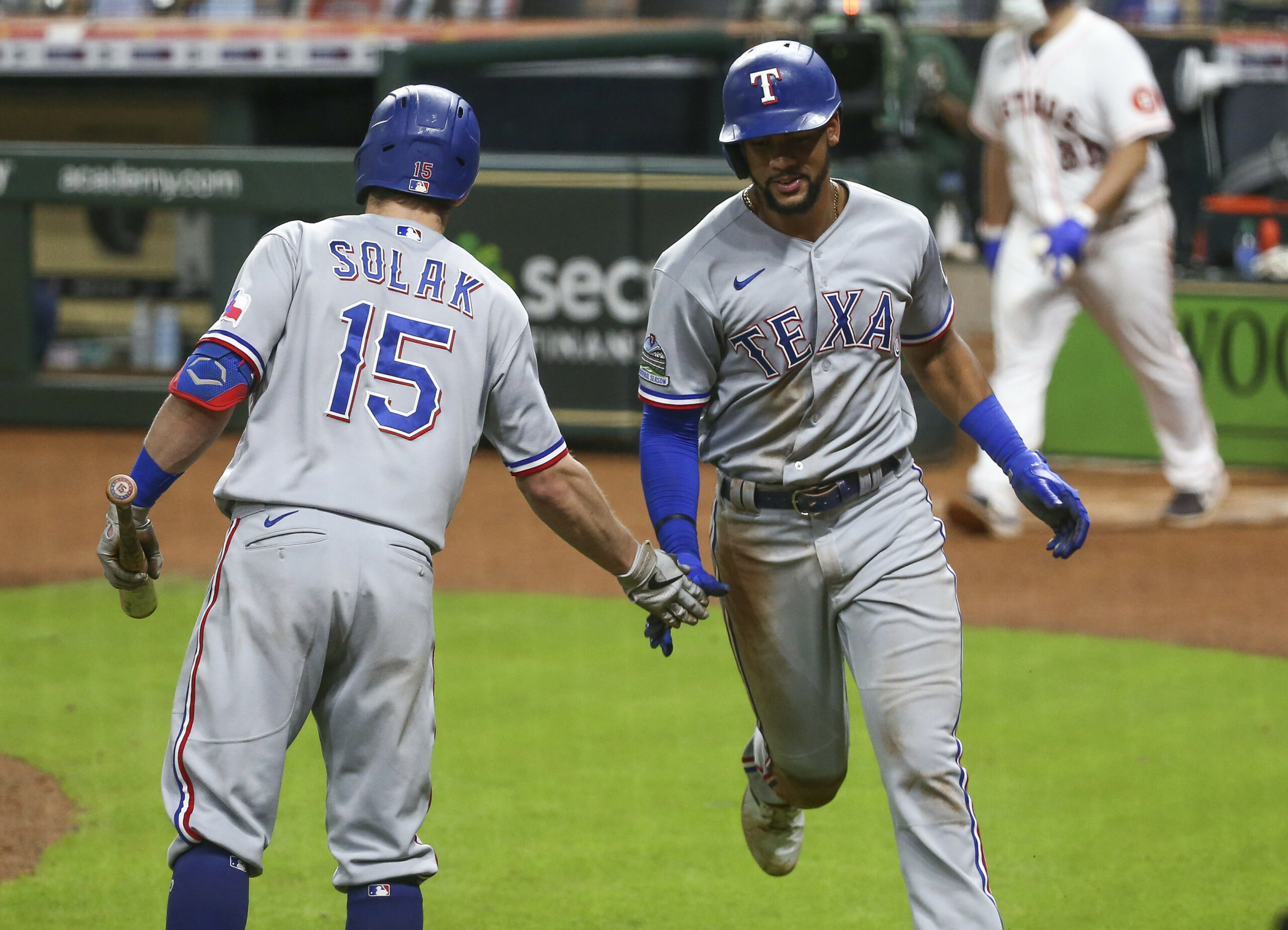 Joe Barlow has been a revelation in the bullpen. Fellow righty reliever Nick Snyder—like Barlow, a small-college position player whom the Rangers converted to the mound—rocketed through the system this summer, moving from Class A to the majors with command of a 100-mph fastball and wipeout slider. He’s sidelined for the rest of the season with elbow discomfort, but he should be ready, perhaps along with a returning Jonathan Hernandez and Jose Leclerc, to add a power component to the late innings in 2022.

If you were among the 19,686 on hand on the final day of the 1986 season at Arlington Stadium to see Pete Incaviglia set a franchise record with his 30th home run, wouldn’t you like to say you were also in the (nearby) building, or at least tuned in, for Garcia’s Ranger-rookie-record-breaking 31st dinger 35 years later?

I mean, anyone can be among the 350,000 claiming to have been there when Neftali Feliz froze Alex Rodriguez to send the Rangers to the World Series. Be different.

There are museums built to remind us of our hardships and leaner times, the adversities through which character was unveiled and from which greatness emerged.

The Rangers haven’t lost 100 games since 1973. Tune in to see if they can stave off that mark this year–or, if they can’t, embrace rock bottom so that the eventual return to pennant-race baseball is that much sweeter.

On the home schedule alone, games remain against two of the three best teams in the AL (the Astros and White Sox) and the greatest attraction in the game (the Angels’ Shohei Ohtani) before Texas hosts the final series ever to be played by the Cleveland franchise in the 107 years it called itself the “Indians.”

Yes, there are a couple of Nolan Ryan Beef Dollar Hot Dog Nights left on the schedule and a pair of $1 Blue Bell Ice Cream Sundays to go. But circle this Saturday, when the Rangers treat the first 7,000 fans to a “Woodie Hoodie.” You might be wondering if it’s going to be one of those cool black-and-gray pullovers with cutoff sleeves that has become the Rangers’ manager’s signature game day look. I’m instead wondering if I’ve been wrong all this time in spelling it “Woody.”

I’m not much looking forward to six months without it around here. That’s a long time to wait for Carlos Correa in the powder blues.